An educational design language is “a tool that designers use to communicate designs, plans, and intentions to each other and to the users of their artifacts” (Botturi, 2006: 268). “Notational systems, used in mature fields of study, are closely related to design languages. The future of a technological field depends on the ability to communicate ideas and changes with others in the field. Instructional technology is one field that can benefit from a notation system enabling designers to duplicate, execute, and communicate their ideas” (Waters & Gibbons 2004: 57).

Daniel K. Schneider doesn't know much about the history of educational design languages. I have the impression that their emergence is tied to computer-based training (Bork, 1984) and in particular drill and practice programs where flow-charts were used to define educational sequences.

Implicit design languages also were defined by authoring environments and that culminated in systems like (the now dead) Authorware that supported a visual design/programming environment. There exists also a link to instructional design methods, in particular Instructional systems design methods like ADDIE where at some point designers create scripts and/or flowcharts.

His book defines a written notation, but also used flow diagrams. E.g. he defines the flow of Minimum Instruction with the following kind of diagram: 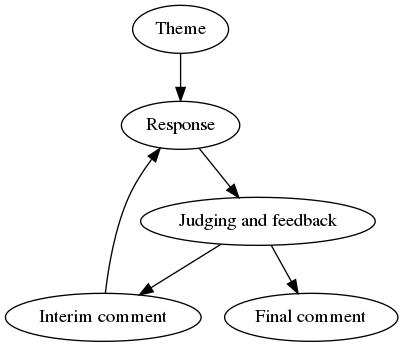 IMS Simple Sequencing (IMS SS) can be considered as being in that tradition, but we are not aware if there exist attempts to use a visual design language to define simple sequencing modules. Despite that fact that IMS SS is part of SCORM 2004 profile, we didn't find any authoring tools...

More recent trends (since the early 2000's) are much more oriented towards a model based on a "play" (theatre) metaphor. IMS Learning Design (IMS LD) is today's most popular formal language in research and it is based on Koper's Educational Modelling Language (EML) informally published in the early 1990s. Several visual design languages create within research projects compile into IMS LD. Other design languages either do not rely on a formal language or adopt another formal representation. A joint information model of EML-like approaches was proposed in a workshop document (Koper, 2002)

This UML diagram basically states that educational modeling means defining activities where persons playing a role produce outcomes using resources. Some of these resources are environments (tools). The activity can be divided into objectives, prerequisites, sub-activities (the activity structure). Support, learning, other and outcome are kinds of activities.

Most current educational design languages adopt some kind of "activity flow" approach. Designs for educational sequences then can be defined with several notations, for example:

In practice, design languages are rarely used. Several factors could explain this: Tools are difficult to use and at the same time there is a lack of training opportunities, in particular in teacher schools. Most tools are badly maintained and difficult to find. Tools that can exectute designs barely exist or again, they hardly work. Finally, industrial designs are simple (both in industry and academia) and more complex designs are put in place informally by individual teachers.

This list lists systems for educational design through more or less "natural" categories. We don't include just design languages or design tools, but all kinds of systems that in one way or another support pedagogical design.

IMS Learning Design is a formal language (UML and XML) that is standardized. Designers are not really expected to directly use this language, it's rather expected that they use a high-level editor that then can export to IMS LD. In the same way the e-learning content editors don't need to understand SCORM 1.2.

4.2 Design tools that can export to IMS-LD or another executable formalism

There exist several variants. This category includes both visual design tools and form-based editors. Some of them can export to IMS LD. Some are general purpose and some like Collage are specialized. Some tools are operational, some just research systems.

Some designers use one or several UML languages like UML activity diagrams. Other extend the UML framework and others use their own notational system. Most of these systems are only used by a very small population. Except for the UML tools which are popular in computer science, these languages are all very recent. Usually, they don't produce executable code.

Same as above, but easier to use, since not formal. Doesn't produce executable code.

Attempts to enlarge or to modify the IMS-LD framework. These projects include their own meta-model (i.e. their representation of what a pedagogical scenario is) plus a toolkit for design and execution. Most are still very much under development.

4.6 Design and execution systems in production

IMS Simple sequencing is a formalism that supports mastery learning. It is included in the SCORM 2004 profile (version 3 and later), but it is very difficult to find an LMS and design tools that support this standard.

4.9 Systems that focus on the semantics of contents

These formalisms and associated tools allow to create pedagogical documents with semantic structure (and therefore markup).

These systems are often included under "teacher tools", i.e. tools that allow a teacher to prepare lessons without too much insisting on detailed scenario design.

Most of these microworlds are considered to be an expressive digital medium for the learners themselves. Nevertheless, the teacher also can create pedagogical designs like simulations or CSCL scenarios for use by learners. Or he can use these as demonstration tool. He also can create half-baked models that are then given to the learners for further work. Some examples are:

Web sites to share designs and scenarios. There exist several types. Some tools just point to an associated learning object repository. Sometimes the tool integrates direct access to the repository. Here are some examples

1. Issues are critical aspects that should be considered in the definition of the experimental setting. They are: context sensitivity, eclectic benefits, course quality, and time.
2. Elements are indications for the identification of key variables in the study. They are: impact on sub-activities, communication events, institutional changes, and expressive power.”

To that we would like to add another most important one: To what extent is the system available, operationable, documented and maintained ?

Finally, we would like to argue that such top-down evaluation schemes should be complemented by idiographic methods, e.g. repertory grid technique based analysis.