eLML emerged from the Swiss Virtual Campus GITTA project. Based on a selected pedagogical concept the team developed a DTD (later an XMLSchema) which described exactly what a GITTA lesson could or should contain and in wich order. After nearly three years of using and improving the GITTA structure, it was decided to make both the DTD (now an XMLSchema) and the corresponding XSL files to create both HTML and PDF public.

Compared to Gerson's Explain, Clarify, Look, Act, Share, Self Evaluate/Submit it focuses more on individual learning, i.e. there is no sharing aspect and self-evaluation is reduced somewhat.

“The original ECLASS model was slightly modified and e.g. additional elements like glossary, bibliography and metadata were added to be able to create a self-contained e-learning course. Furthermore the three elements clarify, look and act together form a so-called "learning object" and these elements can be used in any sequence order and can even be used multiple times within one learning object. This allows that an author can start with an example (look) and then follow by explaining the theory (clarify) behind it or the other way round. Also the uncommon but sometimes very successful approach where the student starts with a short exercise (act) and only after having tried out some solutions can read the theory (clarify) behind it and see some real world examples (look). The ECLASS model is on one hand flexible enough to represent different learning scenarios and to meet all the requirements needed by the creators of the e-learning lessons but ensures on the other hand that the content complies with the defined didactical guidelines.” ([1], retrieved 19:05, 30 May 2007 (MEST))

The XML structure of eLML in detail is the following: 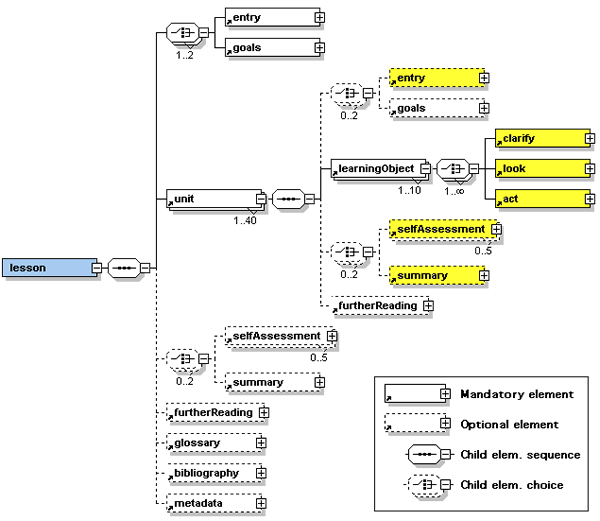 “An eLML lesson always starts with either the mandatory introduction (element entry) or a concise listing of the lesson's learning objectives (element goals). The unit elements, described below, contain the actual content of a lesson. Following the units a lesson can have a summary and/or up to five self-assessments followed by an optional further reading and glossary section to list important resources and to describe terms used within the lesson.” ([2], retrieved 19:05, 30 May 2007 (MEST))

“Within each unit a similar structure as on lesson level is employed. However, the elements glossary, bibliography and metadata are always defined for the whole lesson on lesson level. The actual content within a unit is stored in a number of so-called "learning objects" (not to be confused with the learning objectives - called "goals" within eLML). Each learning object describes a certain concept, model, equation, term, or process using all or some of the three elements clarify (theory), look (example) and act in free order. These three elements can have a special visual representation when transformed into a presentation format - e.g. a "gear" icon for act elements as used in GITTA to signalize the student that he or she has to "do" something - but their main purpose is to guide authors while creating content. Using the elements clarify, look and act, the author has to think about how a certain concept can be presented best to the student. Whether a learning object starts with some theory (clarify element) and continues with one or more examples (look elements) or, alternatively, the student first has to do something (act element) and then reads the theory afterwards (clarify element) is left to the author.” ([3], retrieved 19:05, 30 May 2007 (MEST))

4 The eLML architecture and software

elML is an authoring toolkit that doesn't need a specific environment.

Contents are either produced directly with an XML editor or else created with HTML, Flash, SVG, etc. and then assembled with eLML.

eLML is a free and open source project (download from eLML SourceForge Page. Since 2005 the Multimedia and e-Learning Center (MELS) at the University of Zurich uses eLML as their main development platform. So, it's a life project. (Daniel K. Schneider 19:05, 30 May 2007 (MEST)).

The elml.xsd file is the heart of the eLML structure. All the main elements are defined within this XML Schema.

Here is a summary of the XSD structure (the full contents or the XSD file are too long to be displayed here). 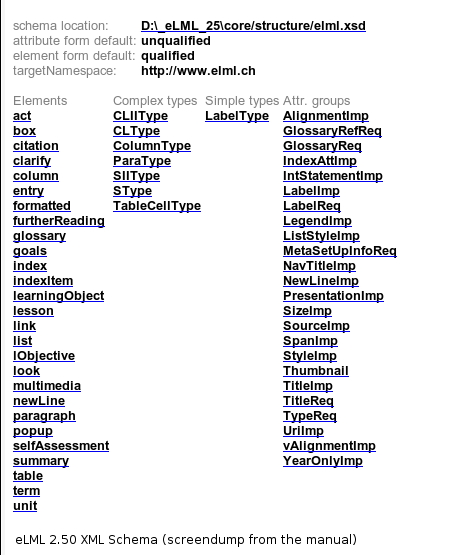 The lesson element can be described with the following diagram

The online manual provides an idea on how one might structure a eLML authored course. Otherwise, download eLML and look at the example courses.

The download includes this folder structure (including all the necessary xsd, xslt, etc. files), an XML Schema reference, examples for courses.

To insert elements use the right-click contextual mouse menus or the bar at the bottom.

Below is a screenshot from an older Beta version. 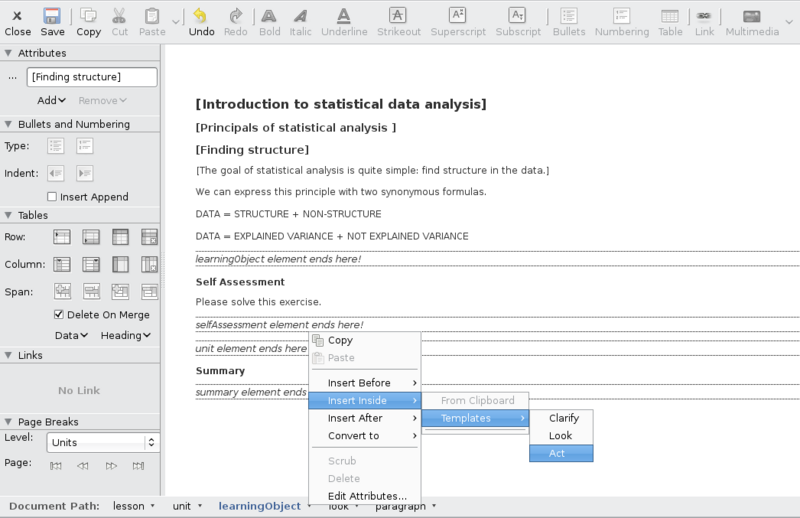