GLUE! is a middleware architecture that allows a lightweight integration of existing external tools in existing Virtual Learning Environments (VLEs) like Moodle or LAMS.

GLUE! allows educators to control the creation and configuration of external tool instances within VLEs and their automatic assignment to VLE users depending on their roles and the groups they belong to; that reduces the time and complexity required to instantiate non-trivial collaborative learning situations within VLEs. Afterwards, students logged in the VLE find their corresponding tool instances; That facilitates the enactment of collaborative learning situtations.

“The leftmost and rightmost GLUE! tiers make use of the well-known adapter pattern [Gam95] to respectively wrap VLEs and tools, also adapting their specific and heterogeneous contracts to two generic and homogeneous intermediate contracts: the GLUE! integration contract for tools, and the GLUE! integration contract for VLEs; these contracts are detailed in sections 3.4.2 and 3.4.3. These type of software adapters, which were also employed in some recent two-tier research integration works (e.g. IMS LTI or Basic LTI) to enable the integration of VLEs and tools without modifying their implementations, are called VLE adapters and tool adapters in the GLUE! architecture.” (Alario Hoyos 2012:75) 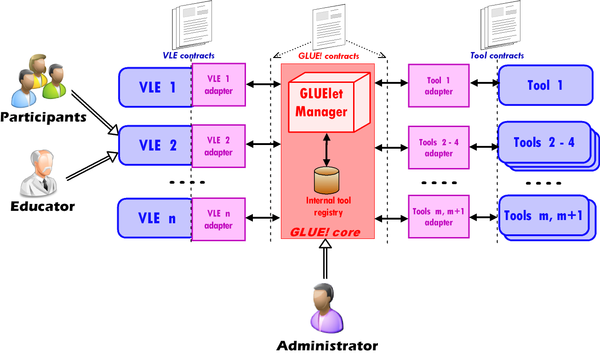 Picture of the reference implementation presented in Hoyas (2012) 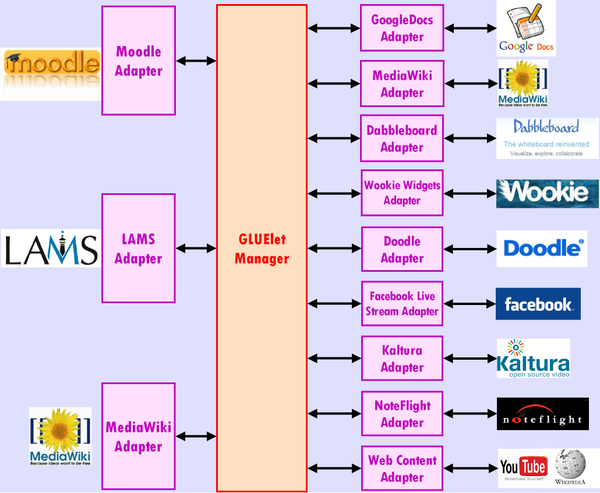