Collaboration scripts are the most important design elements in computer-supported collaborative learning (CSCL) and aim to support learning activities by structuring otherwise deficient interactions. “A script describes the way students have to collaborate: task distribution or roles, turn taking rules, work phases, deliverables, etc. This contract may be conveyed through initial instructions or encompassed in the learning environment.” (Dillenbourg and Jermann, 2007).

“Scripts are methods that structure collaborative learning with the expectations that structured collaboration is more effective than free collaboration. They foster the emergence of knowledge productive interactions such as argumentation and explanations. The mechanisms that foster these interactions are expressed by a generic principle: the script 'splits' the team with regards to knowledge or roles and this split leads group members to make engage more interaction to complete the task despite the split. The nature of the 'split' determines the types of interactions that will be necessary to engage to overcome it. Hence, this principle is termed' split where interactions should happen' (SWISH).” (Dillenbourg and Hong, draft version).

“A script disturbs the natural convergence of a team and in doing so increases the intensity of interaction required between team members for the completion of their collaborative task. The nature of the perturbation determines the types of interactions that are necessary for overcoming it: for instance, if a script provides students with conflicting evidence, more argumentation is required before students can reach an agreement. Tools for authoring scripts manipulate abstract representations of the script components and the mechanisms that relate components to one another. These mechanisms are encompassed in the transformation of data structures (social structure, resources structure and products structure) between script phases.” (Dillenbourg & Hong, 2008: 5)

According to For Kollar, Fischer, and Hesse (2006), collaboration scripts consist of at least five components:

See also the "Kobbe model" below.

These kinds of scripts are embodied in different sorts of CSCL environments that shape group interaction, e.g.

Harrer, Bollen, and Hoppe (2004) use of script refers to another pedagogical method: student's post-hoc analysis of the interaction log files. Scripts as description engage learners in reflective activities that can reinforce internalization of external scripts for example.

Dillenbourg and Jermann (in press) distinguish four levels of abstraction, from highest to lowest: Script schemata, classes, instances and sessions.

In CSCL sequencing refers to the definition of learner activities. Most activities occur in linear order but contain loops of activities with minor variations. The most prominent principles for activity loops are:

Dillenbourg (2002) defined five levels of coercion, that we present with slight modifications in increasing order

Besides the Kaleidoscope models described below, there are attempts to use/extend IMS Learning Design.

An other technique is to use design patterns to describe scripts. The best known example are collaborative learning flow patterns and its Collage editor that will produce IMS LD.

Kobbe (2006) for the Kaleidoscope CSCL SIG identifies components and mechanisms of CSCL scripts and also formulates a few guidelines for describing collaboration scripts (so that they can reused by other researchers or practitioners). This section is mostly just a summary of the original Kaleidoscope report - Daniel K. Schneider.

The authors distinguish between:

This reminds a bit the distinction between components and method in IMS Learning Design.

Fischer, in a EIAH 2007 talk (videos available) identifies the CSCL core script components and mechanisms like this: 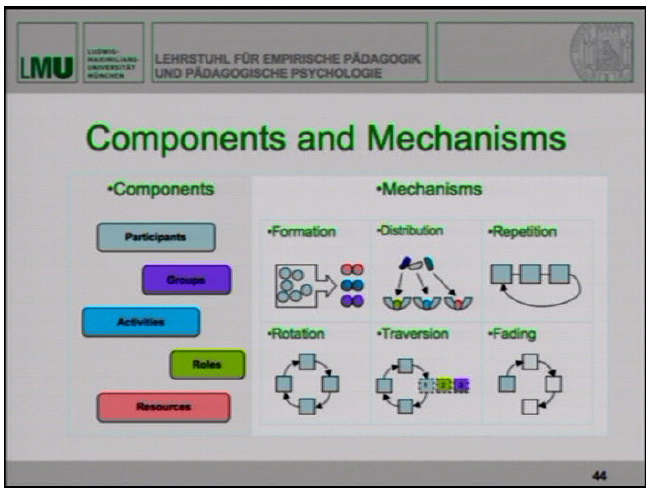 Participants are used in synonym with users, persons or people, i.e. it is used as a general abstraction of concrete individuals

Groups form a hierarchical structure with larger groups (at least one, i.e. the class) composed of one or more smaller groups. Participants can be grouped according to various criteria defined by the design rationale.

The main function of roles in collaboration scripts is to refer to specific participants when assigning activities or allocating resources. Roles are also associated with privileges, obligations and expectancies.

CSCL is more interesting in higher level learning and in particular (but not exclusively) in activities that engage learners in collaboration through some kind of scripted workflow. Specification of effective learning activities is an improvement to merely setting the conditions for collaborative learning, but doesn't guarantee adequate cognitive processing not to speak of effective learning results. Problems can be categorized in in lack of epistemic quality (appropriate strategy), elaborateness (richness and interrelation of information) and transactivity (operating on each other's reasoning).

Activities form a hierarchical structure in which any greater activity can be decomposed into lesser, more fine-grained activities, and any lesser activity can be subsumed by one or more greater, more low-grained activities. For instance, discussing can be decomposed into explaining, constructing arguments, question asking, etc., and asking somebody to check a report for mistakes can be generalized as help-seeking.

In most cases, group formation simple, such as forming groups by amount (e.g. dividing a class into four groups) or by size (e.g. dividing a class into groups of four). But some scripts require principled composition of groups, e.g. mix different nationalities or skill levels. Recent work have shown that adequate group formation is one of the key factors to produce adequate collaboration and leverage the results obtained by CSCL scripts (Isotani et al, 2009).

Components have been described above. In CSCL the most important components to think about are roles and role parts (associated activities). Decomposable activities can be distributed in a way that one learner engages a cognitive activity while the other learner engages in a supportive metacognitive activity. Resources also can be distributed in various ways, e.g. providing participants with only one part of the information that they need in order to foster knowledge exchange with each other.

Sequences specific linear sequence of activities, but also repetition of activities with minor variations. The most prominent principles underlying such repetitions are traversion, rotation and fading. A traversion describes a repetition in which all elements of one set are looped through, with only one element being in use at a time. A rotation permutates the order of elements in a given set Fading refers to features that are gradually added (faded in) or removed (faded out) from a script.

First of all, consider the kinds of loops or repetition in your script. Do the participants traverse through a series of elements in a set (e.g. chapters in a book, levels in a game)? Do the participants rotate roles or resources? Do you find a repetition with changes that resembles fading (in/out)? Once you have discovered these loops, try to distinguish between different social planes, i.e. classroom, small group (if you have more than one kind of small group, you need to distinguish these, such as the case group, theme group and country group in the Universanté script) and solitary (individual) work. Always try to describe the interaction within this social plane, i.e. if you refer to members of a small group, describe it as "Within each small group, all participants ...". If you refer to the interaction between small groups describe it as "Within the class, all small groups ...". Thus, the "within" clause defines the scope of activities that you talk about. This way, you use a group perspective to describe the sequence of events that takes place.


Now you assemble the sequence of blocks by stating the social plane and (if needed) the kind of repetition, such as "Within each country group, and for each theme group in turn, ....". Then use activities that produce something, such as "write a summary", "propose a solution", "fill out a questionnaire", "give an argument", etc. This way, you can refer to a product when you describe the next steps in the activity sequence, such as "reads the summary", "critiques the solution", "corrects the questionnaire", "responds to the argument", etc. Using such products allows you to describe some kind of "data flow" between the activities. Be careful to stick to the names and terms introduced. The general structure of the sequence begins with specifying the social plane that you are referring to (e.g. "Within the theme group") and then specifying the activity on this social plane. If there is a sequence of activities, form a paragraph like:
Within each country group, ...
... the members of the theme group present their fact sheet
... everybody else provides comments on the fact sheets
... the members of the theme group modify their fact sheet according to the comments

(to be done later)