Taverna is a workflow toolkit that is mainly used in e-science projects, e.g. myExperiment. As of 2010, Taverna has mostly focused on supporting the Life Sciences community (biology, chemistry and medical imaging).

“Taverna allows for the automation of experimental methods through the use of a number of different services (such as Web services) from a very diverse set of domains – from biology, chemistry and medicine to music, meteorology and social sciences. Effectively Taverna allows a scientist with limited computing background and limited technical resources and support to construct highly complex analyses over public and private data and computational resources, all from a standard PC, UNIX box or Apple computer.” (What is Taverna?, retrieved 13:14, 17 June 2010 (UTC)).

“Taverna is an open source family of tools for designing and executing workflows, created by the myGrid project and funded by OMII UK, the EPSRC, BBRC, ESRC, JISC and Microsoft. The workbench includes contributions by the Moby Consortiumm and the University of Twente. The family consists of the Taverna Engine (the workhorse), and the Taverna Workbench (desktop client) that sits on top of the Engine.” (Workflow Type: Taverna 2, myExperiment, retrieved 17:11, 14 June 2010 (UTC))

See also myExperiment, a repository for scientific workflows and other objects, which is integrated with the Taverna workbench and the Kepler workflow system, a different system.

Taverna explains its workflow architecture by first quoting the Free on-line dictionary of computing: “2. <job> The set of relationships between all the activities in a project, from start to finish. Activities are related by different types of trigger relation. Activities may be triggered by external events or by other activities.” and then translating this principle into an operational, computational definition: “the definition we adhere to is: the co-ordination of one or more services into a data analysis pipeline. This is treated as one entity, or a workflow.”

Each activity (also called operation) is implemented as a service that can take inputs and produce outputs. An output then can be linked to another service as input and so forth. This principle is illustrated with the following example:

Most operations are primarily located on other machines, typically a so-called web service. “The role of Taverna is to remove the tedious parts generally associated with general data analyses, e.g. removing the need to cut and paste data, press buttons on forms etc. Although Taverna does not access Web pages itself, you can behave as if it is using this approach. Each service (as a replacement for the Web page) is provided by an institute that has some code you can run, without actually having to own or possess the code. All you have to do is point Taverna to the location of the interface to the code. This is typically a URL that contains a WSDL (Web Service Description Language) file. A WSDL file describes how a client program (Taverna) can access a piece of code (located on remote machine).” (What is a workflow, retrieved 13:14, 17 June 2010 (UTC)).

Taverna is comprised of three tools:

(1) Taverna Workbench provides a desktop authoring environment for scientific workflows and access to the execution engine. The workbench can be called a superclient. In the same way that a web browser can access various contents from the web and a local PC, Taverna allows to plumb together services available from the web and locally.

(2) Taverna Enactor, the excution engine that takes a Taverna workflow and executes it using the data provided by the user, over the services described within the workflow. Workflows can be executed through the workbench, via command line, by a remove server, as service, etc.

(3) Simple Conceptual Unified Language (SCUFL), the taverna dataflow language. It is encoded in XML and graphically available in the Taverna workbench.

(4) In addition, Taverna is strongly tied to myExperiment, a web based application to share Taverna and other scientific objects built on the Ruby on Rails platform. myExperiment may be accessed directly through the workbench. 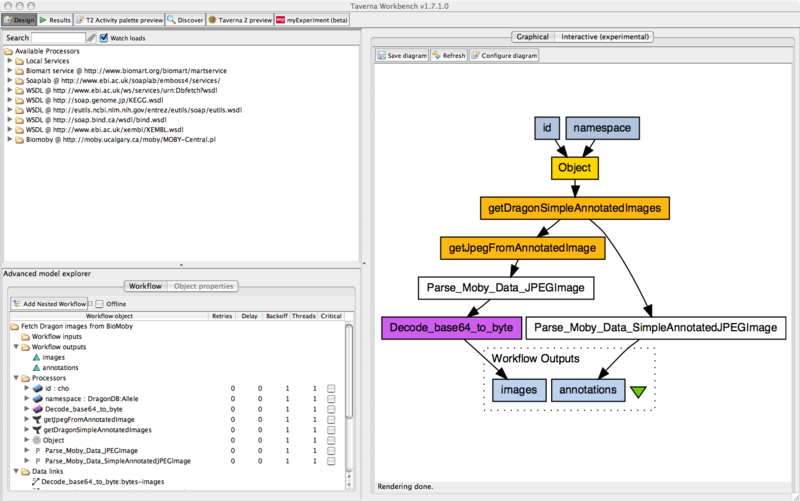 According to Oinn et al. (2004), the principles behind the Scufl language are captured in the origin of the acronym: simple, conceptual, unified, flow language:

Simple. The language aims to be as simple as possible. The target user communities have domain expertise and domain problems to investigate; their interest in programming is secondary. Conceptual. A Scufl workflow should match the users' conceptual model of their problem. Implementation detail should be kept to a minimum, by exploiting techniques such as introspection over service descriptions. Unified. Coordinating web services was the initial motivation. However users want to treat these and other services, which are essentially the same from their perspective (e.g. grid services, local applications), in a unified manner. Flow Language. The basic conceptual model is of a network of

The end-user (researcher) doesn't need to know SCUFL, since there is a graphical workflow design editor. Below is sample SCUFL v0.2 file found in the Taverna Design Guide at cagrid.org (retrieved 14:22, 29 June 2010 (UTC))

The Scufl based workflow description file above is represented in the figure below:

Example Workflow as it would appear in Taverna Workbench, version ??? 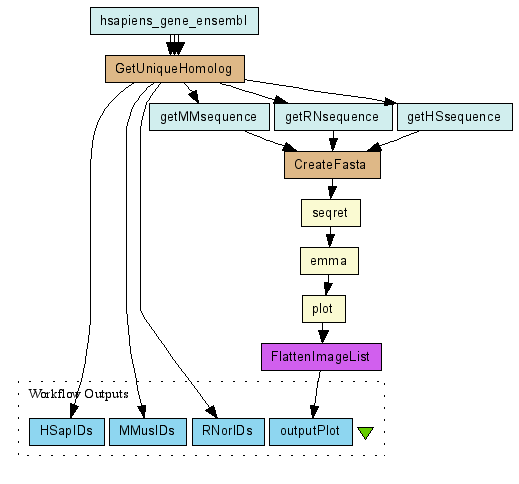 Using Biomart and EMBOSS soaplab services, This workflow retrieves a number of sequences from 3 species: mouse, human, rat; align them, and returns a plot of the alignment result. Corresponding sequence ids are also returned. Source: http://www.myexperiment.org/workflows/821 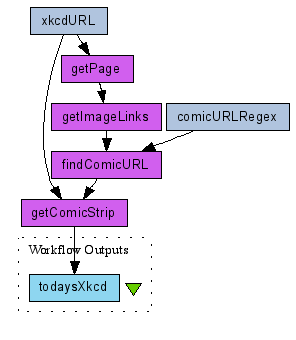 Use the local java plugins and some filtering operations to fetch the comic strip image from http://xkcd.com/. Source: http://www.myexperiment.org/workflows/824