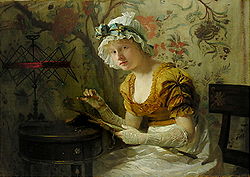 Typical embroidery software allows to create embroidery design files that define parametrized embroidery objects such as lines, sating columns or fill areas. These objects can be created directly through technical drawing or be translated (digitized) from vector drawings. From embroidery objects one can generated stitches that then can be exported to proprietary machine (stitch) formats that can uploaded to an embroidery machine.

Roughly speaking, we can distinguish between several types of software, although sometimes the frontiers are blurred, so you also can consider the following as list of modules that your software should have.

2 State of the software industry

Now a subjective (personal) opinion about the embroidery software market: It is very difficult to find out what software costs and - this is funny - where and how to buy. Some companies (like Bernina) seem to sell only through authorized resellers. Other companies have snotty sales people. E.g. email support from Wilcom wouldn't give a person from university of Geneva (who runs this wiki) the name of a Swiss dealer and even were implying that we were not smart enough learning their entry-level professional tool and showing our students how it works. Probably these guys never encountered any other drawing software or they might have a different idea of what "difficult" could mean. We regret to say so, but learning basic use of advanced embroidery software is easy for a technical person and takes no more than two weeks full time. Producing professional embroidery designs is more difficult and may take at least 7 years (but so does professional cooking, car racing or web page design ...)

Anyhow, we found out that most high-end consumer software is in the $1500 to $2000 range. Entry-level professional software also starts around $2000. I can understand that professional software costs $10'000 or more, but I have trouble understanding why what I consider mid-level prosumer software costs over $2000 since selling it cheaper probably would entice many more people to buy it. That being said, I do have the money to purchase, but I won't buy anything for which technical documentation can't be found (more about that a few lines down...). At least some companies, e.g. Sierra, offer extremely nice conditions to education.

I also noticed that too many embroidery websites do have HTML/JavaScript coding errors, e.g. some pages won't display on modern browsers. Not a good sign! Incompatibility and lagging behind technology is another problem. Often (according to forum complaints) does embroidery software have problems running under recent Windows versions. Some websites for high-end prosumer software (e.g. Bernina's and Wilcom's) seem to be well-made but do not provide any real feature list. On the opposite, Embird has a fairly ugly website, but it's fast, fully functional and even includes useful information. One could relate this site's web design philosophy to the facts that Embird software probably offers the best price/performance ratio besides (Stitch Era from Sierra) and that it is probably the most popular software suite for embroidery.

Most software includes machine-specific features. On older machines, one has to pay attention to connectivity. Some machine types use specially formatted memory cards or USB sticks (or some other weird specifics) and do require special software to write CNC files. Usually this type of software is offered for free (either when you buy the machine or for download). The same software then also can convert, resize, rotate and preview. See converting software below. A more "exotic" feature concerns support for jumbo-hoops, i.e. hoops for large designs that don't really fit onto the machine and that must be turned in the middle of the process. The software should allow splitting a design in a correct way and also insert a message to user so that he/she can rotate the hoop.

Important: If you plan buying any sort of design software, you should check if your type/brand is directly supported, i.e. if the software can export a design to model-specific file formats (like *.art, *.jef, *.pes, etc.). If it cannot, you then could use a converter, but this may be a lossy process and you will loose time. I couldn't find any serious information on how well various converters work. Therefore, I suggest finding out what other embroidery software is produced by the company providing the converter. E.g. Wilcom creates software for both Bernina and Janome. Therefore we might hypothesize that their free Truesizer converter program ought to be able to translate an .ART file (output of Bernina V6) to *.JEF (Elna/Janome machine format) without any mistakes.

We couldn't find any up-to-date (Spring 2011) list that includes any sort of serious comparison of embroidery software. The best one we found was Understanding Digitizing Software, made by Floriani (2008) and was just a feature comparison, not a serious evaluation. Add the various numerous obscure file formats and you find yourself in a software jungle that is hard to beat in terms of inaccessibility, obscurity and overblown prices.

Some might argue that there isn't any non-financial reason to buy anything else than brand-specific software since almost every brand does have a more or less high-end consumer design suite. Unfortunately, some brand-specific software can do more that others. E.g. from looking at the sales flyers, Bernina's V6 is much more powerful than Elna's V3 or Janome Pro. The latter do not integrate typical object-oriented vector drawing features if we understood right. For techies, vector graphics is simply a must have feature since we already are used to vector drawing. Of course, importing vector graphics from another program would be an option for experts in embroidery, but it is not for beginners since one has to round trip a lot between various stages of a part design.

In conclusion, in the absence of any serious information on embroidery software, we decided to invest our efforts in the free Stitch Era Universal. We then later bought the Pro "liberty" version. Since July 2013, there is no more free version. However, the formerly free version is now available under a 6-month inexpensive rent program. Retrospectively (fall 2011/fall 2013/winter 2018), we do believe that the Stich Era route is the way to go if you plan to learn with an ambitious state-of-the-art program. The Pro version only has few extra features, and it will load faster. The cheap for rent versions are limited to 12K or 40K stitches (the latter is quite a lot). Education gets very conditions. You only will have to manage vouchers and the fairly long download process.

There exist virtually no totally free design + digitizing tools that are fully functional. As of Spring 2022, there exists only one functional embroidery design software, i.e. Ink/Stitch. In addition there exist software tools that require good programming skills.

(Comment from Tatarize) Though, after authoring pyembroidery I did get a ban for telling Lex Neva that he was "doing it wrong" in reference to his stitch simulator. He took offense at being told he was doing it wrong, and more offense at proving that doing it correctly is very possible, he extended the ban, and spun off his own version of pyembroidery so as to "not have to deal with me". -- Inkstitch, it does have a community around it. But, also the drama involved with that.

In Inkscape, the extension is available in Extensions->Render->Embroider
Only works, if you create a drawing with filled regions that are converted to pathes and are not grouped. (So no grouping, no strokes, etc. !)
Result *.exp will sit in your home directory or some other place ...
I managed to create a stitched oval and display it with some *.exp viewer. - April 2011.

It is difficult to find out who produces the software (as opposed to selling it), how much it costs, and (again) what the software can really do. Some websites are too heavy on useless pictures, light on information and difficult to navigate. In addition, more than one product may be advertised on totally different web sites which is quite confusing. And even when the products claim to be different they can be white labeled version of the same software. I find it interesting that at least three products are based on Corel Draw and I wonder if there is some common code base. Also, many modern programs can at least import from Corel or Illustrator by copy/pasting or some OLE mechanism.

Most sewing/embroidery machine makers sell their own custom software suite. Most of these packages also work with other brands, i.e. they can digitize into more than one format and write to several types of cards or otherwise communicate with a machine.

High-end "prosumers" (advanced home users) software superficially may look quite the same as entry-level professional software, but there seem to be the following differences:

Good examples are Bernina embroidery software V6 made for the home market and Wilcom DecoStudio made as entry-level professional tool. Both are made by the same company and both are extensions of Corel Draw. Bernina's software is cheaper, is based on an older and weaker Corel version, but it does support other machine formats than their own. I.e. strictly from looking at specifications, one could qualify it as the advanced home user tool. However, we don't know how it would scale up against cheaper suites like Stitch Era and DrawWings (see above).

5.1 Rather cheap general purpose software for the consumer market 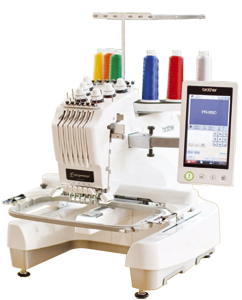 5.2 Sold by brands for the home market

That type of software is not really brand-specific, but it is sold by embroidery machine brands.

As of 2017 there are, in addition to countless apps that simply attempt to sell pre-digitized embroidery, a number of apps for android and ios with the express purpose of embroidery.

Both services appear to be different than any traditional photo digitizing services which usually involves using software and an artist's skill to digitize the relevant elements of image. Neither service has software available or much in the way of detail.

8 Free converter tools and other utilities 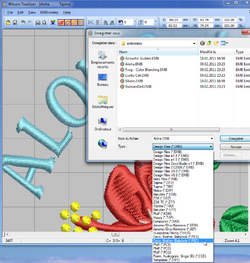 I suggest explore the following Pulse Ambassador (online)and myEditor. Then pick the one that you like best. Also, each can do at least something that the others can't. Read on ... 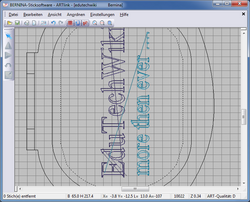 Screen shot of Bernina Artlink 6 (Unconvincing model made with Embroidermodder)

will get all *.PNG files in the inkstitch-list-sim directory and then create a file with 80x80 tiles

Below is a provisional list of useful features. Certain items are missing, others will need explanation. Also, wording should be changed for some items once we get a better picture.

Due to reorganization - i.e. the breakup of the Computerized embroidery page - names of original contributors, in particular Tatarize, Jrouquie and Cybermancer do not apprear in the history of this page. But they are not forgotten !