This article deals with needles used in machine embroidery. The choice of a suitable needle or not influences the result of an embroidery. The article defines the most important elements that define a needle, their main types and their use.

Some information needs to be checked and improved, so take your precautions! In particular, I have to check if there is a difference between an Organ 130/705 SES and a DBxK5 SES (I believe so).

There are two needle manufacturers that dominate the market: Organ and Schmetz. Other relatively popular brands are Groz-Beckert and Klassé. Some yarn or machine manufacturers (e.g. Madeira) sell needles under their name, but do not manufacture them.

2 Anatomy of a Sewing and Embroidery Needle

According to Wikipedia, based on Lydia Morgan's "needle machine know-how", needles have the following structure (from top to bottom):

According to Wikipedia, the majority of sewing machine needles are made from various grades of hardened steel coated with nickel or chromium, although some special needles are coated with titanium nitride in addition to chromium. Titanium nitride is a gold-colored reflective ceramic material that reduces abrasion, allowing the needle to stay sharper and last much longer than other varieties.

The needle points (and its tips) come in several variations and are combined with other properties such as eye length and width, needle thickness or groove.

Visually, there doesn't seem to be a big visual difference between various small/light ball tips, i.e. between a universal sewing needle and a standard embroidery needly. They have a somewhat blunt tip, but both should normally slide between the threads to preserve the tissue.

Organ uses the following typology for its tips:

Organ manufactures a dozen of other cutting needles, the LR for example makes staggered cuts

The length of a needle is standardized. The needle size refers to its diameter, which is measured in 1/100 mm (NM code). This size is often accompanied by a Singer size number, mostly obsolete in Europe, more popular in the United States.

We measured about 34mm between the tip and the beginning of the eye (l1). Since the eyes can have different lengths, a needle size 60 measures about 3.8 cm and a needle size 90, about 3.96 cm.

When the thread size fits perfectly into the long groove, it creates the optimal conditions for the best stitch, tension and trouble-free sewing. If the thread is too thick, it may become blocked and the following problems will occur: thread pull-out, thread breakage, missed stitches, uneven tension, etc. When the thread is much thinner than the groove, it creates a situation where an excessive amount of thread can form in the groove, which can reduce the size of the loop, skipped stitches, uneven tension, etc.

The following design "tortures" the Lobster 2 Bold Italic font from InkStitch. Its design requires a minimum height, about 16mm. The correct use of this font is represented by the word "Stitch" outside the black patch. To test the "diameter" effect of the needle and thread, we will embroider the first two lines with a standard needle and thread and the next two with a thinner needle and a thinner thread. 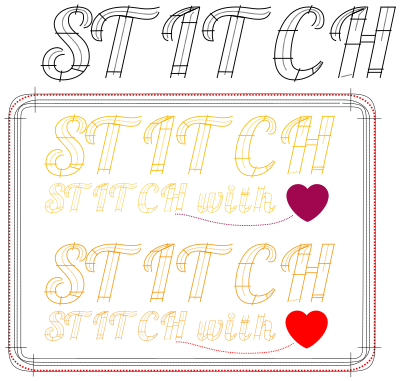 The following table shows the needles, threads and densities used. By enlarging the picture, it is clear that small writings come out better with a needle 60 and a thread 60.

Embroidery needles have a slightly larger eye compared to the standard needle. However, this difference is barely visible. The reason for using a significantly wider eye are threads that do not pass through properly, especially metallic and wider cotton threads.

To embroider with large cotton or acrylic thread we recommend using TopStitch needles. The long and wide eyes of the Schmetz 100/16 Topstitch needle are clearly visible in the next image. 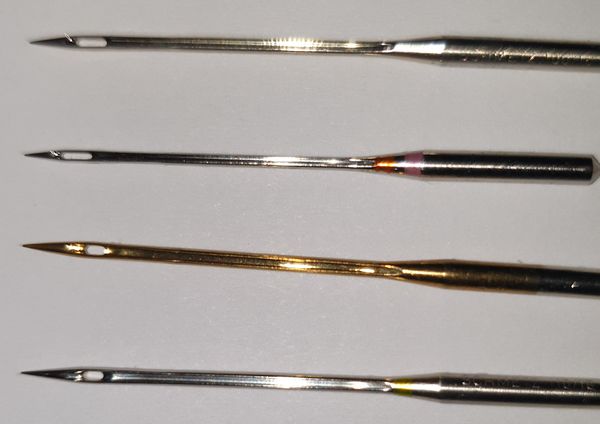 Among the manufacturers there are also slight differences in shape (as with all the rest of the needle).

Finally, there is a fundamental difference between the flat 130/705 needles (family and semi-professional) and the industrial round DBxK5 needles. In the following picture we see that a consumer/industrial Schmetz 90/14 H has a shorter eye than a small industrial/universal Organ 60/8 SES !

In principle, there are only two types of systems adopted by needle manufacturers:

Regarding the types of needles, needle manufacturers use according to Wikipedia (GER) a letter code that seems to be widespread. Some needles also adopt Schmetz color codes (one for needle type and one for its size), others have their own color code (check it out).

A needle is generally characterized by the following:

All the needles discussed in the table below have a groove, hence the H (hollow / Hohlnadel).

Let's go back to 130/705 flat shaft needles. The following image compares standard embroidery needles with jeans and stretch needles. We can see that the overall architecture is very similar. The only difference is a sharper tip and a stronger shaft that are difficult to see. The second image compares a stretch needle to an embroidery needle and we see that there is also little difference. The last image shows a Metallic needle by Bernina using a Schmetz coding.

7 Tips for choosing a needle 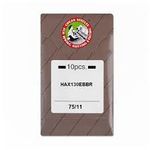 organ HAx1-EBBR for the Brother PR series, equivalent to 75/11 H-E

Most embroideries can be done with a normal embroidery needle (e.g. a 75/11 H-E) and a normal thread size 40. You can even use a so-called "universal" needle, but with slightly less good results for difficult threads. Some manufacturers such as Organ sell the same product in several forms (plastic tubs or small envelopes) and names (130/705 H vs. HAx1).

To help people to choose we give some examples and pictures of known brands. No preference, no comparisons were made, but we think it is wise to buy a quality product. We have had good experiences with Organ, Schmetz, Madeira, and Bernina. The brands of yarn or machine manufacturers are usually produced by a major brand and you also can buy these.

To obtain an optimal result, the yarn width, fabric type, and yarn type must be taken into account. Other criteria such as the type of embroidery can be added.

In machine embroidery, as a general rule, needles H-E or H between 70 and 90 are used. The Elna 8300 manual specifies that a 75/11 needle for fine fabrics and a 90/14 needle for medium to heavy fabrics should be used. The type of needle recommended by the Brother PR1050X manual is the specially made HAX 130 EBBR from Organ, available in sizes 65/9, 70/10, 75/11, 80/12 and 75/14. Schmetz System 130/705 H-E needles can be used as replacements. For a fast machine and "normal tissue", it is generally recommended to buy embroidery needles and not sewing universal needles. 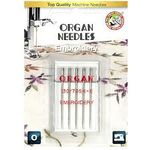 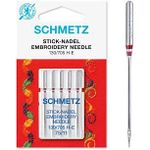 Most typical needle for embroidery ("family" machines and semi-professional machines like the Brother PR).

The most typical needle for industrial machines is a round needle, for example an Organ DBxK5 Round Schank, size 75/11. 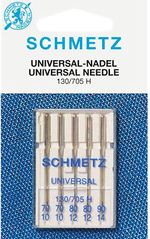 The most typical needle for sewing is a 130/705 75/11 H (also called HAx1 universal needle). It is slightly different from an embroidery needle: slightly narrower eye and groove, more pointed ball. These universal needles (Organ or Schmetz H) can be used for embroidery, in particular for denser materials, but some threads such as rayon or fine metallic seem to pass less well.

If you work a lot with self-adhesive stabilizers or glue, you can try: Organ Anti-Glue 75

7.2 Yarn diameter (for a normal fabric)

To embroider on special fabrics we choose to use specialized sewing needles, especially for embroidering on jeans or leather. 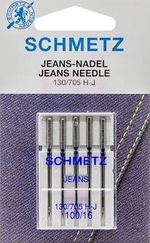 To embroider thick jeans or artificial leather, it is advisable to use a needle type H-J and at least one thickness between 90/14 and 110/18. These needles have a reinforced shaft and sharper point. 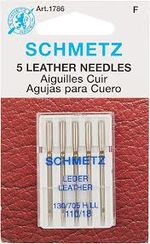 It seems that embroidery can tear fine leather and that stitching on thick leather is difficult. Hence the advice to embroider on medium thick leather, for example shoes, a strong jacket or a brief case. A leather needle is sharp and cutting. There are several variations. The most popular (H-LL) makes straight lines.

7.6 Embroidering on sweaters and other "stretch" materials

To embroider on stretch, sweaters, etc. normally use a needle with a rounder tip than an H-E embroidery needle.

Finally, there seems to be little difference from a standard embroidery needle, so these also work. For some patterns on large sweaters, we also can choose the opposite: a sharp needle to preserve the geometry of the fabric, but it will cut through the wool. 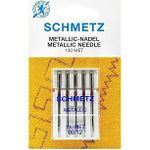 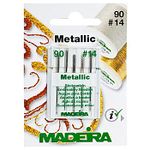 When embroidering with metallic thread, it is best to choose a needle with a longer and wider eye. These H-MET needles are sold under the name "Metallic", "Metal", "Metafil" etc. This said, if the thread does not contain too many fragments you can also use a normal embroidery needle 75/11 H-E or SES or maybe a little wider one (80/12 or 90/14).

Settings (to be adjusted for each type of metal needle):

For thread type POLYSTAR by Gunold (about size 30), a H-MET needle size 80/12 (tested below) is recommended. According to Gunold, a universal needle (Organ 75/11 SES, not tested) could also be used, but we do not recommend it. Below is a test:

To re-test: Results with lower density and results with a universal sewing needle.

Thread examples (to be confirmed)

For almost all metallic threads, it is advisable to lower the speed a little and reduce the tension, especially if you are embroidering with a universal needle. 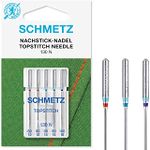 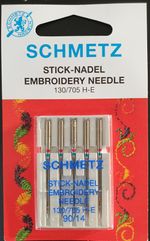 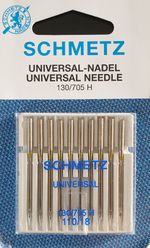 Usually we recommend starting to learn embroidery with a polyester or viscose yarn (faux satin made from cotton) or a mixture of both. However, it is possible to create embroideries that look more like handmade embroideries with coton or acrylic wool. Some threads can be brushed to create a "fluffy" effect.

Be careful with bobbin threads, e.g. Filaine and Cotty, Gunold suggests Bobby Syn 100 or or Bobby FIL 120 L. However, you should also check the instructions of your machine manufacturer. For example, Brother insists on using Bobby Thread 110 (with its cardboard) for the PR1050X or similar. Basically, all you need is your standard Polyester 60 (or thereabouts) thread.