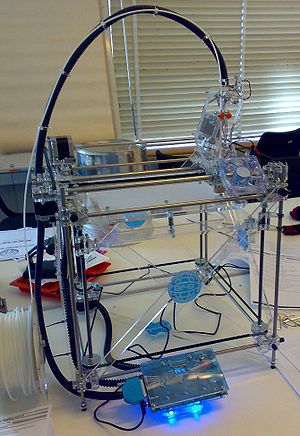 RapMan was one of the first commercial kits of the RepRap 3D printer sold from 2009. RepRap is short for Replicating Rapid-prototyper since it was developed in a research project on self-replicating machines. TECFA bought its kit in november 2009 and we assembled it in the end of January 2010 (File:Invoice490DanielSchneider.pdf) As of 2019, it is displayed as museum piece in our location at Uni Pignon, Geneva.

This 3D printer builds the parts up in layers of plastic with the help of a custom-made Thermoplast Extruder. The machine takes a 3mm diameter filament of a polymer, forces it down a heated barrel, and then extrudes it as a melt out of a fine nozzle. The resulting thin stream is laid down in layers to form the parts that RepRap makes. The extruder should work up to a temperature of 260 degrees Celsius. It works with various polymers like ABS (Lego-like plastic) and polylactic acid. The extruder can move left/right (X axis) and forward/backward (Y axis) The printed object sits on a platform that will move down (Z axis)

Printing instructions are written in a language called G-code. A user will copy a g-code file to an SD card. This card is then inserted into a slot of the RapMan board for printing.

Assembly of V3.1 RapMan takes at least three full days. It can be done by any person who has good reading skills, patience and some "gift" for assembly. Bits from Bytes did produce a mostly very good set of documentation.

It is very important to understand what you are going to build. E.g. it's a good idea to look at a video like thisfilm made for BECTA.

You also should understand more or less the following picture: 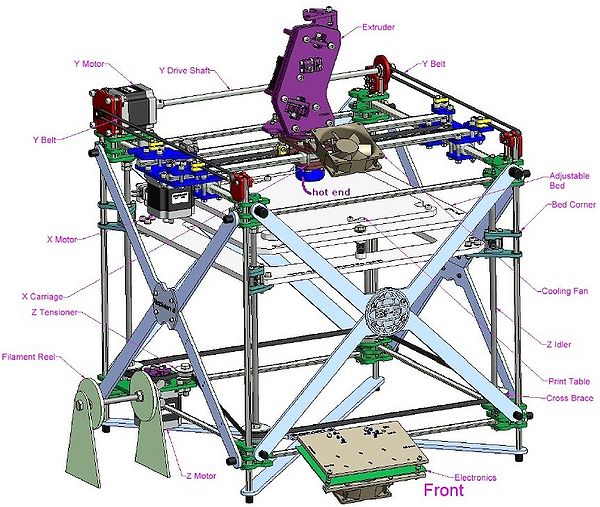 Further reading: Our Assembling the RapMan V3.1 3D printer provides a more detailed overview of the assembly procedure. In addition, you may consult both the Bits from Bytes "build" forum and the BFB wiki.

If you managed to assemble you RapMan in a correct way, printing simple objects is fairly easy:

See the First steps with the RapMan V3.1 3D printer. It attempts to explain all the basics.

There are three situations:

To model, there are several options:

Meshes (different objects) may be combined / merged. You can do this with the free Netfabb Studio and Meshlab programs. Creation of simple mashups with Netfabb and Meshlab is explained in the Meshlab for RapMan tutorial article.

An easier solution is to acquire the Netfabb Professional. It can export several objects (originally from *.STL files and other sources) as a single .STL file.

In most cases, your 3D general purpose modeling or CAD program can't directly produce g-code. You first must export the model to .STL (or another format like *.PlY).

You then may need to fix your .STL model, i.e. first make sure it has the right size and the right position. But there may be more tricky issues, like repairing "holes" (use Netfabb for this)

The coordinate system of the RapMan puts the origin in the middle. To manipulate size and coordinates, there are some options:

Then produce the g-code, e.g. with Skeinforge or with Netfabb basic.

Build an easy model with an easy 3D modeler

6 A last word of advice 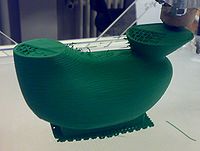 Duck printing is not very hard

Explore other RapMan-related articles in the category RapMan. You may follow the order suggested in the wiki book.

For 3D printing you then need specific tools to repair STL files and to generate the g-code:

netfabb (an integrated software tailored for additive fabrication, rapid prototyping and 3D printing)
Official netfabb website
can resize, position and repair STL.
A base version (netfabb Studio) is free, Netfabb professional is 700 Euros (plus VAT), educational pricing is available on demand.
A commercial reprap plugin can generate g-code. I.e. this is an alternative to skeinforge.

SolidView light (not needed)
SolidView light is a free program with support for SFX, STL, SolidWorks, VRML, and OBJ CAD files. I.e. it can be used to look at STL files.

Pleasant3D (not needed)
Pleasant3D Visualization of STL plus minor editing in order to be printable on MakerBots/Rapmans: Move, rotate, resize.

Meshlab (not needed, to convert files to .STL and to merge .STL files)
MeshLab
See Meshlab for RapMan tutorial. Meshlab is the open source, portable, and extensible system for the processing and editing of unstructured 3D triangular meshes.

If you like your prototype and want it printed more professionally. Several kinds of materials, including metal...

This article is also available under the following copyright: Contents of this page (including pictures) are also available under GNU General Public licence and Creative commons Attribution-Share Alike 3.0. E.g. companies that sells RepRap kits can take the contents ...
Retrieved from "https://edutechwiki.unige.ch/mediawiki/index.php?title=RapMan&oldid=71097"
Categories: