According to Wikipedia, “G-Code, or preparatory code or function, are functions in the Numerical control programming language. The G-codes are the codes that position the tool and do the actual work, as opposed to M-codes, that manages the machine; T for tool-related codes. S and F are tool-Speed and tool-Feed, and finally D-codes for tool compensation.”

This is a g-code page for the RapMan printer.

List of RapMan G-code (thanks to Bits from Bytes blog: RapMan special codes

Printing stopped at line 299941 after 3 days of printing. I mean I had the printer on hold sometimes (ESC), but it was a 24 job. Anyhow, big low down, but I decided that I must recover from this without super glue, i.e. leave the object on the print bed and restart.

If you don't know where it crashed, e.g. if the board did reset: Run skeinforge again but make a change in the Analyze->Skeinview tool:

Now if you were printing a tall object, the problem is that the rapman always expects to be able to home in order to find x,y,z = 0. If you have a "real" print it can't, since raising the print bed will destroy a 14cm high print for example. 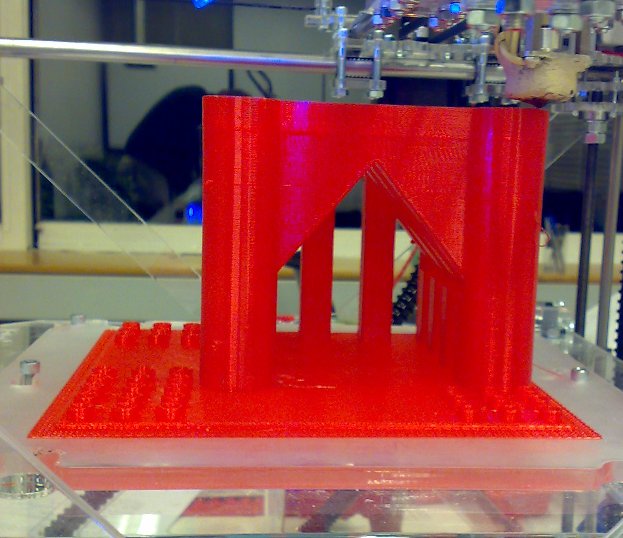 I tried all sorts of things fiddling with G90 and G92 codes, but did not mange to restart g-code where the printer left.

So I came up with a typical bricoleur solution :(

Here are the two steps:

Normally, you should write a script (argl for stupid end-user programmers) that replaces all the Z values. E.g. Z142.2 should become 0 or 0.2. In my case I was lucky since I just print vertically. So I decided to restart at 14cm and not 14.2cm (makes it higher, but that's fine).

GCode where it stopped:

So I went to start of the 140mm series and killed all the lines from beginning to there. Then I used three Regexps with a text editor (emacs) to change:

Then of course, the g-code must have a header. Resulting g-code start:

If your object is flat, you can stop here, else read on ....

a) Move the print head next to a top level point NEXT to home. Path toward -X (left) must be unobstructed. Then align it, i.e. make it touch the top.

b) Move it to the left a bit, and switch off.

c) Switch on. Then position the print head about 1mm below the point where you want to restart. This can be a bit less or more. You can see how much you go down on the control panel. I.e. press the Z+ button and move the print board up.

e) Hold you finger on the Z switch (grey box which is usually touched by the long 6cm bolt. Run the file and release after 1-2 seconds, i.e. the print bed should move down again by 1mm.

f) Now the printer will move to Xmax/Ymin. If it barely scratches the print when it moves you are fine. If it is too high or too low, then repeat from (c). Took me about 4 attempts to get this right.

I REALLY think that rapman firmware should include a control code to recover more easily e.g. Some g-code that says:

I did manage to print this stronghold, see the Doblo factory article.