This article has two functions:

Boxes from RapMan delivered on Jan 2010

Bad base bed hole in the Rapman kit 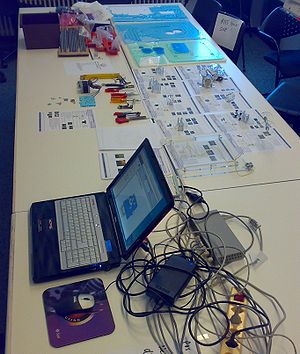 When we ordered a RepRap it came in a fairly small plastic-wrapped cardboard box. In addition, we got some boxes with polymer filaments (10 ABS rolls and 4 PLA rolls). To the left is a picture.

You may check the insides of the boxes. E.g. compare contents to the list that you can find in each of the three following manuals, i.e. in the "included" section in the beginning.

Finally, there may be faulty pieces. In our case the holes in the base bed (page 51 of the build manual) were not straight. Other folks in the forum reported this problem. IMHO ours were sort of straight enough. The setup, i.e. a bolt with a spring that ties down the print bed is used to micro-adjust the level of the print bed in 3 dimensions (see the operations manual).

Assembly is easier if you can reserve a lot of space for assembly. At TECFA, we used our seminar room and took about 2 x 6 meters :). See picture to the right.

Keep the following picture from the build manual in mind. This is what you are going to build. The most important parts are labeled (we added the hot end, i.e. part of the extruder that will heat the plastic filament). 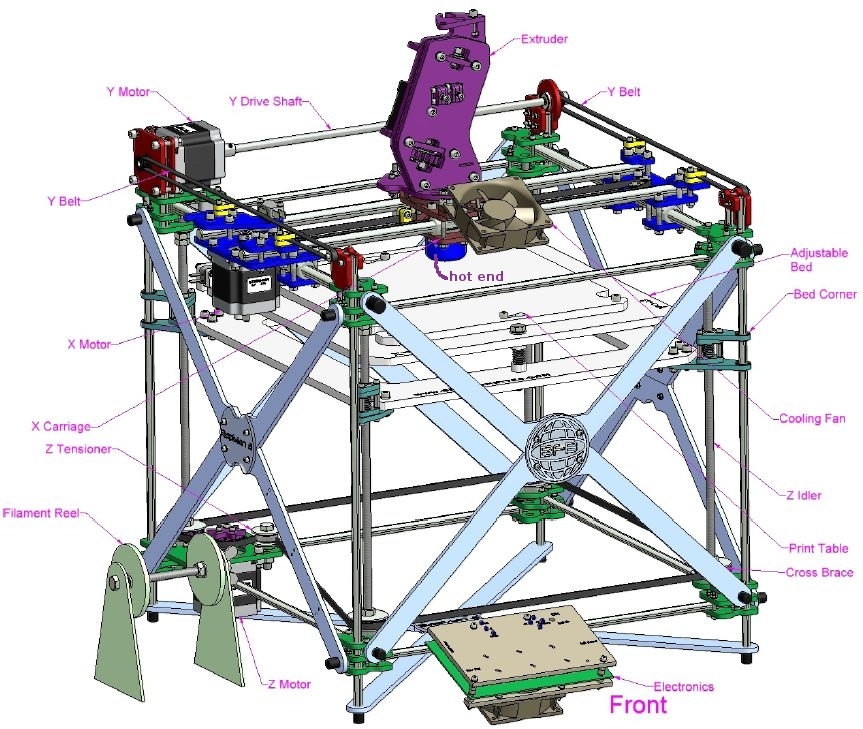 You also should look a real picture, below is ours: 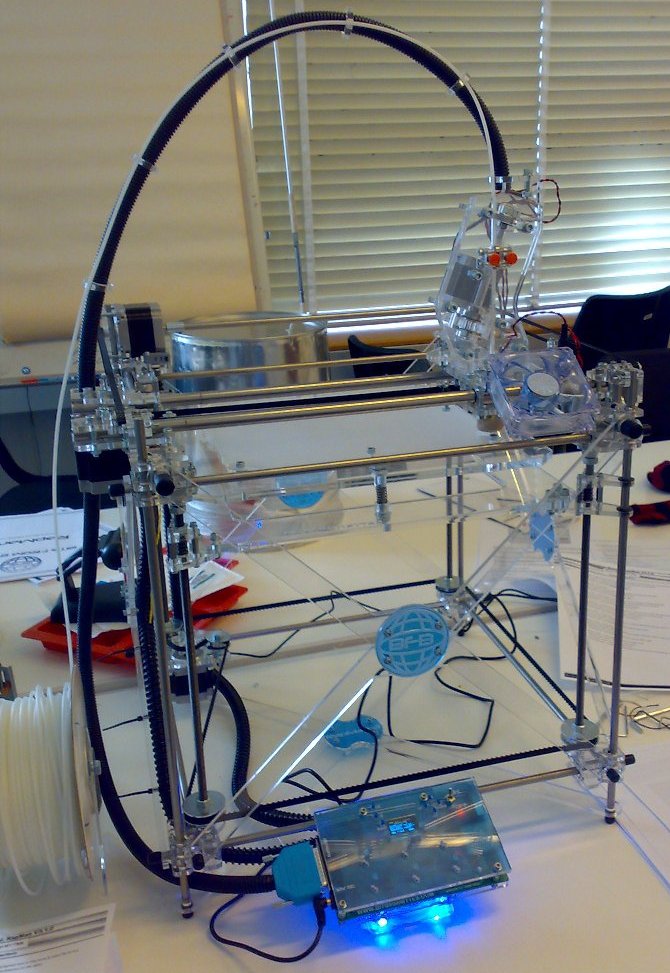 2.2 Overview of the manuals

All manuals are available at Bits from Bytes. At the time of writing (feb 2010) they could be found in the downloads section. The "build info" section includes outdated version. So, in any case, always make sure that you get the manuals for the version you ordered, e.g. RapMan 3.1. Here is a list of the manuals:

Notice: In some case, the newer manual versions did not have enough information to understand the process. We had to look at some 3.0 version manuals where procedures are explained in more detail. However, this information needed to be adapted, because some parts are not the same and generally speaking 3.1 is easier, in particular assembling the hot end !

As of Feb 2010, the build manual is quite superb (with little mistakes), the Extruder manual is ok enough, since at this stage you can build without reading .... The Hot end manual is not good enough (yet).

You will need tools. All except two can be easily found in a do-it-yourself store. Read: V3Info.pdf (this file may not sit next to the build manual). Dictionary (terms are in UK English): 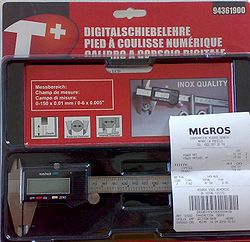 (3) Extra tools (not mentioned in the bills of tools)

(1) You will learn how much you can tighten the screws. The golden rule is simple: really finger tight then add 1/2 turn with a key.

(2) Terminology: Although we do understand English, we didn't know about these:

Also remember to look at the "big picture" on top for terminology of the rapman parts.

(3) Learn how to read the manual. You quickly will learn about the names of nuts and bolts:

The cartesian robot is fairly easy to build if you understand English and are used to reading computer manuals for example. It takes about 2-3 full days (2 persons working on it).

Things that will go wrong:

Sometimes you need to inserts bolts in the plexiglass parts. If you can't insert these, don't force too much, but use a needle file to clean the aperture or even to enlarge it. This is why we recommend to get a whole set of small needle files in various shapes.

3.3 The extruder and hot end

The extruder and the hot end are described in different manuals plus in the videos PDF. As said before, we rather recommend buying a pre-assembled version.

The Extruder manual explains how to assemble the mechanical parts of the Extruder. This part is fairly easy.

The hot end manual is not clear enough: 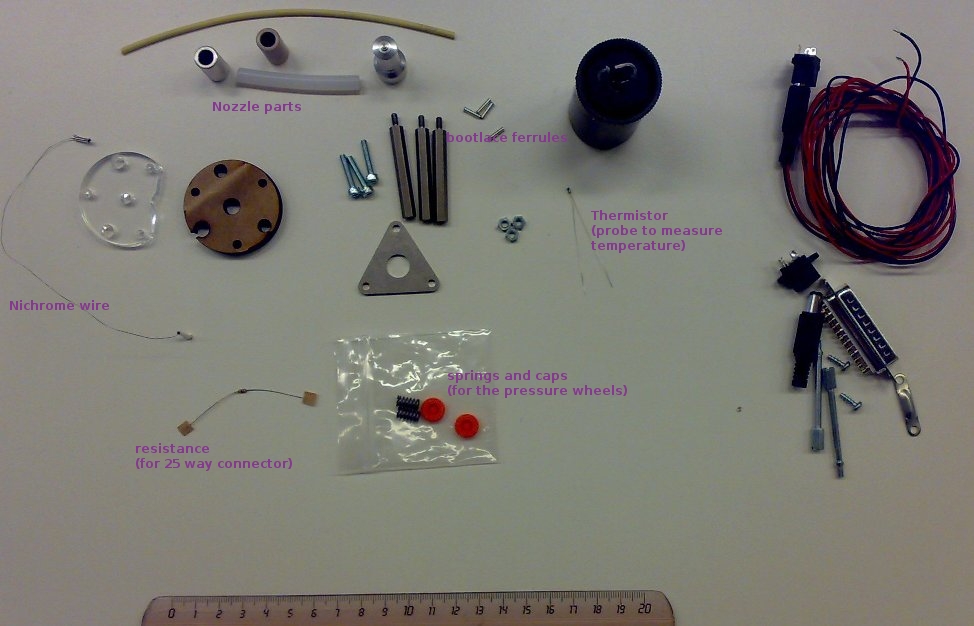 Hot end + some other intriguing parts

Here is what we did:

Since we didn't have a good enough multimeter, we didn't test anything after it. If we made it wrong, we'd have to order a new hot end kit anyhow ...

Below is picture of the hot end, printing a giant duck: 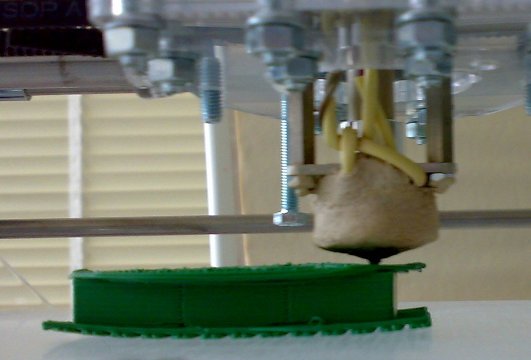 There are three levels of tuning

(7) SD card memory errors: Format the card before you use it. You may have to repeat this if errors pop up again.

Rough alignment of the print bed:

Copy the Control Interface page of the operation manual and over-line the important manual move mode commands, i.e. you should keep this page near the control until you know commands by heart.

Then, power up, and move the print head around in all three axis. If a motor won't work, check wirings. If you hear strange noises, check alignments and belt tension.

Adjust the print bed with bolts. This is a bit tricky and needs several iterations. In each position, the nozzle should be about 0.5 mm away from the print bed. We used five sheets of 70mg paper (500 sheets = 5cm) to do this.

Go slowly when you move the print head. Don't damage the board !

The 0/0 coordinates are in the center.

How does Rapman know where the print head is ?

4.3 Inserting the filament and manual extruding

Make sure that you rough up the print bed with sand paper. Remove the dust, e.g. you can easily remove the print bed, sand it, then wash it. The principle is that the filament has to stick.

The nozzle, when cold, takes some time to heat. Don't worry if nothing happens during a few minutes. At some point you will see the temperature going up. Also you should know, that temperature drops pretty fast which is a problem with the test files. E.g. if you print without manually extruding some plastic beforehand, things go wrong.

Then, as soon as the bolt in the extruder starts turning (temperature reached):

Then, as quickly as you can, run a print file (see below)

Before you can insert new plastic:

Insert the filament as explained above 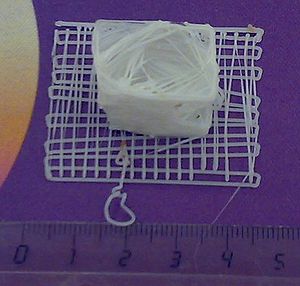 Don't panic, the second print should be much better

(1) Upgrade the firmware as explained in the operations manual. To do so you need:

(2) Then print the test raft pattern.

(3) Repair the TestRa.bfb file to make it fit your situation. Most likely temperatures are too low (see G-code below). Your first print will go miserably wrong, unless you are either very good or very lucky.

You also may adjust the belts and other geometry. Our very first cup (see aside) went horrible wrong since we took off a Y belt and the forget to re-adjust as we already explained.