Some people may argue that these systems are not just games (i.e. they are virtual habitats). That is true, but they do contain games or "gaming" features.

(there are many others !)

There is some potential in using its technology. Examples:

Hung et al. (2009) [1] studied motivational factors in educational MMORPG. The conclude that “four factors motivated students to play the game provided, and allow extension to other educational MMORPGs: achievement (desire for competition with a standard of excellence), social (collaboration with others and building social networks), immersion, and the completeness of instructional mechanisms.” According to the authors, research also suggest that MMORPGs could develop various higher-order thinking skills, such as creativity, problem solving, communication skills, and meta-cognition: “Beedle and Wright (2007) indicate that playing MMORPGs can inspire creativity, motivation, problem solving skills, and communi-cation skills [6]. Dickey (2007) also argues that playing MMORPGs can foster learn-ing while requiring players to think, plan, and act critically and strategically [7]. He further indicated that different types of quests in MMORPGs could facilitate different knowledge domains (e.g. declarative knowledge, procedural knowledge, strategic knowledge, and metacognitive knowledge).”

The earliest multi-user virtual worlds for language learning were based on rather text-based environments such as MOOs, e.g. Lee et al. (2005) [2].

Suh et al. (2010) [3] investigated the effectiveness of MMORPG)‐based instruction in elementary English education compared to more traditional classroom education. 118 students of a treatment group were taught with an English MMORPG, and 102 students in a equivalent control group were taught in a face-to-face classroom using multimedia courseware and a textbook. “Univariate ANOVA results [..] show that for the post-test the differences in the mean scores between groups were significant in all the subcategories of listening, reading and writing, but not speaking. The statistical evidence indicates that the MMORPG group (treatment group) outperformed the traditional class- room group (control group) in the post-test.”

In addition to a "MMORPG" effect, the authors tested a modle with nine independant variables: gender, prior knowledge, motivation for learning, self-directed learning skill, computer skill, game skill , computer capacity, networkspeed , and computer accessibility. “A survey and five tests (i.e. English learning achievement test, motivation test, self-directed skill test, computer use ability test, and game skill test) were conducted to compare students’ achievement.” (p. 375). The overall model of nine variables predicted 47% of the variance in English learning achievement, in particular prior knowledge, motivation for learning, and network speed had significant effects. This means that a well designed environment must take into account speed and that the motivational impact of playing a MMORP also could play a role.

Hou (2013) [4] studied behavioral processes and learning performance in Talking Island, a (now extinct) MMORPG designed to teach elementary school students English vocabulary and speaking while allowing for other activities, e.g. battles. The findings of this study indicate that an MMORPG that combines scenarios, problem‐solving tasks and practice tasks can indeed facilitate students’ learning to a certain degree (approximately 70%) instead of just providing entertainment. 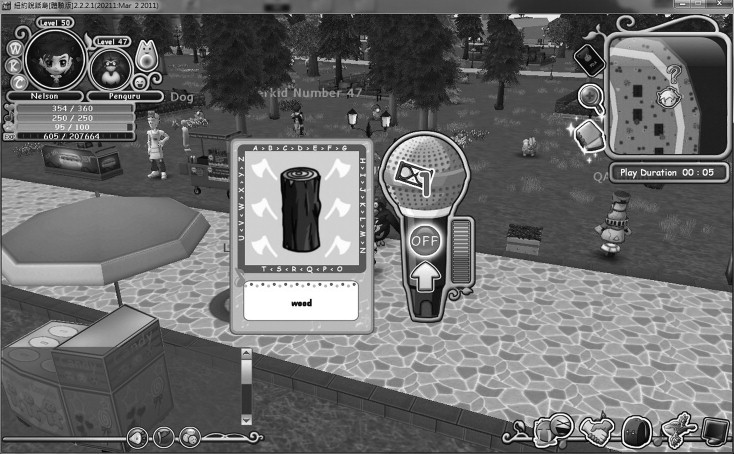 In a prior, related study, Hou (2012) [5] conducted a long-term analysis of the behavioral patterns exhibited by gamers playing an educational MMORPG, i.e. 100 learners over a period of 335 days. “Using frequency analysis, sequential analysis of behaviors and cluster analysis, [he] examined our research questions and determined the gamers’ behavioral patterns, gender differences, and the potential and limitations of the MMORPG as an educational tool.”. Ten different gaming behaviors were coded and some combinations of these played a more important role for learning. The author found that “learning behaviors primarily emerged in battles, rather than situated problem-solving quests” but identified a variety of learning-related behavior sequences including flash card practice as a result of using items (TS→TL, TL→LT), flash card practice as a result of configuring pets and participating in battles (PT→FT, FT→TF), and collaborative discussions and learning as a result of teaming up to solve problems (GP→TK).

GP = Group-work - Operations of gamers teaming up with each other.
LT = Learning in tasks - The flash card practice that comes with a quest or an item taken on by a gamer.
PT = Pets - Gamers’ operations in configuring and utilizing the virtual pets.
TK = Talk - Gamers using communication tools to interact with others or the behavior of co-op learning and discussions.
TL = Tools/Item - Gamers’ operations in configuring and using various items/tools.
TS = Conducting tasks - Operations of gamers’ problem-solving tasks in different situations.

In other survey-based study [6] found that “This kind of digital game-based learning environment can reduce the learners speaking anxiety in target language, and enhance their motivation and confidence.”

We don't know if there exist any specific operational systems that one could use to create educational many-user games.

Since 3D interactive environments are scriptable to some extent, they also could be used to implement games. This page lists some technologies.

Riegle, R.P., Matejka, W.A. (2006) The Learning Guild: MMORPGs as Educational Environments. In: 22nd Annual Conference on Distance Teaching and Learning, the Board of Regents of the University of Wisconsin System