Creativity, according to Edith Ackermann (2009), can be divided into three different kinds:

Creativity is a more complex issue. It sometimes has been linked to "Optimal experience" which enhances productivity but does not necessarily entail creativity. According to Feldman (1994), creativity should be studied and therefore facilitated by the teacher at three different levels:

The table below inspired by Feldman (1994) lists some important variables that could be beneficial for creativity.

According to Ackermann (2009:6), the creative process is at once iterative and convergent. Creators move through five phases, that have been defined as: as:

Ackermann (2009:7) further argues that aystems have been proven to be essential for creativity, since they channel creativity into ideas or artifacs in a way that they can be understood and valued by ourselves as well as others. In addition, they channel creativity into specific problems (e.g. an engineering puzzle). The idea that systems “allow us to build knowledge, as well as express it, become crucial not only for learning, but also for creativity” is a clearly constructionist stance.

4 Creativity in a Vygotsky perspective

By Alain Senteni, University of Mauritius

The role of creativity in human activity has been discussed by Thikomirov (1999) who encourages a differentiation between routine and creative activity. Thikomirov proposes a "theory of creative activity", emphasizing the functions of construction, generation and creation, as opposed to comparison, reproduction, assimilation and copying, at the root of any routine activity. While motives, goals and operations form part of all kinds of activity, creative activity generates new goals, new motives and new operations, that is functional development in the course of the realization of the activity. Generation of new goals in the subject's activity is central in his theory that defines "the image of the future results indirectly connected with the motive" (Thikomirov, 1999, p. 351)

The theory of creative activity developed by Thikomirov relies on Vygotsky's work on the development and use of creativity, focusing directly on the development of creative ability. This work is summarized by Smolucha (1992) who asserts that creative imagination is a goal-directed, culturally mediated psychological system that emerges from the internalization of children's play and the functional interweaving of fantasy and thinking in concepts. The importance given to creative ability is increasing with the emergence of knowledge communities and societies, whose new way of looking at value creation depends on their ability to create wealth by fostering innovation, creativity and entrepreneurship. Answers to these challenges for developing leadership, communication, innovation and collaboration are not found in the cartesian rational, logical, and scientific :

In today's information, technological and innovation driven society, creativity has become more of a necessity for psychological health and life success. It can no longer be viewed as a luxury or marginal to "the good life"; it is essential to society's ability to develop and work under conditions of fast-paced change. Societies have become more global and people must learn to interact with a diversity of others.

Schools and other social institutions are having difficulty effectively educating and training people for a future that is ambiguous: how can teachers and leaders prepare children and workers for what they themselves cannot foresee? Vygotsky's notions of meaning-making, creativity development and the complementary development of cultures and individuals provide foundations for dealing with these growing issues.

Vygotsky's dialectical and synthesizing methods become viable models for development and action. Creativity and development are both objective and subjective processes, involving not only shared, public meanings and objects, but also personal experiences and transformations. (John-Steiner & Moran, 2002)

Although human activity is creative by nature, its ability to exceed and transcend given constraints and instructions is not encouraged in traditional teaching and learning systems. The difficulties encountered by schools and other social institutions for effectively educating and training people for an ambiguous future, are particularly visible in developing countries (e.g. Mauritius) where spoon-feeding teaching principles, often inherited from colonial times, aim rather at preparing children for obedience, routine work and harsh competition, than for collaborative and creative work.

Creativity is a very complex issue and its relation to flow is not obvious. « Optimal experience » has been described by gamers or programmers and it enhances without doubt productivity, but does not necessarily entail creativity. According to Feldman, Csikszentmihalyi and Gardner (1994), creativity should be studied and therefore facilitated by the teacher at three different levels : (1) the social field, e.g. a network of people who provide cognitive and affective support, instruction, evaluation, recognition, etc. ; (2) the domain (symbol systems of knowledge) ; and (3) the individual, i.e. intellectual traits, personal traits and cognitive structures. It is clear that education cannot influence all variables, but pedagogical design certainly can have a positive influence on individual dispositions that already exist. It can act upon conditions, i.e. on educational tasks and the general learning environment like the « class spirit » with the help of specially designed technology that we will introduce later on. By exposing students to open-ended, challenging, authentic and partly self-defined projects on one hand and by providing scaffolding and support on the other hand, the teacher does create situations where individual traits can be exposed and developed.

The CSI is similar to the NASA Task Load Index Survey but is designed specifically for evaluating creativity support tools, based on concepts and theories from creativity research. (Caroll & Latulipe, 2009)

This index is based on two parts: A short questionnaire measuring several creativity dimensions In a second part, “each factor will be compared against the other five, to assess the relative importance of these factors to the participant for the particular activity under study” (Caroll & Latulipe, 2009: 4013) 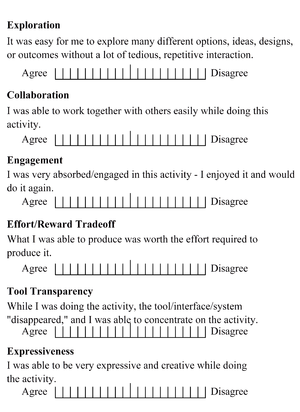 “To calculate the creativity support index, multiply each factor ranking from the first part of the survey (which is out of 20) by the count for that factor in the second part the survey and sum these together. Then, divide that sum by 3 to arrive at an index out of 100.” (Caroll & Latulipe, 2009: 4014)