This page needs to be updated for Flash CS6, but principles remain the same ...

“Adobe Flash (previously called Macromedia Flash) is a multimedia platform originally acquired by Macromedia and currently developed and distributed by Adobe Systems. Since its introduction in 1996, Flash has become a popular method for adding animation and interactivity to web pages. Flash is commonly used to create animation, advertisements, and various web page components, to integrate video into web pages, and more recently, to develop rich Internet applications. Flash can manipulate vector and raster graphics and supports bidirectional streaming of audio and video. It contains a scripting language called ActionScript. Several software products, systems, and devices are able to create or display Flash content, including Adobe Flash Player, which is available free for most common web browsers, some mobile phones and for other electronic devices (using Flash Lite).” (Wikipedia, retrieved May 23 2009).

In addition, Flash is used as a format for desktop applications under the name of "Adobe Integrated Runtime" (Adobe AIR).

We could distinguish four kinds of Flash authors: (a) People who use simple offline or online tools to generate applications like slide shows. (b) Multi-media authors who create good looking Flash movies. (c) Multi-media / light-weight programmers who create interactive Flash applications and (d) "Real programmers" who write so-called rich internet applications. Today, many tools can produce runnable Flash contents. However, only Adobe's commercial Flash authoring tools allow non-programmers to exploit the full capabilities of this format. Programmers, on the other hand, may use Adobe's free Flex software development kit instead of the commercial Flex builder.

This page contains an overview of Flash-related articles in EduTechWiki, some general definitions, as well as links to software. References to tutorials, documentation and other websites are available on different pages.

Most tutorials have been upgraded to CS6 in winter 2013. CS4 and CS5 users can read CS6 tutorials, but should take files from tutorials developed for CS3 and CS4. The interface changes between CS3 and CS4/CS5/CS6 are substantial but not major. The differences between CS4, CS5 and CS6 are rather minor.

We produced three families of tutorials with some overlaps:

All materials (*.fla, *.swf, etc.) are available at http://tecfa.unige.ch/guides/flash/ under a CC BY-NC-SA licence.

Other Flash articles in EduTech Wiki (e.g. overviews and cheat-sheets)

In the past, Flash was just a web animation/interactive multimedia technology. Today (2008) Flash is a serious contender for one-stop rich internet application technology as the following picture shows: 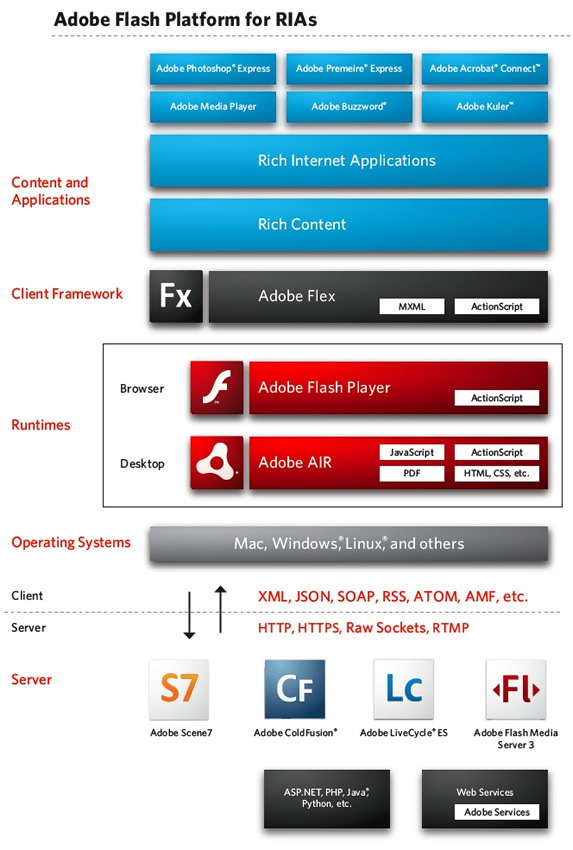 CS3 was a major break from earlier versions (Flash 8 and earlier) with respect to ActionScript. ActionScript 3 is much more difficult to learn than ActionScript since it uses a modern typical user interface paradigm. In Flash 8 one could directly attach scripts to objects. In Flash 9 and later scripts are attached to frames.

Since CS5, Flash includes code snippets. Therefore, these newer versions are better suited for teaching Flash to beginners. However, for learning modern Flash, it doesn't make a big difference whether you use CS3, CS4 or CS5 or CS6. Some schools simply can't afford upgrading at an 18 month rate ...

See also multimedia authoring systems and computer games. Some of these have their own format, some can export to more common formats.

6 Links for software and media elements

A decompiler can translate an *.swf to *.fla. Useful if you want to learn (not steal) from examples on the web or if you lost by mistake your *.fla sources.

There is an increasing variety of tools and for a wide range of people, covering casual users to programmers.

In addition, you also should know that you can import several vector graphics formats. e.g. Windows Metafile formats into Flash CS3 (speeds up drawing).

6.10 Media for building your own scenes