This is a short screen capture tutorial. It assumes that you have some basic understanding about imaging software and graphics file formats.

Motivation to write this was twofold. I got intrigued by the fact that on Windows I was unable to capture correctly an Adobe CS3 application, I wanted to test free programs to capture user interactions (i.e. make screencasts), and finally think a bit harder on how to post-treat screenshots. Right now, this tutorial is probably not suitable for total beginners - Daniel K. Schneider 20:18, 30 July 2007 (MEST).

“A screenshot, screen capture, or screen dump is an image taken by the computer to record the visible items displayed on the monitor or another visual output device. Usually this is a digital image taken by the host operating system or software running on the computer device, but it can also be a capture made by a camera or a device intercepting the video output of the computer.” (Wikipedia, retrieved 20:18, 30 July 2007 (MEST)).

One may make a distinction between:

Screenshots
Outputting the entire screen or a part of it in a common bitmap image format such as BMP, PNG, or JPEG.
Screen dump
The display system dumps what it is using internally upon request. Output may be rendered in a different format, e.g. PNG instead of X or Display Postscript.
Video captures
See screencast for details. Capture the screen over an extended period of time to form a video file.

Since your screendumps may wind up in a wiki or presentation slides, i.e. in low resolution environments, you have to minimize the area you want to capture: 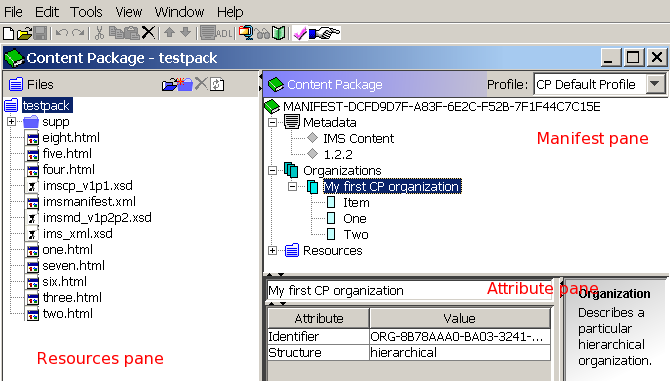 There are several kinds of tools:

There are about 4 different kinds of captures you can make:

To capture a screen there are usually three methods:

2.3 Capturing with a screen capture tool

These tools are quite self-explaining :)

You just have to find out how to tell it what you want to capture (whole desktop, window, area, etc.) and then how to save the result.

Also, each of these tools (usually per default) will disappear when you launch the capture. Some allow you to define hotkeys for various operations, but usually you don't need these.

2.4 Capturing with the Print Screen method

"Print Screen" means to make a copy of the desktop or a section through the Operating system (OS).

You can either capture the whole desktop or the active window:

These operations will put the screenshot into the clipboard. Therefore after pressing the key you won't see anything, but you then can simply paste the acquired bitmap into an imaging program with either one of the two following methods:

The print screen method seems to produce best results, since it seems to have less problems capturing some tricky multi-paned windows like the Adobe CS3 desktops for which none of my screen capture tools didn't work (some tabs did not show).

Screenshots of games and media players may still fail, resulting in a blank rectangle. According to Wikipedia, the reason for this is that the graphics are bypassing the normal screen and going to a high-speed graphics processor. Workaround: Open Display Properties -> Parameters -> Advanced, Click the Troubleshoot Tab, and Move the Hardware Acceleration Slider to "None" (Don't forget to put it back).

You can either capture the whole desktop or an active window

This tool will produce *.png image and a preview/popup menu will allow to save it somewhere. Btw this applications is also available under Applications->Accessories->Take Screenshot.

These images are saved to the desktop, but if you hold down the control key with the rest of the keyboard shortcut, the pictures are copied to the clipboard instead. (Wikipedia, not tested).

2.5 Getting the mouse pointer with Autohotkey (Win XP)

With most (free) programs you don't get the mouse pointer included and you have to search around a bit for a program. The only good solution I found was autohotkey and capture script written by Sean. It does work to my entire satisfaction, but to install this you need some technical reading skills (Autohotkey has a good help). E.g. I use this for my Flash tutorials.

Step 3 - Edit this script, you may rename it e.g. to catch.ahk

To capture windows or the whole screen into the clipboard, make the following changes:

by all these lines:

This will do the following:

Of course, you can change that, but you need to read the help..

means. There are other options ....

An alternative solution you can use is to paste a bitmap image of a cursor on top of the drawing. Since you probably also crop and resize the image, this is not too much trouble. However the cursor will not exactly look the same. On the other hand you can place more than one cursor over the picture, and make it bigger to make sure that people will see it. Of course, this solution is useless when you want to demo different cursors like the dozens you get with Adobe Flash.

Here is png cursor you can use:

, but it's better idea to grab the original SVG version from Openclipart computer/icons/flat-theme/action.

(Disclaimer: I am not much of an image expert).

Frequently, screen capturing programs save per default in the lossless PNG format. PNG is efficient for graphics, but heavy if the caputred area includes bitmaps. You may set PNG to a maximal compression rate (9), but the difference gained may not be very important. A PNG image can be 5-10 times as big as a JPEG image.

Screendumps that include bitmaps (include things like desktop background)

If you save screendumps that contain bitmaps, you should save in JPEG format (*.jpg). A lossful compression quality of 70 should be ok.

Here is a 700px-wide thumbnail of Daniel K. Schneider's desktop I made when I started writing this article. Click on it to get a bigger version:

Here are the sizes of some bitmap files I made for my desktop and that should be self-explaining:

Reduced versions (you can inspect the 1760x600 jpg version I used above). As you can see the quality of this imported 181K file is just barely good enough for reading text.

Screendumps that include text, graphics and a little bitmap. 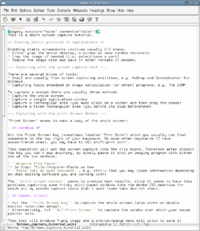 PNG Screendump of a text application

If an applications only contains text, PNG produces much better results than JPEG, even if compressed at quality of 70%. E.g. here is comparison from taking a picture of a text editor I use to write my EduTech Wiki articles:

For applications that contain text plus a little bit of bitmaps, PNG is also better. E.g. here is comparison for a screendump I used in the Flash CS3 desktop tutorial.

Images that are not essential for the understanding of a text, should be served as thumbnails. E.g.

Annotations with overlay text and graphics

There are two basic layout techniques:

There are probably three technical solutions:

Make an interactive program, i.e. the user can click on certain areas and then the application will show extra information. To make this understandable (affordable), you may have to draw boxes on top of the screenshot. There are several technologies, e.g.

For simple batch processing like rotating or clipping a series of pictures, we recommend IrfanView. It is best to define a different output directory and to keep the originals. 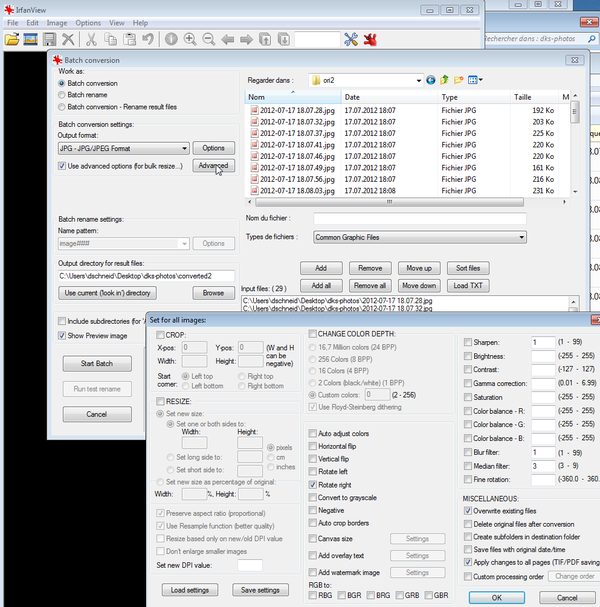