Activity modeling means to describe sequencing and conditions of actions. Such descriptions commonly are control flow and object flow models.

“The starting point of the diagram is the initial node, and the activity final node is the ending. An activity diagram can have zero or more activity final nodes. In between activities are represented by rounded rectangles.” (Wikipedia, retrieved 11:08, 4 June 2008 (UTC).

According to Conrad Bock (2003), there there are three kinds of nodes in activity models:

Below is a complete example (copied June/2008 from the MetaUML website):

User eats until he has had enough. Then he both reads a book and listens to some music, until he stops.

Flows (or edges) describe connections between 2 actions. These edges can be drawn with arrows in various ways.

Usually in activity diagrams, actions are simply connected through an unlabelled arrow. In addition, you also can include an object in the flow. These objects can carry data. Finally, instead of objects one can use "pins".

An arrow to a connector (a small circle with a letter) and then from a same connector to a activity node does the same job as a simple arrow. (not shown here)

(stub section, needs to be completed). 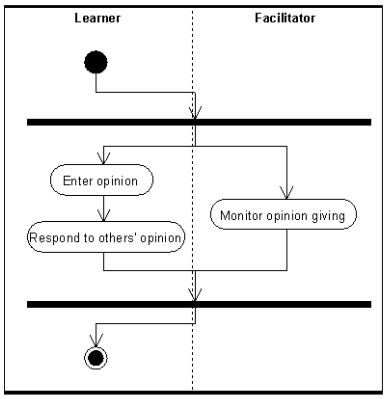 Below some more pictures that show that activity diagrams are popular withing the IMS Learning Design community.