The Internet Channel is a modified Opera browser for the Nintendo Wii and that connects through WIFI to the Internet. It supports the same web functionalities and standards that are included in the desktop versions of Opera, including CSS and JavaScript. On the other hand, it only seems to support Flash 7 (April 2008).

This web browser is not included when you buy the Wii. It will cost 500 Wii Points (about 5 Euros). E.g. in Switzerland you can buy 2000 points for CH 37.- in a shop. You also can buy points through the shopping channel with a credit card. (April 2008).

Basically, the Wii "Internet Channel" browser may be like Opera 9, including

By default, most web pages hardly can be read since the resolution of a TV screen (and the resolution the Wii supports !) are really low. There are three solutions to this: problem.

User input is fairly well done. No surprise here, since Opera managed to create web browsers that even work on a cell phone.

Below are some pictures. I made them with my cell-phone and you can enlarge them. 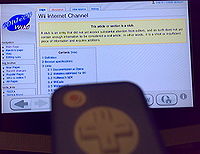 Edutechwiki in vertical mode. Readable from the sofa, it's even a bit too big.

You Tube zoomed out - not readable

You Tube zoomed in - and moving with the B button

All technical information articles at Opera seem to be dead. Nintendo put an embargo on these. There doesn't seem to be any replacement. There are several theories about this, e.g. Nintendo doesn't want 3rd party developers to become too creative, the API may change again etc... (April 2008).

On the other hand, both Hullbreach (HTML/Canevas/JS) and WiiCade (FLash) SDK's seem to do well (not tested yet).

Hullbreach Wii Opera SDK seems to be very popular library for game programming for the Wii's Internet Channel. Daniel Gump develops this SDK for Hullbreach, a MMORPG game, but one can find small games made with with the SDK on the Web, e.g. Wii42.

WiiCade is a website designed to provide users of the Wii console with online games using the built-in Opera (Internet Channel) browser. This is a Flash API. “The WiiCade API was introduced to provide developers with the ability to access the buttons on the Wii Remote controller. Specifically, the API is capable of providing access to the Directional Pad and the A, B, +, -, 1, and 2 buttons. Access to these buttons is not hampered by the default actions in the Opera Browser, and the game can be configured to allow or disallow the Opera zoom functionality. Furthermore, the API provides support for the use of the Wii Remote controller in a sideways configuration.” (Wikipedia, retrieved 10:28, 17 April 2008 (UTC).