This articles summarizes some ideas and examples about physical visualization, in particular with respect to project management and related areas. It is linked to our interest in making and education, e.g. 3D printers in education or Computerized embroidery in education or Laser cutting in education.

According to Wikipedia (4/2020), a data physicalization (or simply physicalization) is a physical artefact whose geometry or material properties encode data. It has the main goals to engage people and to communicate data using computer-supported physical data representations.

Huron (2014b) [1] “asked people to create, update and explain their own information visualizations using simple materials such as tangible building blocks. We learned that all participants, most of whom had no experience in visualization, were readily able to create and talk about their own visualizations.” (Overview, retrieved July 2016). Based on a close observation on how people did build representations with tokens - for more information, consult the project website - the authors define a "token-based" visualization method, that they describe as follows:

To construct a visualization the necessary components are:

The process of developing the constructed visualization starts from initializing the environment in which the construction will take place. Then the data units are mapped to the tokens and the tokens visual attributes are assigned meaning according to the data. These tokens are then assembled in the environment. Changes in data can subsequently be expressed by manipulating the data token.

3 Made with Lego and compatibles

This section summarizes some visualizations made with LEGO bricks.

See lego-compatible thesis project board (a project we initiated in Nov 2012). 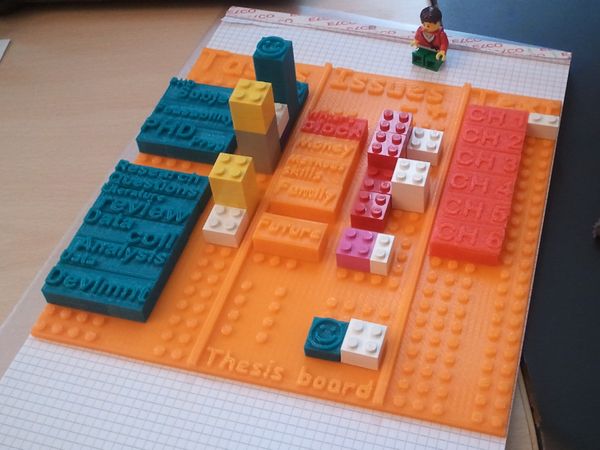 “an alternative way to represent time schedule tracking by stacking different lengths of Lego blocks as a way to convey different sequential time periods. stacking hourly rows on top of each other builds up the whole day, while color represents the different projects at hand. a whole week of time tracking is created by setting up a series of rainbow-colored days.” (Lego-based time-tracking, retrieved nov 22, 2012)

Michal Hunger, in his On LEGO Powered Time-Tracking blog post describes how he uses it.

“I made up a single width column as ruler for the work hours (from at around 10 am up to 6 pm). So I can easily see whats missing and at what time I did something. For the days of the workweek I chose the rainbow color scheme (red, orange, yellow, green, blue – Monday to Friday) for the longer base row that I stack my hours on. So I can gather a whole week of time tracking until I have to enter them in some time sheet (software). I put the columns of a whole week on top of a green building plate to fix them.” 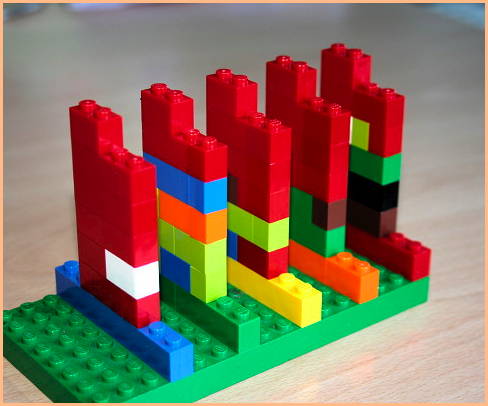 The Tangible Bug Tracking project “is a practice to build a tiny structure which is representation of a software bug. Those are build with LEGO blocks and placed in the team’s workspace. LEGO bricks are represented as the priority, dependency, difficulty of software bugs by developer. It is a kind of information radiator.”. According to the author, Takeshi Kakeda, BUG-LEGO has three benefits: 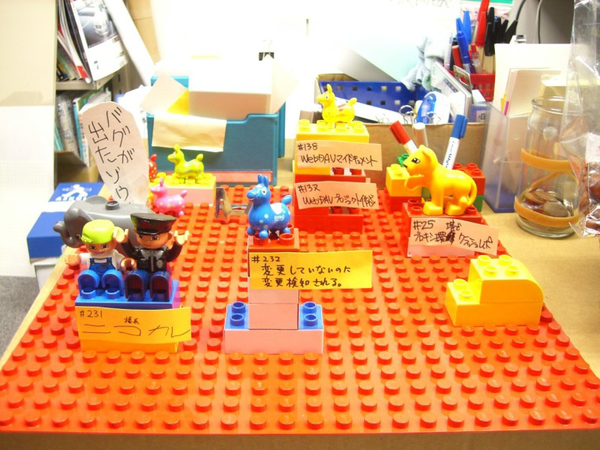 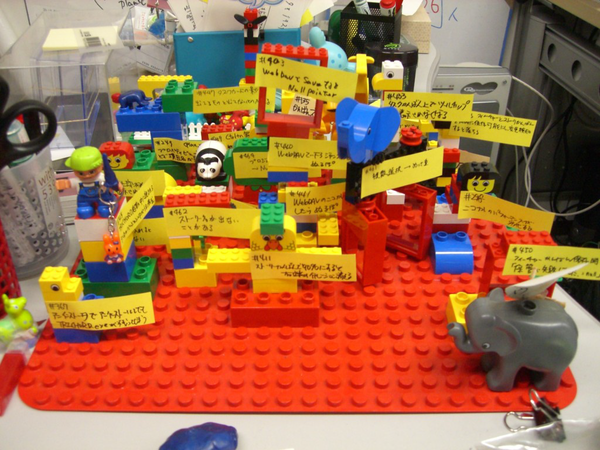 “The personal feeds from webapplications like Plazes, Flickr, and Last.fm tell much about the activity of an individual on the internet. In this project we aim to explore how you can visualize the changes of your web identity over time and create a physical link between your virtual and real identity. The interface consists of both a physical table and a web application. This direct feedback from your web identity is customizable and can be connected to any RSS feed.” (Wable, retrieved nov 22, 2012).

“Samuel Granados has discovered an efficient way to display geographical data in 3D physical reality. Just use Lego [samuelgranados.es]. One side of the map reveals the emigrants of each zone, the opposite shows the immigrants (both represented by the volume of the pieces).” (3D Infographic Maps Built with Lego, retrieved nov. 22 2012) 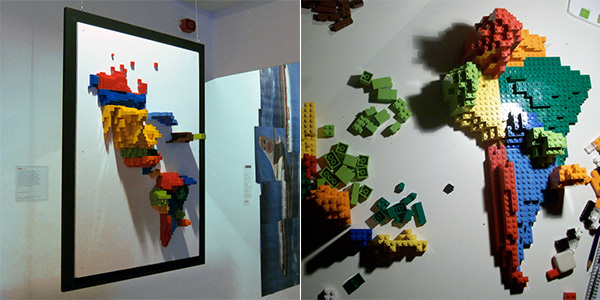 “Now GM is using Legos for problem resolution tracking. If a transmission block breaks during durability testing, they’ll file a traditional paper report, but the case will also be added to a Lego board. Legos in various colors denote the area of the vehicle, and the block size denotes the severity of the problem.” (How GM Is Saving Cash Using Legos As A Data Viz Tool. retrieved nov. 21, 2012) 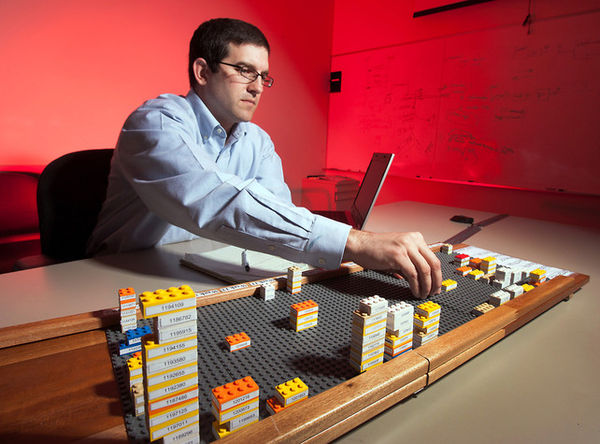 “WellStar is using the boards to track on-time starts at the doctor’s office, and even manage its physician-payee relationships--which has led to a series of fixes projected to save the company $1 million.” (dito) 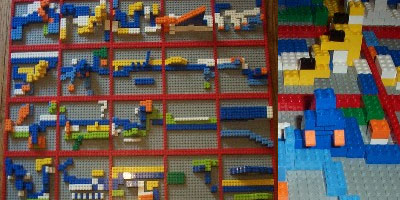 4 Visualizations made with other materials

Botros et al. (2016). [2] investigate “how a plant—a living visualization—whose health relies on the plant owner’s level of activity, can engage people in tracking and self-reflecting on their fitness data.”

This design is driven by the following design criteria:

Results show that, “Overall, participants increased their awareness of their activity level. During the three weeks of the study, participants also changed their habits towards a more active lifestyle.” (p. 4)

Results of a three week study with 14 participants how that “materializing personal data encouraged the interpretation and reflection on participants’ activity.” More precisely: “The fact that the visualizations required personal knowledge to be interpreted seemed to have fostered reflection on the pieces and the corresponding runs. It led participants to engage with the objects, by observing them, testing their limits or comparing them. It also meant that participants could display them freely without feeling as if they were over-exposing themselves: it neither felt as bragging about ones performance, nor did it felt as displaying something one would have preferred to keep to oneself.” (p. 2208) Also, “The study revealed a great acceptance for the Activity Sculptures. Especially their ability to improve motivation and self-reflection convinced the participants” (p. 2209).

The authors aimed to visualize several runs. For each run, distance, duration and average speed was to be encoded.

From several prototypes, four types of sculptures were selected:, a lamp, a jar, a figure and a necklace.

Extensibility was supposed to uphold users' interest for the sculpture and motivation to run.

DIY Matrix [6] describes an implementation of Jacques Bertin's physical matrices that he called Domino 1, 2, 3, 4 and 5. The idea is to arrange data that is not temporal in a matrix, for example cases (people) in columns and data representing their opinions in lines and then to permutate both lines and columns until optimal clusters emerge.

The following image shows a replica made by the Aviz team and described in the DIY Matrix article [6]. Each square (domino) is composed of 11 parts. Assembling all the parts took about 50 hours and laser cutting 11 hours. 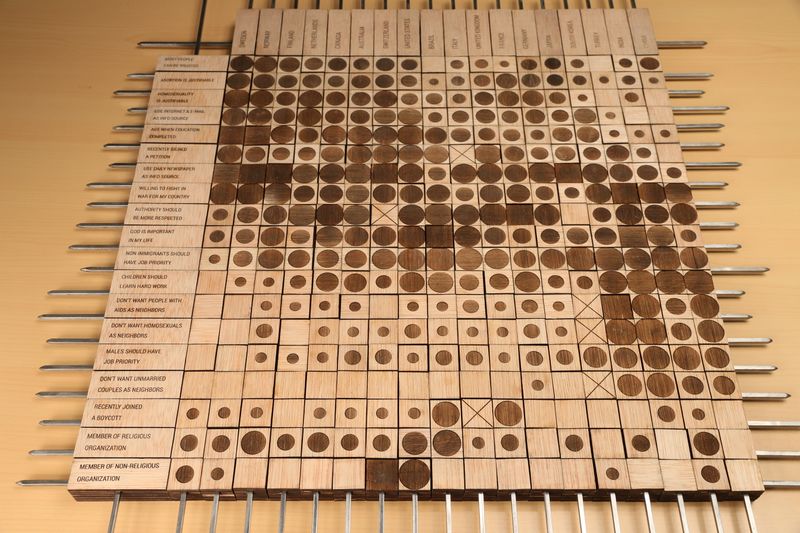 Passive physical visualizations can be created with many tools. Among the easiest ones are play kits like Lego.

To create custom elements one can use several types of digital fabrication tools, e.g.

Tools published in the literature are rarely available.

MakeVis is a toolkit programmed in JavaScript [8] that allows generating models usable for digital fabrication. As of July 2016, this system does not seem to be available to the public.

MoSculp by Zhang et al. (2018) [9] present “a system that visualizes complex human motion via 3D motion sculptures—a representation that conveys the 3D structure swept by a human body as it moves through space.” (p. 275). In the discussion, the authors present Mosculpt as “a system that automates the creation of motion sculptures, and allows users to interactively explore the visualization and customize various rendering settings.” The conclude: “Our system makes motion sculpting accessible to novice users, and requires only a video as input.”

A very different perspective is to use lego building as substrate for team building, management, etc. E.g.:

See also the other links above and the example we discuss.