According to Wikipedia, retrieved 14:48, 14 October 2011 (CEST), “3D printing is a form of additive manufacturing technology where a three dimensional object is created by laying down successive layers of material. 3D printers are generally faster, more affordable and easier to use than other additive manufacturing technologies. 3D printers offer product developers the ability to print parts and assemblies made of several materials with different mechanical and physical properties in a single build process. Advanced 3D printing technologies yield models that can serve as product prototypes.” 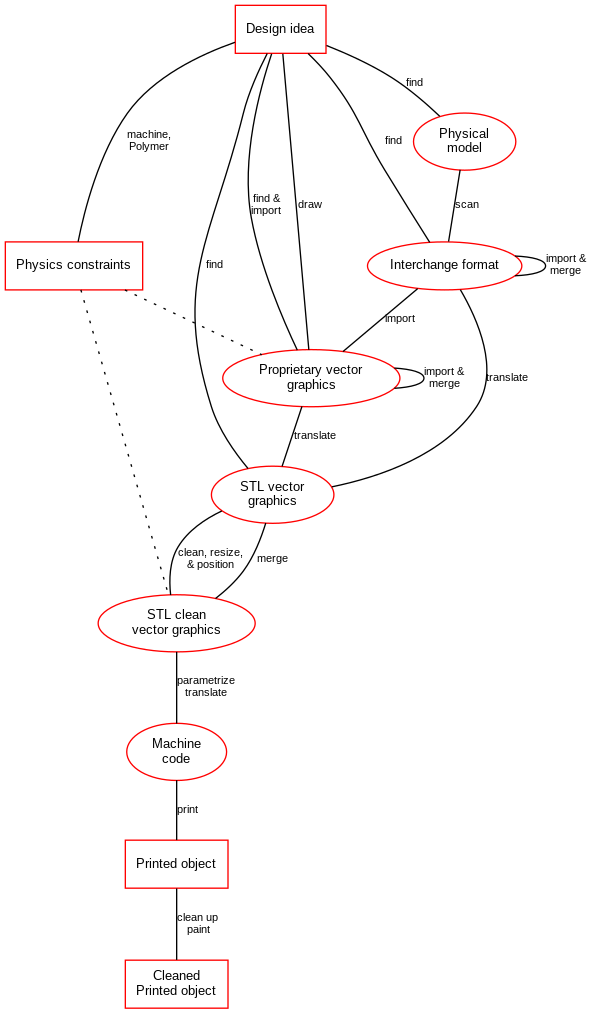 As you can see, there are several paths that lead from a design idea to a printed object. Absolute beginners can start simply by downloading STL files from a repository such as Thingiverse, positioning it, maybe re-sizing and then printing it. Intermediate users can merge existing objects together at any level, e.g. at STL level with a tool like Meshlab (free) or Netfabb (commercial).

Some low level "how to print an STL file" was described in 2011 in the First steps with the RapMan V3.1 3D printer (one of the first commercial kits for hobby printing) article. Since that type of operation is explained on hundreds of website we refrain from doing it. As of 2017, our latest documented printer is the Felix Pro 1.

Also take note that respecting physical constraints is important ! For example, you can't print bigger than your print area, you can't print designs that have a large footprint with ABS, you can't print large overhangs with a printer that doesn't allow printing support structures, etc.

As of 2017, 3D hobby printer slicing software all accept the STL file format. According to [ Wikipedia], “STL (STereoLithography) is a file format native to the stereolithography CAD software created by 3D Systems.[1][2][3] STL has several after-the-fact backronyms such as "Standard Triangle Language" and "Standard Tessellation Language".[4] This file format is supported by many other software packages; it is widely used for rapid prototyping, 3D printing and computer-aided manufacturing.[5] STL files describe only the surface geometry of a three-dimensional object without any representation of color, texture or other common CAD model attributes.”

To convert other 3D assets to STL we recommend using Meshlab. However, some drawing programs may have better exporters for their native formats. Conversion usually doesn't go very well. Often Meshes need to be repaired, Object size, rotation and positioning also may need fixing.

Other supported formats are *.OBJ (an older simple interchange format that can include textures) and *.PLY P(olygon file format) a scanner format.

Additive Manufacturing File Format (.AMF) is a new XML-based open standard for 3D printing that includes color. Another contendor is 3MF. But, as of 2017, neither is very popular, read 3D printing file format cage match: AMF vs. 3MF July 21st, 2015. By Dennis Bella

Of course, machine code also can be exchanged and such represents a file format. Most hobby printers use standard g-code.

Experimentally, this wiki includes the StlHandler extension which can display STL formats. STL is a relatively safe format for inclusion since it only contains triangles, e.g. no JavaScript or additional mediafiles. File:Lego4x4x2third.stl

As of oct. 2014, there exist several books, some of which are available as e-books from on-line sellers like Amazon or Kobo