1 Using icons from the Noun Project

Let's create an embroidery from single complex SVG paths as they can be found on the noun project. This website has a huge amount of SVB icon collections that can be combined into nice embroidery.

If you are unable to get this done, you can start from our own example, but do not publish it on any website without giving credit to Liv Iko.

After downloading some icons from the noun project:

After arranging the four drawings, you could see something like this: 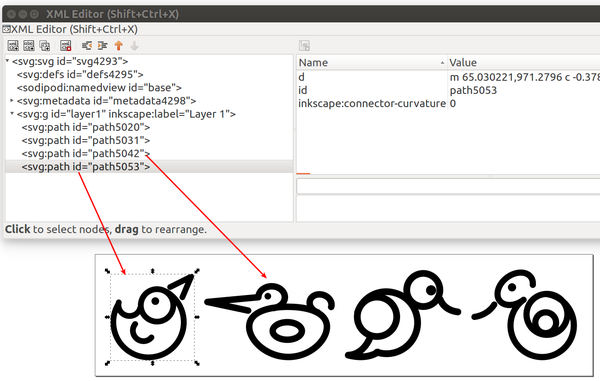 Each bird is a a single path

You now should see four piles of black objects.

The result are layered "path" objects composed of fills that you now should color a bit. For each object, including the large black backgrounds: 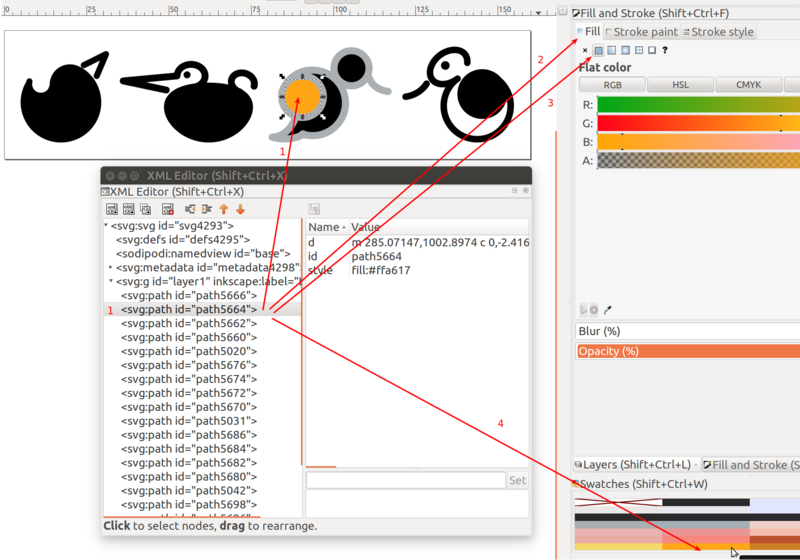 Color each object. You can use a thread palette for that

Currently we have up to three layers, which is too much for stitching. 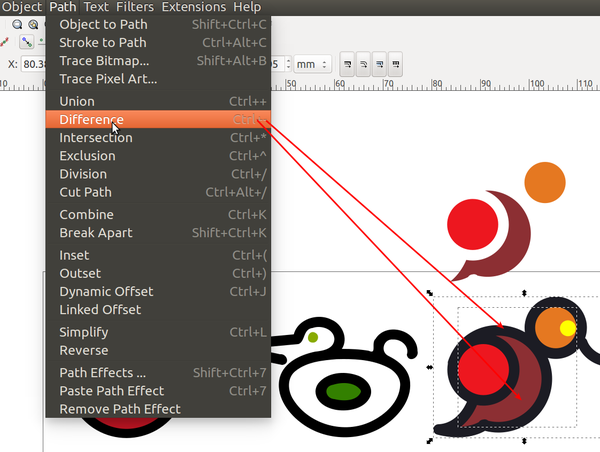 Color each object. You the difference operator to subtract a smaller area from an underlying area

You also may want to cleanup a bit. In Inkscape, click on File->Clean up document

This is not strictly needed, but you should take the reflex of creating layers into which you put different types of drawing objects.

In your SVG drawings you only got so-called fills. The plugin will translate these into areas filled with linear motif. You can change the angle and the Stitch length for now.

The simulated result now looks like this (DST gets the colors wrong, but that's not a real issue since most people do not have a sixteen needle machine with the good threads already installed).

As you can see there are also some extra objects that should not be stitched, but they won't hurt. The lines can be easily removed.

The stitched result is not optional and for two reasons 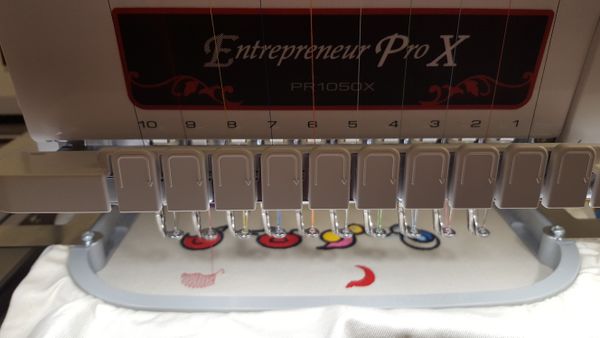 The second version (PES) uses an underlay for the fills. 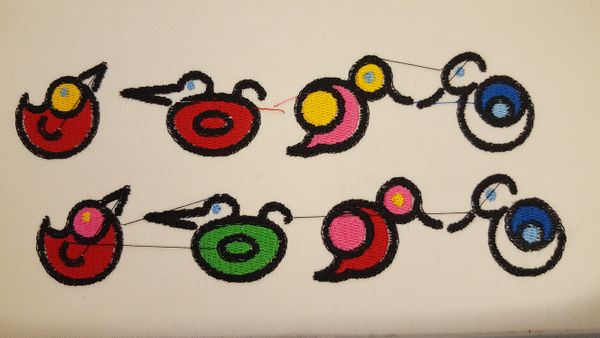 In order to get satin stitches we need to replace fat strokes by two lines. In principle the following should work, see the explanations in the InkStitch - satin columns tutorial.

Since this is design is not too original, we only did this with the first bird. The example is described in Adding direction lines. Feel free to improve your InkScape node editing skills by completing the other birds.

Finally, if you are interesting in combining fills with satin stitches, also have a look at the InkStitch - from satin columns to fills with satin borders tutorial or go through the next example

Before trying out this example, make sure to understand the procedures explained in InkStitch - satin columns. E.g. you should be able to:

Let us stitch a love logo by Louis Prado 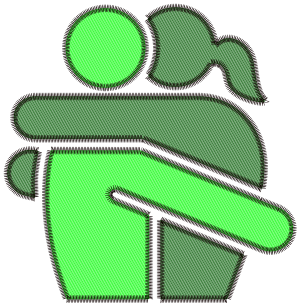 This file is now stitchable as is, i.e. would stitch normal zigzag borders as you can see in the SVG above.

In order to get satin borders we duplicate all the objects, then remove the fill and translate the strokes to path

Copy/paste-in-place all the objects to a new layer

Now you got rails for the satin stitches. Since the inner and outer paths of some objects will have different number of points you should either make them even or (better) add rungs. Otherwise you will get the following kind of error message error: satin column: object path5452-3 has two paths with an unequal number of points (34 and 29)

Make cuts so that each subpath starts in the same place.

Do this for all the border path objects. You must

The stitched outcome looks OK for both the 8cm Version 4 (described above) and a quickly reduced to 5cm version 5. A first version 5 (upper right in the picture below) had too much expand, the fill is larger than the border. The second version (lower right, in red) is OK, except that I had to change the lower bobbin and forgot to properly backtrack. Also the tissue is not optimal for stitching. I use cheap woven napkins and a self-adhesive stabilizer.

Contents of this page including pictures and SVG files are also available under the GNU Free Documentation License and the Attribution 4.0 International (CC BY 4.0) license.

The Inkstitch project can use any element (text fragments, SVG files, pictures) for the project's official docs without giving attribution (just copy and paste).