Digital design and fabrication in education

Digital design and fabrication (in french "Conception et fabrication assistées par ordinateur", CFAO) is the combination of computer-assisted design (CAD), computer-assisted manufacturing (CAM) and Computer-numerical control (CNC) machines. This combination is also known under other terms, e.g. Digital modeling and fabrication, defined by Wikipedia (May 2018), as “design and production process that combines 3D modeling or computing-aided design (CAD) with additive and subtractive manufacturing. Additive manufacturing is also known as 3D printing, while subtractive manufacturing may also be referred to as machining,[1] and many other technologies can be exploited to physically produce the designed objects”. Another term is digital design and making, e.g. in the ECRAFT2LEARN project.

Digital design and fabrication is particular interesting way of learning technology itself and learning through technology (e.g. IT skills, design skills, project skills). According to Hsu, Baldwin and Ching (2017), “Making, a process of creating something, has become a movement tied to encouraging growth in science, technology, engineering, and mathematics (STEM). The maker movement incorporates: 1) makers, who are involved in experimental play; 2) the makerspace, a community of practice for makers featuring a variety of supplies; and 3) making, activities focused around working and learning with technology (Dougherty 2013). Making spans a myriad of activities, including cooking, sewing, welding, robotics, painting, printing, and building (Peppler and Bender 2013). Making activities often involve programming and physical computing (e.g., robotics) that creates interactive experiences of sensing and controlling the physical world with computers (O’Sullivan and Igoe 2014).”

We may expand this sometimes later. For now, also read:

There is also a consolidated bibliography

Several rationales to introduce digital design and fabrication for learning in general and ICT in particular have been put forward, directly or indirectly. Below, we summarize a few strands of thinking.

Digital design and fabrication usually happens in a makerspace, i.e. a space within which people can create things, usually in two steps. In a first step, some design is digitally created, e.g. with a general or specialized drawing program. In a second step, the design (or parts) of it are made by a digitally controlled machine, e.g. a 3D printer, a laser cutter, a milling machine or an embroidery machine. Educational makerspaces are usually different from fab labs in two respects: They are closed to the public and they lack more expensive (e.g. laser cutting) and dangerous (e.g. milling) machines.

Davee et al. (2015) found 45 different titles for these spaces. “Makerspaces, as a more generic and inclusive term, has increasingly come to represent an extremely wide variety of creative endeavors, tools, demographics, and types of places where making happens. Reflecting this, these spaces go by many names.”. E.g. make space, makery, idea lab, maker art, tinkering space, maker lab, but also design-lab, hands-on-learning space or domain specific such as art center, gallery space, media lab, arts camp. From this variety, the authors conclude: “Evident in these names are a diverse range of making forms, including robotics, music, media, arts, and technology. Various approaches to making are also revealed, including those emphasizing play, design, the arts, science, tinkering, collaboration, informal and hands-on learning, as well as lab and studio approaches.” (Davee et al., 2015). Finally, their review reveals three types of makespaces in libraries, museums, schools and community organizations: dedicated spaces that concentrate tools in a single space, distributed makerspaces that use several spaces and mobile that allow bringing equipment either with carts or full trucks to other places.

Abbie Brown (2015) distinguishes a curricular hierarchy of making activities, derived from her own experience in a year-long 3D printing experience:

According to Oliver (2016), makerspaces are defined by core tenets, e.g. self-directed learning, serious play, tolerance for failure and retrial, peer collaboration and sharing between experts and novices.

Learning organization or making activities depend a lot on the context. Most digital design and fabrication happens outside formal education, e.g. after school activities in a school setting.

Learning arrangements in maker spaces depend on the context. Sheridan et al. (2014) found in a comparative study of three cases several adaptive learning arrangements. “One of the distinctive features of all the spaces is the way diverse learning arrangements (e.g., solo exploration, facilitated one-on-one or small group projects, collaborative projects, online forums, and structured classes) often informally evolve to support the projects and goals of the participants.”. Duration of projects ranged from minutes to years, depending on both the nature of the project and the type of makerspace. The same authors observed the emergence of a “We saw evidence in each makerspace of a hybrid model that includes many of the ways of seeing, valuing, thinking, and doing found in participatory cultures yet incorporates pedagogical structures found in more formal studio-based settings, such as demonstration, facilitated workshops, and critique (Hetland et al., 2013)”

In formal below university education, we can distinguish two situations: Formal classes, e.g. design and technology in UKs lower and higher secondary schools, and "technologie" in the french lower and higher secondary school system. These classes follow formal learning goals but are probably fairly open to more learner centered pedagogy. Occasional design and fabrication activities to support some curricular or extra-curricular topics.

Evaluation of learner activities both in formal and informal settings can evaluate products (things made), product presentations (e.g. in online portfolios) and other contributions, e.g. participation in class, on forums and on wikis. Oliver lists assessable competences “as both hard skills (working with tools and manipulating materials) and soft skills (pursuing interests, staying committed through trial and failure, effort), application of the design process (questioning, prototyping), craftsmanship in making, community building (collaborates with peers, cleans up), and content understanding when applicable (Chang 2015; Yokana 2015). In addition, educators can look at the emergence of “metarepresentational competence” in makers or an “understanding of how tools support communicating an idea, when to invoke certain tools, and for what purpose” (Sheridan et al. 2014, p. 508).”

Evaluation also can take into account evolutionary stages, i.e. whether participants can reach a "create" stage. 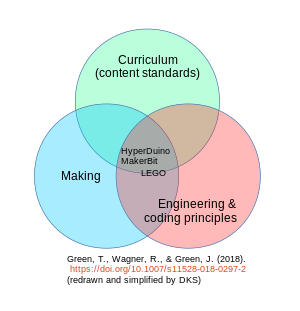 Green at al. 2018, A Look at Robots and Programmable Devices for the K-12 Classroom

Digital design and fabrication for ICT education most often means assembling a robot from a variety of technologies and the programming it. Some technology, e.g. HyperDuino, Makerbit or LEGO Mindstormsare more suitable to combine making and programming while respecting the curriculum, according to Green at al. who created a little taxonomy that allows classifying use of tools according to educational outcomes. “The curriculum domain focuses on outcomes that support learners using the tools to understand and demonstrate understanding of content (particularly related to content standardsThe making domain is strongly focused on outcomes that are craft-centric (i.e., making a product). The principles of engineering and coding domain focuses on outcomes associated with coding as the curriculum; learning to use the tools is the primary outcome of this domain. The overlapping of the circles combines the outcomes of the different domains.” (Green et al. 2018)

Since both Digital design & fabrication and ICT education are most often associated with engineering and since educational robotics has long standing tradition starting in Papert's constructionism, it is natural that making is frequently associated with robotics. “Making spans a myriad of activities, including cooking, sewing, welding, robotics, painting, printing, and building (Peppler and Bender 2013). Making activities often involve programming and physical computing (e.g., robotics) that creates interactive experiences of sensing and controlling the physical world with computers (O’Sullivan and Igoe 2014).” (Hsu et al. 2017)

Sousa and Pileckki (2013) associated artistic thinking with divergent thinking. “in some STEM classrooms, the students are completing experiments that merely confirm a scientific principle that they have already learned. Such an activity is of little interest and hardly challenging. [...] In divergent thinking, on the other hand, the student generates several ideas about possible ways to solve a problem, often by breaking it down into its components and looking for new insights into the problem. After gaining those insights, the student may then use convergent thinking to put the parts back together and solve the problem in a different and unexpected way. [...] Divergent thinking works best with poorly defined problems that have multifaceted solutions. This is the type of thinking that is typical of artistic activities.”. In more simple terms:

Halverson and Sheridan (2014) cited by by Davee, Regalla and Change (2015) point out that maker and arts spaces share a similar architecture. “Many makerspaces resemble studio arts learning environments, where participants work independently or collaboratively with materials to design and make”. However, the study by Sheridan et al. (2014:526) also show that makerspaces unite more than other spaces. “Among us authors, we have prior experience in many sites for learning in the making—arts studios, performing arts companies, and game design and digital media labs. Unlike these disciplinary places of practice, makerspaces support making in disciplines that are traditionally separate. [...] This blending of traditional and digital skills, arts and engineering creates a learning environment in which there are multiple entry points to participation and leads to innovative combinations, juxtapositions, and uses of disciplinary knowledge and skill (Brahms & Crowley, 2014).”

However, Gibson and Bell (2011) do point out that many teacher student's are afraid of mathematics. If it is seen as difficult and threatening by the teacher, mathematical contents cannot be delivered effectively in a "making" class

According to Hsu et al (2015) citing Martinez and Stager (2013), the maker movement is rooted in the works of Dewey, Piaget and Montessori. We do not exactly share this view since tinkering and bricolage (and that is the essence of it) is not directly related to pedagogy and precedes it, e.g. in the form of craftsmanship, engineering, and more modern DIY. Also, the influential fab lab movement rather did start from "let us build spaces that allow to create most everything). However, makers in education quickly made the link, since making is per se "hands on".

“The idea that “teaching thinking” is appropriate in elementary school does have some antecedents but in 1970 it was certainly not current in the mainstream of American education circles. I see the movement that goes under names like “thinking skills” and “critical thinking” as something that came to prominence much later and was supported if not inspired by a wave of hype on the lines of “Logo teaches logical thinking.” Reading “Teaching Children Thinking” should show that my own views were much more complex: Programming can be used to support learning about thinking, which is a very different claim from saying that in itself it improves thinking skills.” (Papert, 2005)

(see also other pages in the Category:Fab lab