A webtop is a kind of rich internet application that runs in a web browser and that integrates various web-based applications, typically lots of different kinds of information feeds (via RSS), some virtual office applications, some social software such as Flickr or YouTube. You may add other RSS feeds and most webtops also let you add web widget code.

Webtops are some kind of mashboard. “These Web applications incorporate the features of a mash-up coupled with the concept of a dashboard; the Web application typically contains a collection of indicators that signal change when the status of content of personal interest changes. Aspects of these applications tend to be configurable and personalized for an individual's preferences.” (QedWiki FAQ, retrieved 15:08, 16 May 2007 (MEST)).

For some use cases, webtops can be an alternative to running portalware like Drupal. However, this requires that personal webtops or parts of them can be shared with others. This is not (yet) the case for most simple webtops.

An associated and somewhat overly optimistic slogan is wherever you go, whatever you do, you can bring your desktop too([1]). See also web operating system, as well as virtual office and social software.

It is difficult to make a clear distinction between Ajax homepages / aggregators like Netvibes or Pageflakes and a so-called web operating system (WebOS) that could act as some sort of " office 2.0". Some webtops (like Pageflakes) are sharable, but it is not very clear to the writer how webtop permissions should/could interact with the permission system of imported widgets. The Wikipedia web desktop article isn't clear either about the difference: “A web desktop or webtop is a network application system for integrating web applications into a web based work space. It is a virtual desktop on the web, running in a web browser as software. Web desktops often are characterized by an environment similar to that of Windows, Mac, or Linux, but are now considered to have much more functionality being dependent on the internet. Typical benefits include the ability to save work and settings over the internet rather than to the local desktop.” (Wikipedia, retrieved 13:03, 27 April 2007 (MEST)).

... is hard to know. Here is Nova Spivacks' timeline of the past, present and future of the Web. Webtops (mashups) and web widgets are considered later web 2.0 innovations: 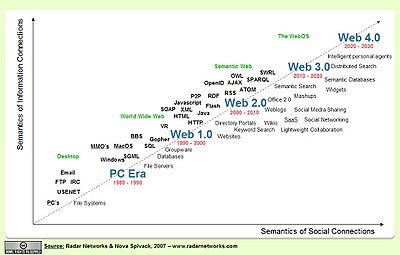 “Web 2.0 was really about upgrading the "front-end" and user-experience of the Web. Much of the innovation taking place today is about starting to upgrade the "backend" of the Web and I think that will be the focus of Web 3.0 (the front-end will probably not be that different from Web 2.0, but the underlying technologies will advance significantly enabling new capabilities and features).” ([4], retrieved 13:03, 27 April 2007 (MEST))

Daniel K. Schneider thinks that there will be an imitation effect and existing simpler ajax homepages will integrate features like file editing and storage and come up with stables APIs to integrate any sort of web application. The also will offer sharing functions (hey people want to show their cool webtop!). Therefore, I believe that the distinction between webtop's and webOSs made fade. The three big near future things could be:

3 Architecture of a webtop

Some technical features of a typical webtop:

A crucial question is how to build applications for these environments. Most of the webtop/webos seem to offer web-based IDEs and/or APIs for javascript programmers.

The advantage of a webtop is access to a personalized desktop from any place and from several Web-supporting devices, no need to install and to maintain any applications, application sharing among users (i.e. groupware and social software support).

Webtops are enabling tools in the sense that they provide freedom for workers that have to cope with slow, unresponsive or event hostile IT services. E.g. with webtops, a teacher can set up teaching pages as well as personal learning environments for each student in a few hours. All he needs is a web browser and a sharable webtop like pageflakes.

Disadvantages is that you don't know if you can trust the plateform and/or its components to stay around and so backup is also an issue. Then there may be security problems. Speed may an issue (both for client-server communication and GUI reactiveness). Therefore some authors, e.g. Ezzy (2006) rather suggest to webify desktop applications. A good example would by iTunes or various computer games or initiatives by Microsoft to integrate their office tools with their Sharepoint server technology.

Webtops may have a huge potential in education since they are one of technical solutions to implement personal learning environments or learning e-portfolios. In addition, for some variants of project-oriented learning scenarios, webtops can replace more traditional portalware like C3MS. Have a look at the C3MS project-based learning model that Daniel K. Schneider started to adapt to this new technology.

Schools (or other organizations) may in the future offer a webtop to each student so that he can organize his activities on cyberspace. Some teachers then can integrate these into classroom activities and also pull together information from individual webtops in a sort of central class mashup. A similar solution would be the use of a social software like ELGG, but then someone has to install and configure a server.

Webtops may turn out to be truly teacher empowerment software, but under the condition that they provide more writing tools and refrain from focusing only on tools like multimedia content presentations (e.g. so-called learning objects), quizzing, etc. Webtops will be successful if they do not try to mimick e-learning architectures that clone old CBT dreams, but if they also support learning with computers. WebTops do have some potential to become true cognitive tools, collective environments, personal learning environments, learning e-portfolios and so forth.

Below we include lists of webap/webos. Some of these webapps are open source and free, some closed and free, some in between and some may hope to provide these services on a probably small subscription basis. Since (useful) webtops are fairly new (most are in Beta stage on 13:03, 27 April 2007 (MEST)) it is difficult to choose and even difficult to know which ones are popular and for which reasons. E.g. most Wikipedia articles on the subject are fairly meager so far. One big question is to know how many of the impressive list of web 2.0 applications can (and should) be integrated into a webtop or whether they need to include more operating system functionality, i.e. evolve into web operating systems.

See also the list in Web desktop (Wikipedia). Daniel K. Schneider would like find educators who are using such an environment in class, e.g. encourage students to build their personal learning environment ....

The list below is not exhaustive. Also, as we said before, the distinction between a more ajax home page and a webos is not really clear.

My components of older portals