This article explains how to embroider emoji with InkStitch. It is especially aimed at people who want to recover and improve cloth (upcycling) , for example sweaters with small moth holes.

This page contains embroiderable SVG: Click until the SVG displays as a web page (so just display the SVG design, nothing else), then save this *.svg page from your browser CTRL-S. Make sure it's SVG, saving a raster image displayed in this page won't do it. You have to click twice on an image displayed on this page, first to display the page with an image + its documentation (images in a wiki are reusable resources that have a separate life!), then click again on the image to get to the SVG. The "media" links display the SVG page directly. Just save it. You will find the SVG file in your downloads (unless you know how to configure your browser).

According to Wikipedia, “Emoji (絵文字, pronounced [emodʑi]), is a term derived from Japanese for pictograms used in e-mail messages and web pages.”. Many emojis are standardized as Unicode characters that can be displayed in multiple environments such as instant messengers, email clients, web pages (HTML) and various social networks such as Facebook and Twitter. In 2020, the latest version of the emoji game is defined in the document Unicode Technical Standard #51, version 13.1. This standard defines an emoji as “colorful pictograph that can be used inline in text. Internally the representation is either (a) an image, (b) an encoded character, or (c) a sequence of encoded characters.”

The word emoji is masculine and its plural is either emoji or emojis according to Wiktionary. In summary (simplified), emoji are characters in fonts that are displayed either with a "text" style (simple graphics) or with more complex graphics that include color variations.

In summary, an emoji is defined by

To find an emoji and a graphic you like, we advise you to check Emojipedia first.

There are several sites that allow you to download emoji. See fr:Emoji for more information. In Dec 2020, we recommend Iconify.design which provides several emoji games (collections). You can either first choose a collection (below we list the most important ones) and search for an emoji in the collection, or search among all emoji on the site. Note that some collections are not complete according to UniCode 13 (or better) definitions.

Once you've found your emoji, you can either download the SVG code (useful if you know how to use the SVG editor) or the SVG file (recommended). Note that the SVG code may contain a black rectangle that hides the drawing and that you will have to remove.

2 Principles to embroider an emoji

To understand what happens next, you need to be familiar with the basic principles of InkStitch (creating fillings and satins) and know how to do manipulations in InkScape, such as "difference" and "union" of objects and breaking knots.

'Since SVG designs are made in several layers, they should be simplified and, as a general rule, take care to create small overlaps. It is recommended that you never embroider more than 2 wide layers, otherwise the embroidery becomes too stiff.

Be aware that in (semi) professional embroidery software such as Stitch Era software, digitizing an emoji is less complicated, because the digitizing procedure includes an option to eliminate overlaps and it is very easy to add borders to embroidery objects.

The designs are not necessarily made in the same way. Some emojis are much easier to embroider than others ....

2.2 👸 Example of digitizing with a princess from the noto collection (google) 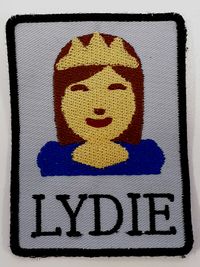 Batch of an emoji princess, simple version without satin

To follow this example, we advise you to download the SVG of the emoji "princess" from Iconify.design: noto:princess.svg.

Eliminating superimpositions is the most difficult part and usually the following method is recommended: process the objects from bottom to top (back->front position) in the object panel and do mostly subtractions (operator "difference" CTRL_-).

For the princess, you need for example

Example: To subtract a "sweater" object from an "oval" object, you need to

Note: An alternative way to flatten a drawing faster would be to export the drawing as a PNG file, then draw the image with colors (explanations to do).

Then it is necessary to enlarge some objects so that they have small superimpositions, this to avoid that there remain spaces between the embroidered objects due to the "pull effect". We advise to use the function Path->Outset , CTRL_) or Path->Inset , CTRL_(.). Before using this function, it is recommended to set the outset amount to 1px. Preferences -> -> Behaviour -> Steps -> Inset/Outset by.

Then, if you have a machine with only one needle, unify similar colors and sort the colors in order as much as possible

See the french sister wiki for 20+ other examples

The face screaming in fear 😱 (also called Home Alone, Scream, Screaming Face, Screaming Face in Fear) is another popular emoji. The Google noto shape has gradients and we will show how to create a face gradient with XML code editing and stitch manipulation of the embroidery design.

Creating a gradient in InkStitch is not yet a well-developed and tested feature, so it's hidden and you'll have to work with code. Making a good gradient in embroidery is quite complicated, but to create something that is acceptable, we'll use the following simple method: 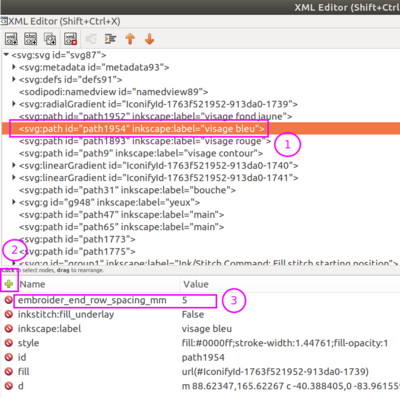