This is a green float

This is a yellow float

The float property was meant to create boxes around which other text can flow, e.g. something like the little green box to the right of this page. However, since CSS doesn't include any proper layout design language (like in XSL), some designers also use the float property for creating column layouts. As you can see by looking at the yellow and green boxes to the left and to the right, text will flow around.

Below is the code for both the float:left and float:right example

"Real world" examples would be the floating "Incomplete" and "Web technology tutorials" on top of this wiki page.

Maybe you don't need positioning ! Using simply the float:left CSS property/value combo, you can create simple fluid column layouts. We shall discuss an example that shows how to create a page with a heading box on top, a main body with three columns and a footing box.

Now let us explain how floats can be used to create page layouts. The basic principle shall be illustrated with a simple hypothetical example: Imagine that you have two columns, one should go to the left and the other to the right. Floats, basically (1) tell an element to float horizontally (left or right) and (2) that other sibling elements or text of the parent element can float around. The latter feature isn't used for layout.

The HTML for a two column layout would look like this:

The CSS alo might look like this, i.e. the second (right) box would float against the first one.

Let's now have a look at a more real example, i.e. a page that has something on top, followed by a threee column part, follwed by a bottom. Creating such a fluid three column layout is quite simple:

This page has the following layout: 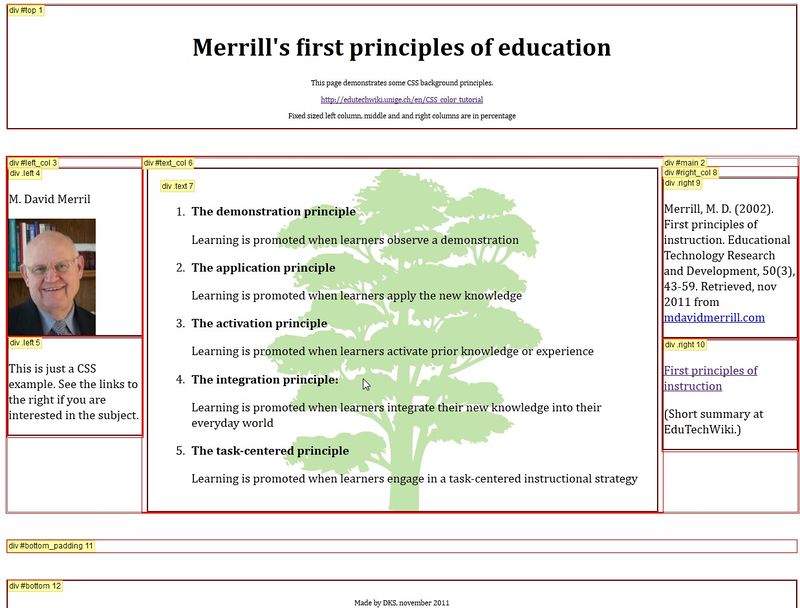 The CSS is included in the example HTML page. Look at its source. Its most important elements are:

Template you can use: