... the extent to which a group of participants and objects leave behind their local space and enter into some new remote space in order to meet with others, versus the extent to which they remain in their local space and the remote participants and objects are brought to them. One one side of this range we find physical face-to-face meetings and on the other immersive virtual reality and immersive telepresence applications.

... the extent to which a space is either synthetic or is based on the physical world. This spans the extremes from wholly physical to wholly synthetic environments. On one side we have telepresence applications (like videoconferencing) and on the other side CVEs that model participants and objects (visualizations, arts, etc.) with abstract data. 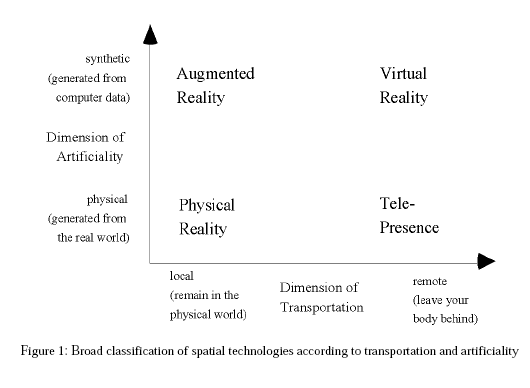 Benford et al. broad classification of shared spaces according to transportation and artificiality

... their level of support for fundamental physical spatial properties such as containment, topology, distance, orientation, and movement. On on end we find shared spacial frames (e.g. physical meetings or high-end telepresence systems. On the other end is telephone confencing and chat (no spatial containment).

According to Benford (1998b), Milgram and Kishino (1994) taxonomy includes three dimensions: