Scratch is an authoring tool for creating games, interactive stories, animations combining multimedia (sound, graphics, text). Scratch was developed in 2006[1] by the Lifelong Kindergarten Group at the MIT Media Lab and supported by various foundations. Scratch also can be considered a microworld.

Scratch is an object oriented programming language that is rendered in a visual graphic interface, available in many languages, allowing non-programmers to create animations, interactive games, visualizations without having to write code. Scratch targets children and educators who wish to include ICT and introduce programming concepts into their curriculum. Intended for children aged 10 and above, it has been used in classroom settings with younger children who can already read simple words (See example below).

As of March 2014, Scratch exists in two versions: 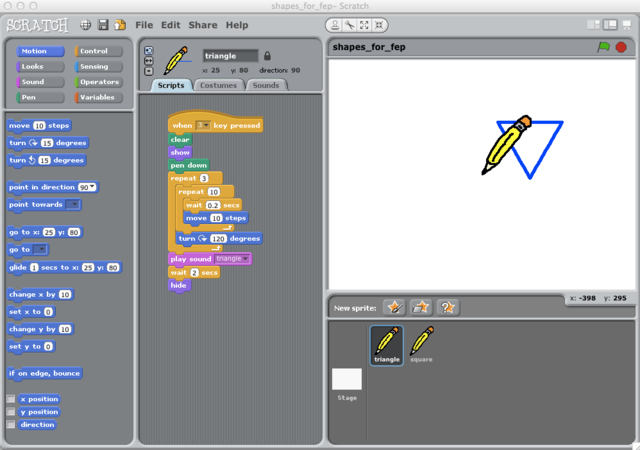 The Scratch interface is composed of a stage where all elements are placed (top right), a selection of palettes(top left) offering components (left) for piecing together a script by dragging them into the scripting area (center), access to media files (center top) that can be either created within Scratch (drawings, sound recordings) or integrated from existing sample files or already created files and a sprites area (bottom right). Sprites (objects) can be created, given properties and actions through scripts and placed on the stage as needed. At the top right, start and stop controls allow one to run scripts created.

Using the Scratch interface an programming language, children can build projects and learn the underlying concepts of programming. since these projects can in and of themselves be built around a particular subject being explored and investigated, the use of Scratch can support multiple learning objectives in a project-based learning approach.

Due to the accessibility of its interface, educators have also adopted Scratch to build interactive animations and visualizations to present complex concepts to students.

Scratch claims to be grounded in a learning by design approach, rooted in constructionist pedagogy. Literature and resources for educators and education researchers is also available.

Scratch 1.4 is free for download and installation on Mac, Windows and Ubuntu (Linux).

Scratch 2.0 is also free and should work with any modern browser

Scratch has and increasingly large community composed of developers, educators and students.

From within the Scratch interface, students can share their projects projects through the Scratch website galleries and projects pages. Projects can be downloaded and 'remixed' by other members of the community.

ScratchEd is an online community for educators to share their experiences using Scratch and any lesson plans, resources, projects or tutorials they have created.