This article will summarize a few milestones in computer networking history and Internet in particular. Special attention will be paid to:

Such a packet can travel from one device (computer) to another. Today, various higher level protocols exist to organize this transport (see Internet).

Licklider &Taylor (1968) wrote The Computer as a Communication Device. In this paper the authors argue that the computer's main role will be an interactor, i.e. a device that augments man-to-man communication, i.e. bring together distributed intellectual resources as online interactive communities. 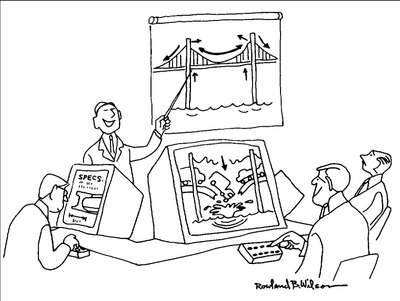 At a project meeting held through a computer, you can thumb through the speaker's primary data without interrupting him to substantiate or explain. (reproduced by permission of the Systems Research Center of Digital Equipment Corporation)

A communication system should make a positive contribution to the discovery and arousal of interests. (reproduced by permission of the Systems Research Center of Digital Equipment Corporation) 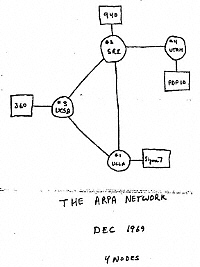 Drawing of the first ARPA Network

Early version of File transfer protocol (FTP), revised in 1980 and 1985. Still very popular. Since FTP is inherently insecure (not even passwords are encrypted), you might consider using safer alternatives like SFTP or SCP.

MOOs, a MUD variant that allows users to perform object oriented programming within the server, i.e. having the users participate in ultimately expanding and changing how the server behaves to everyone. MOOs became somewhat popular in the early nineties in education.

“Pick up your pen, mouse or favorite pointing device and press it on a reference in this document - perhaps to the author s name, or organization, or some related work. Suppose you are directly presented with the background material - other papers, the author s coordinates, the organization s address and its entire telephone directory. Suppose each of these documents has the same property of being linked to other original documents all over the world. You would have at your fingertips all you need to know about electronic publishing, high-energy physics or for that matter Asian culture. [....] (Tim Berners-Lee, et al (1992-94) World-Wide Web: The Information Universe)”

Q: What did you have in mind when you first developed the Web? (TBL FAQ) R: The dream behind the Web is of a common information space in which we communicate by sharing information. Its universality is essential: the fact that a hypertext link can point to anything, be it personal, local or global, be it draft or highly polished. There was a second part of the dream, too, dependent on the Web being so generally used that it became a realistic mirror (or in fact the primary embodiment) of the ways in which we work and play and socialize . That was that once the state of our interactions was on line, we could then use computers to help us analyze it, make sense of what we are doing, where we individually fit in, and how we can better work together.

W3 is a "distributed heterogeneous collaborative multimedia information system (WorldWide Web Seminar, 1993). Daniel K. Schneider was there getting information from the source. So this is an advertisement. At TECA we [teach] Internet technologies in education and use the WWW in our own teaching since 1993 :)

Ultima Online, was the first popular MMORPG in the western hemisphere

XML is born, a basis for standardization of Internet representation and communication formats.

“I think many, many more devices will be on the Internet - many of them household appliances, automobiles and personal digital assistants like the Palm Pilot and cell phones, pager, email agent and web browser. There will be new laws for doing business on the Internet, for moving funds and carrying out securities transactions. People will telecommute using the Internet and they will deliver information products and services through it. A lot of entertainment will be Internet-based including Internet-enabled group video games. Internet will be in our cars, planes, trains and in personal devices (like cell phones, pagers and personal digital assistants).”