Tutorial home page
Stitch Era embroidery software
Learning goals
Be able to import vector graphics or bitmap files
Be able to vectorize a bitmap file, i.e. turn it into a vector graphic
Be able to digitize a vector graphic
Prerequisites
Stitch Era embroidery software (in particular be able to create a new design).
Related pages
none
Materials
You can reuse the pictures. In the wiki, click on picture to make it larger, then click again and save it.
Quality and level
This text should technical people get going with Stitch Era. I use it for an optional master degree course in educational technology.
Last major update
September 2011. Since then some features e.g. file import was improved. Also the menu organization did change somewhat. We will try to fix this in some near future - Daniel K. Schneider (talk) 15:59, 17 August 2017 (CEST)
Next steps

Digitizing images is very difficult. Digitzing portrait images is a bit easier that digitizing landscapes. The basic principle is: 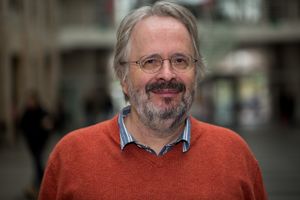 Before importing to Stitch Era, reduce the picture to a reasonable size, e.g. 1000px width using any picture manipulation tool. When importing a picture, Stitch Era will scale 100px will to 1cm in Stitch Era. I.e. a picture of 1500 x 1000px will become an embroidery of 15 x 10 cm, unless you scale or crop it within Stitch Era. Please note that 100:1 is not the standard conversion rate between cm and pixels on a low resolution screen.

We shall start with picture of myself since I do not want to be sued by angry people not liking their embroidery version....

Import the picture to Stitch Era (ARTWORK -> Open Image). As you can see in the screenshot below it will be adjusted to a size of 15cm x 10cm. 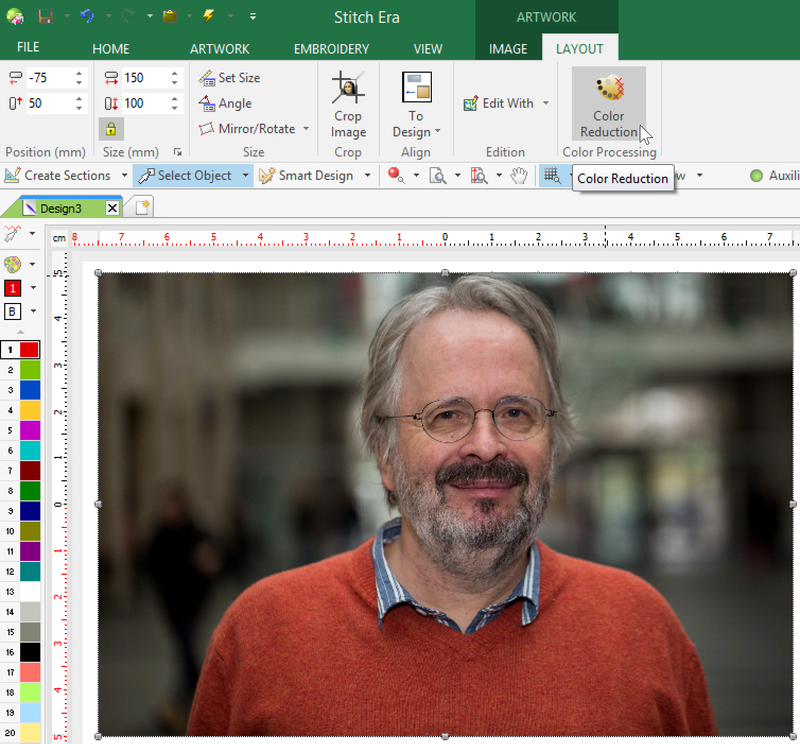 In a first step we suggest bringing out colors a bit. Increase both saturation and contrast a bit. This (optional) operation will hopefully make it easier to distinguish between certain features. To do so, select the picture in the workspace, then click on the IMAGE tab. 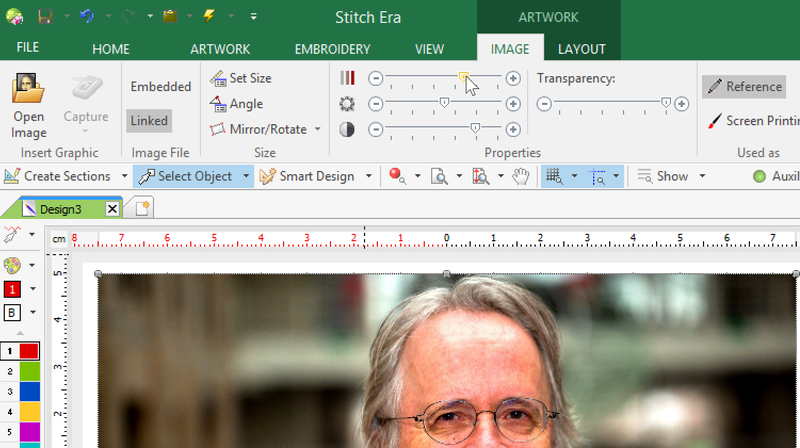 3.2 First round of color reduction and hole filling

Now we will engage in a first round to reduce colors. Select the picture, then open the LAYOUT tab. As you can see in the first screenshot (above), to the right there is a color reduction tool. Open it now. We will attempt two things: 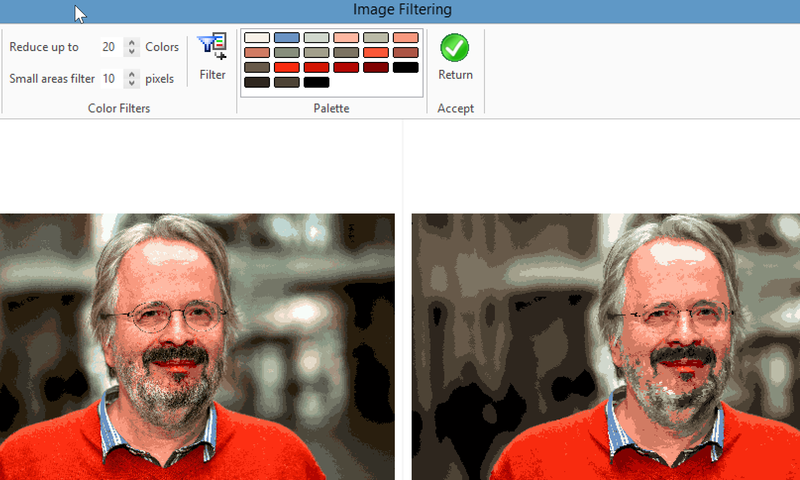 The vectorizer tool let us doign three thing in that order

As a general rule try to be as aggressive as you can in reducing colors, using little max error, high sharpness and larger min areas. Remember that embroidery can only do low resolution ! There is no point in keeping too much detail. The major difficulty is keeping essential features. If these are lost, also consider a bit of drawing.

In this step we will again reduce colors and remove small areas. However, instead of letting the machine reducing colors we will merge colors.

Click on the picture and open the Artwork/IMAGE tab. In the ribbon menu to the right click on Convert to Vector. In the Vectorizer tool that is now open, click on Filter (we already did reduced colors and remove holes). We now will attempt to reduce the 20 colors in the palette. Since there is no undo in this tool, you may have to restart more than once.

Now click on the Filter icon and you will see the "cleaned" result.

Now combine as many colors as you can. CTRL-click on at least two colors, then click on the Combine icon.

The following screen shot shows 9 colors left and much larger uniform areas. As you shall see below, we finally, after a first vectorising attempt, decided to adopt an eight color solution. 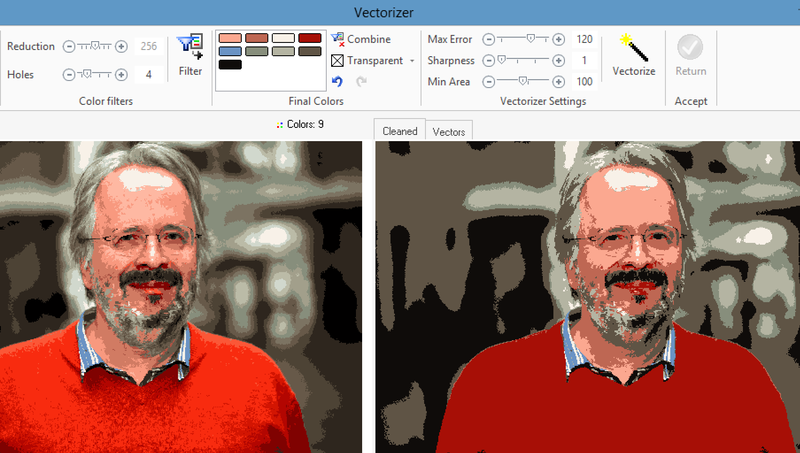 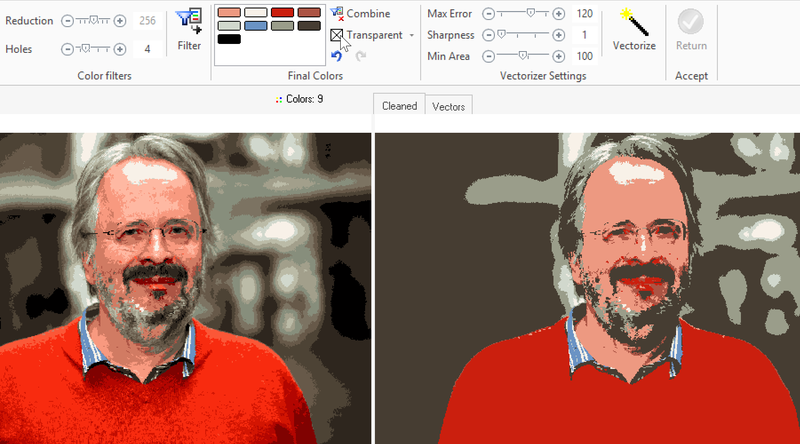 Now will have to vectorize which is also fairly tricky.

There are three parameters you could set. According to the manual (page 3-13):

Both max error and shaprness controls define the curvature degree that the vector will have. High values of these controls results in rounded outlines. If these items have small values, the trace of the vector-based figures will adjust to the outlines of the bitmap image.

Try the default values first and click on the Vectorize icon. This so-called tracing process will take a longer time (and a very long time if you did not reduce colors and holes as explained above). You can see the result in a Vector tab that is now open.

The following screen shot shows a result with max error = 150, sharpness = 10 and Min Area = 100. The result has over 25000 nodes which is quite a lot. Some of these can be taken away later by removing holes from vector objects. If you get over 10000 nodes like here, we suggest trying a solution with less max error, higher sharpness and bigger min areas.

The following solution will be easier to digitized. I only has 8 colors and about 9000 nodes. 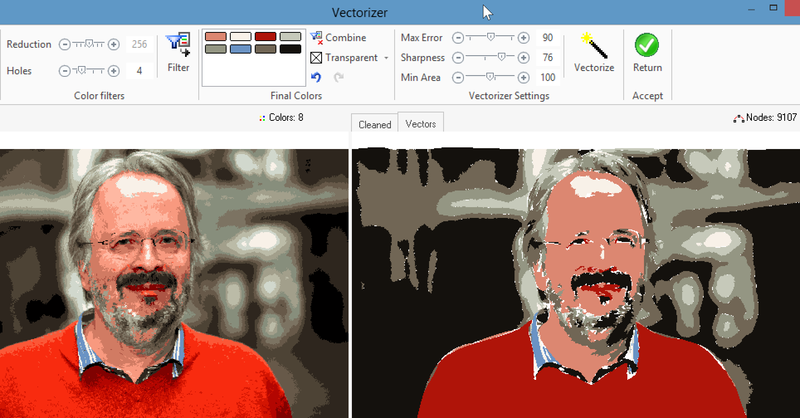 The next solution presents a very aggressive path reduction. It also uses the version with a nearly homogeneous background. I only has about 800 nodes and 39 vectors. 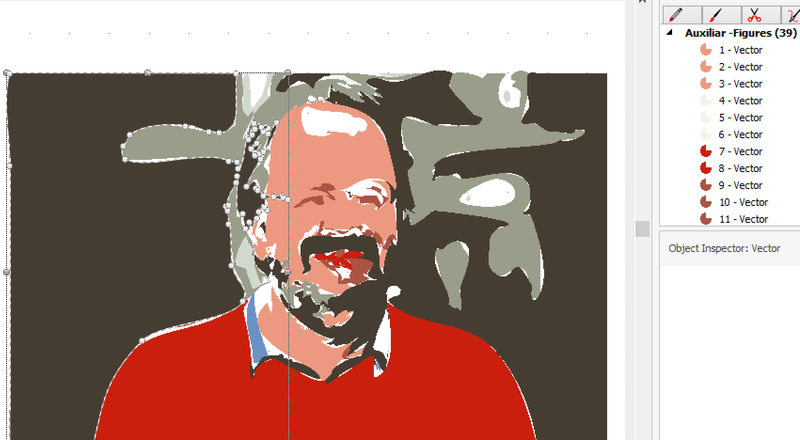 Once you are happy with the result, click on RETURN

Once back in the workspace you now can inspect and manipulate the vectors. Open the document map. When you click on an object in the screen the vector in the document section and the other way round will be selected.

Below we recall a few vector manipulation tricks. However, let us recall again, before you decide to spend hours fixing a complicated drawing, consider using a much more aggressive vectorization strategy. 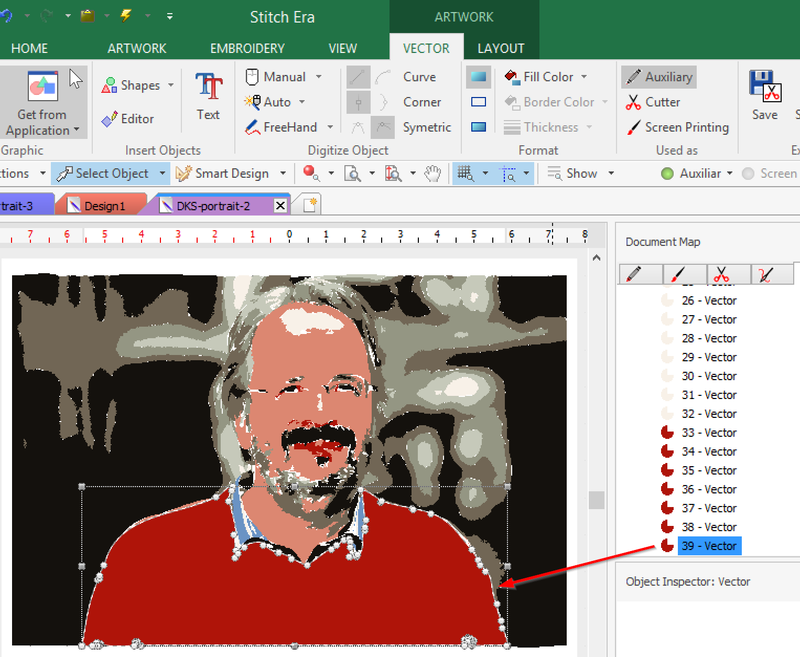 There are three methods to remove holes

Once you tried to remove some of the holes you also could decide to restart vectorizing. If you see several hundred s or thousands of vector objects in the Document manager consider restarting and using low max error, higher sharpness and higher min area.

(1) You now could start deleting most little objects if you plan to create a fairly smooth embroidery. The best way way to do this, is to go through the whole liste of 164 vectors and hit delete. This option will leave some tiny empty areas that you could fill later. 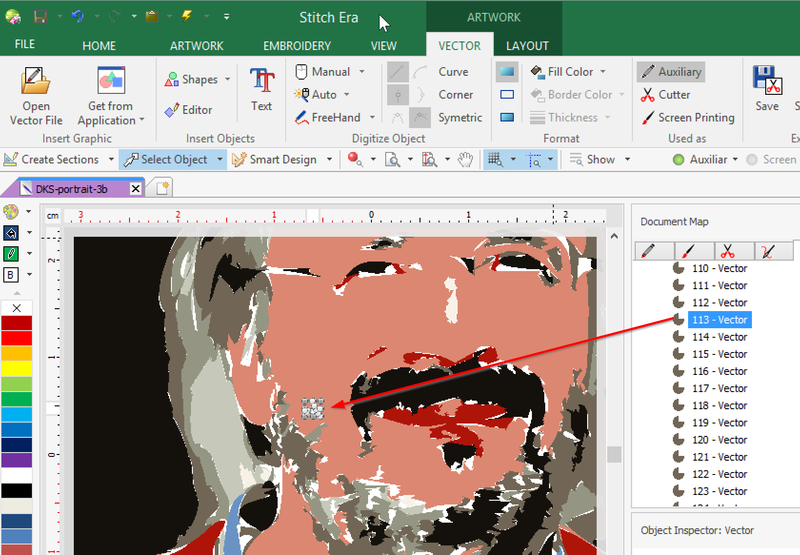 Portrait of DKS - Vectorizer tool - Click on each vector and remove if very small. 113 could be killed.

Another option is to merge vectors you want to remove with the larger surrounding one. Let's now remove the white area from my front by merging. 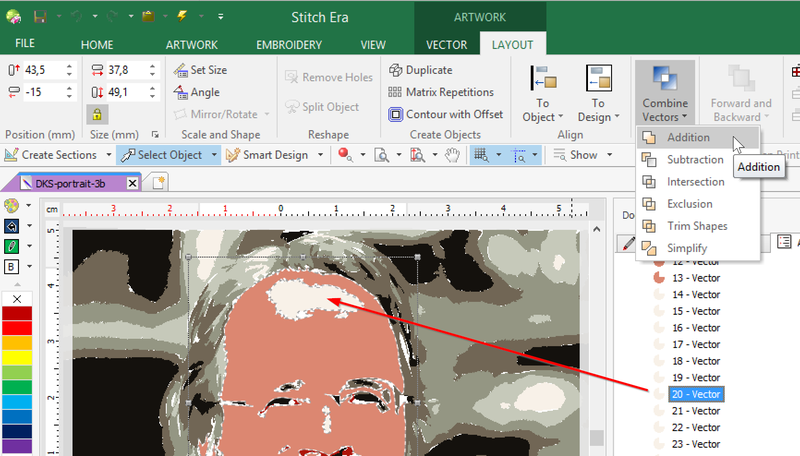 Now can do this with other similar areas. Learn how to use the zooming controls, in particular the SHIFT-F6 button.

(3) Remove holes with Remove Holes in the LAYOUT tab 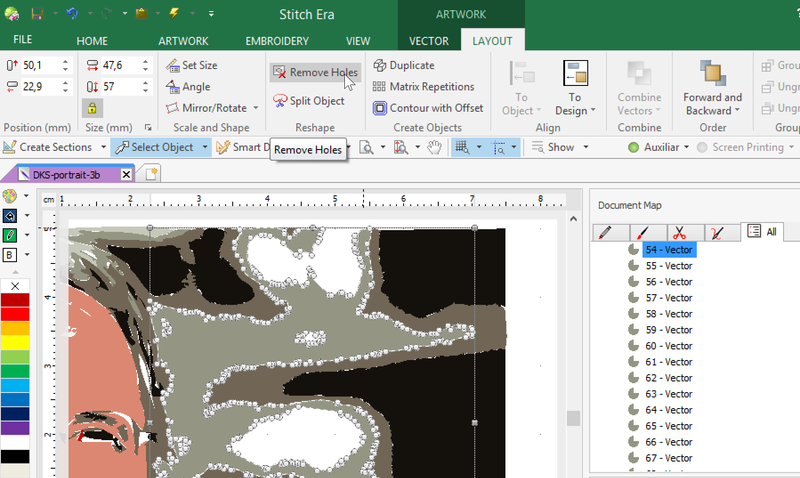 Trimming shapes means reducing the complexity of vectors, i.e. something that in principle you might have achieved before. The different is that now you can do this for individual vectors.

You can try trimming all the vectors, but the program is likely to crash:

As explained in the Stitch Era - vector graphics, one can manipulate vector shapes by deleting or adding points, by dragging points, and by dragging (pink) curve control points.

Three areas in particular should be enhanced: Mouth, eyes, eyebrows and maybe the nose.

Alternatively, kill shapes that are not good enough, e.g. eyes and eybrows and draw them (see below).

The moustache is connected with the beard. To smooth and fill holes it is easier with two objects. Select the object, draw a split line and finally right-click "Accept". If you did it right, you now have two objects. You can draw split "pathes" that are composed of several points, i.e. you could split an object along a complex path. 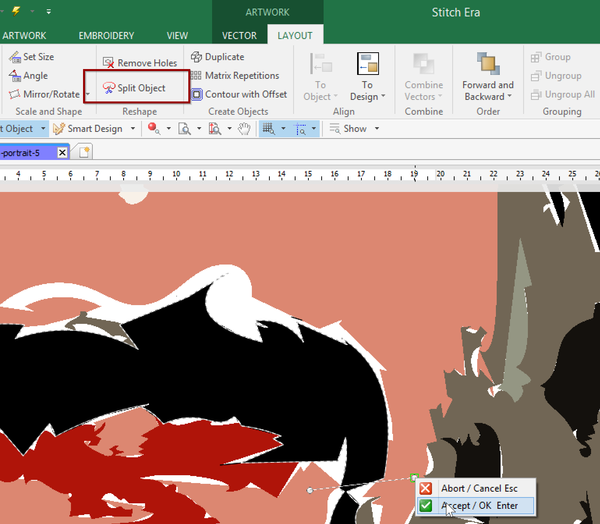 Some items have been lost during vectorizing, e.g. the glasses. I suggest redrawing these. Open a new design file and import the picture again (or else use an early version that you saved). The lock the picture in the Document map (right click menu).

To rebuild the glasses I used to ellipses from the Shapes menu and I drew 3 lines with the Free Hand tool using the Draw perfect objects option.

I also remade the mouth (rather badly I admit)

Once you are done, copy paste to the other design file.

Before you generate the embroidery, make sure to delete all tiny vectors and to simplify the others as much as you can. Below are two examples that are not pieces of art, but they both are digitizable.

Also save the file, since Stitch Era may hang up processing larger complex vector drawings. In particular, the software does not like vector objects that are not polygones, e.g. that have twisted lines. Therefore, again, simplify and smooth as much as you can. 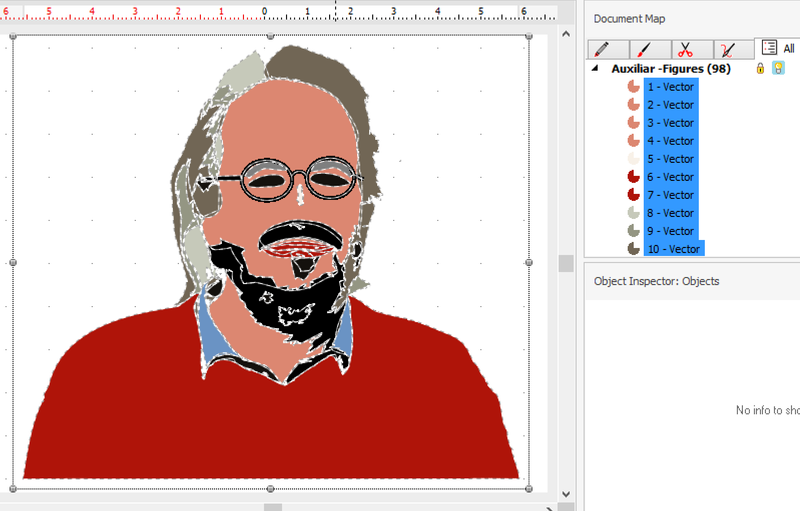 After a fair amount of cleaning and simplifying (take 1, about 2h of work) 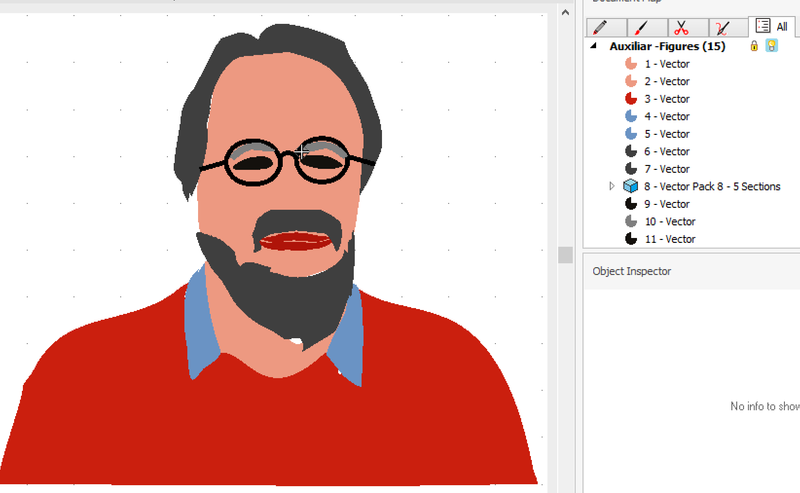 Without much cleaning and simplifying (take 2, about 1/4 of work)

One result (vector drawing area reduced to 6x5cm) is a very much simplified drawing. We removed all the background, removed all little vectors and filled holes. The result to right involved less cleaning and less simplifications. Maybe, some stitch section should be edited to use patterns instead of satin stitches.

Both solutions definitely do look unfriendlier than the original picture. We certainly should redraw the mouth for example ....

In conclusion, we can say that digitizing portrait pictures is not too difficult, but since the procedure requires some redrawing and since we merged many vectors the result is artistically speaking, not very convincing.