“The Semantic Web is a project that intends to create a universal medium for information exchange by putting documents with computer-processable meaning (semantics) on the World Wide Web.” Wikipedia: Semantic Web

The idea central to the semantic web is that power comes from putting together a variety of islands of knowledge that pre-existed, linking them together.

This section needs updating as of Feb 2020 !

People who work on the Semantic Web base their work on some kind of "semantic web tower". This usually take the form of a graph that captures all the different layers that the semantic web is made of: 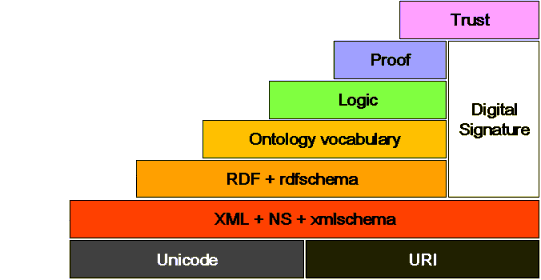 The core technologies are:

To start with, they don’t require a priori fully structured representation of the knowledge like relational database. They are designed to cope with semi-structured types of knowledge.

RDF+OWL are designed to live in an open and distributed environment.

If you take OWL, for instance, it is grounded into URI (Uniform Resource Identifier). This means that anywhere within your knowledge tree, you put a URI as content of a node. Rather than give a definition of a term or clone the definition form elsewhere like you would be forced to do in a relational database, you can simply refer to some knowledge that is held elsewhere (and eventually kept up to date on that other site). The big distinction then to make is between the URL that corresponds to the usual web page model which can link to a web page like the one of the Guardian (a newspaper in the UK) where the information is susceptible to change everyday and a URI to be used in a knowledge tree. In the second context, the URI doesn’t let you retrieve information content per se but information about where that information content is to be found. An important implication of this is of course that the URI for this second type of resource (pointer to the information content) has to remain persistent for it to be useful to link to it.

Ontologies allow for web-like relationships between data, which is not easily done in a typical relational database. This corresponds to a point he made 3 time during the talk. The general idea being that links on the web have some parallel with links in the real world.

Web 2.0 does incorporate some "semantics" but globally speaking it is much inspired by making it as simple as possible. E.g. Web 2.0 uses

In other words, Web 2.0 is not very smart, but it brought back people into the network (as planned some 40 years ago by Licklider and Taylor).

There are some interesting initiatives to make the current web smarter without using "heavy" semantic web technology. E.g. microformats, semantic XHTML. Other initiatives, like RDFa try to build a bridge between "pure" RDF and XHTML.

“Web 3.0 is a term that is used to describe various evolution of Web usage and interaction along several paths. These include transforming the Web into a database, a move towards making content accessible by multiple non-browser applications, the leveraging of artificial intelligence technologies, the Semantic web, the Geospatial Web,[citation needed] or the 3D web.” (Source: Web 3.0 @ wikipedia, last accessed Nov 17, 2007)

Semantic Web is "heavy". As of 2020 it still requires some programming skills. However, some functionality can be use by any digitally literate person, e.g. semantic mediawiki or Metadata schemes for contents.

Alternatives to the "official" vision of the semantic web are light-weight initiatives using the lowercase semantic web or "real world semantics" metaphor and that can be found in: