Land art (or Earth art) refers to an art movement in which landscape and art is linked, i.e. art work is not just placed in nature, but draws from nature. According to Wikipedia (retrieved 17:20, 21 September 2009 (UTC)), “Land art, Earthworks, or Earth art is an art movement which emerged in the United States in the late 1960s and early 1970s, in which landscape and the work of art are inextricably linked. Sculptures are not placed in the landscape; rather the landscape is the very means of their creation. The works frequently exist in the open, located well away from civilization, left to change and erode under natural conditions. Many of the first works, created in the deserts of Nevada, New Mexico, Utah or Arizona were ephemeral in nature and now only exist as video recordings or photographic documents.”

Today, land art seems to refer to a whole family of productions and is tied to other artistic movements. Land art can refer to several interpretations that may be combined:

A related movement is environmental art. According to Wikipedia, “the term Environmental Art is used in two different senses. [(1)]The term can be used generally to refer to art dealing with ecological issues and/or the natural, such as the formal, the political, the historical, or the social context. [(2)] It is possible to trace the growth of environmental art as a 'movement', beginning in the late 1960s or the 1970s. In its early phases it was most associated with sculpture — especially Site-specific art, Land art and Arte povera — having arisen out of mounting criticism of traditional sculptural forms and practices which were increasingly seen as outmoded and potentially out of harmony with the natural environment. The category now encompasses many media. Recently Sustainable art has emerged as an alternative term to environmental or green art, in recognition of the challenges that sustainability brings for contemporary art as a whole.” (Environmental art, Wikipedia, retrieved 17:20, 21 September 2009 (UTC)).

Most dedicated land artists such as Andy Goldsworthy pay attention to cause no harm to nature. Site-specific art such as Christo's should not be considered land art.

Land art can also refer to garden construction (i.e. mazes and other "sculptures" made with plants). However, we believe that only quite "natural" gardens, i.e. not the french-style formal gardens, could be considered as "land art". Finally, there is also talk about "land art" in virtual environments, e.g. Land Art in Second Life.

A divider - Materials: fern on a mountain road 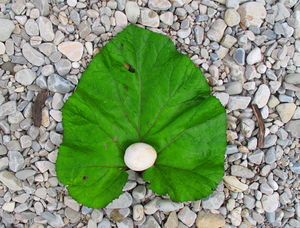 Of course, land art can be a cool subject for an art class. A more challenging idea is to combine artistic productions with learning other subjects.

“It is common to introduce works of art into lessons in primary and secondary schools in order to mediate ideas and theories about subjective realities. Pictures, sculptures, installations are understood to represent insights and imagination, or illustrate shared realities. In this paper we interpret art works as translations of subjective intentions, even theories, in particular experiential settings. An art-work or artistic action that emphasizes its object character as a central theme is especially open to this kind of interpretation. It can serve to generate theories revealed through the senses. In principle, art could be used in schools whenever interdependencies and contexts are the learning focus. In order to show this approach is not dependent on the age range of pupils, this paper offers two practical examples. One took place in the eighth grade of a secondary school, one in the third grade of a primary school.” ((Doing) art as an interdisciplinary didactic principle by Anja Kraus (2008).

After a quick search on the web, we found a few examples that address mostly social and environmental issues. But we think that the potential of landart is fairly unlimited with respect to subject areas and its function in pedagogical scenrios.

A nice example was the Central European Land Art Contest (Flickr page), organized by 350.org Global Climate Movement and Messzelato Association, a land art and climate protection contes for children between the age of 11-18 within non-formal youth groups or school classes in the region of Central and Eastern Europe.

Another example funded by the EU Comenius project can be seen in this PDF portfolio that demonstrates art made by children in a "land art day" about Identity, Feelings, Friendship, Reality, Conflict and Love.

An other interesting example is a borderline land/ecology art project from Saudi Arabia, the Land Art Generator Initiative, that aims to design and construct Land Art / Environmental Art installations in the United Arab Emirates that have the added benefit of large scale clean energy generation.

See also the writing section below. 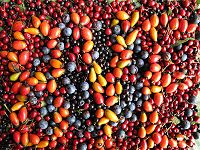 Identify plants that are being used. In the picture to the right, you can find "fruit" collected in September. One is not edible, one is edible and tasty (the rose hip). The other two are edible but got bad taste ...

Mosaics are probably very easy to create with children...

Identify rocks that are being used and the geological history of the site.

For example, the following materials (sand and some sort of Limestone) can be found in a river of the Jura mountains (read the Geology part). The site is the about here (I hope). The educational question could be: Where does Limestone come from, i.e. what is sedimentary rock. 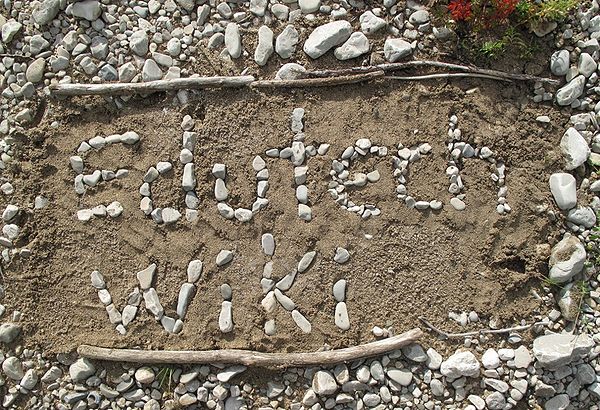 Edutechwiki - Materials: stones on a patch of sand

Since land art is most often ephemeral, it becomes art through the camera. Most images need to processed in one way or another. Some pictures may be modified in a way that could be called "augmented land art".

E.g. with a pile of stones one can teach object selection techniques with advanced image processing software like Photoshop. Coloring a stone requires students to learn how to use the Magnetic lasso tool (or similar) plus path manipulation tools. In addition, he/she should understand layers a bit and finally, color manipulation (see below).

The following picture is from the floor of my office - just joking, it's a "mosaic transform" of above's limestone in sand picture after adding some contrast, saturation and a change of hue toward the red. Basically such "easy" transforms can be used to introduce Hue-Saturation-Value (HSV/HSB) and Hue-Saturation-Lightness (HSL) color models. 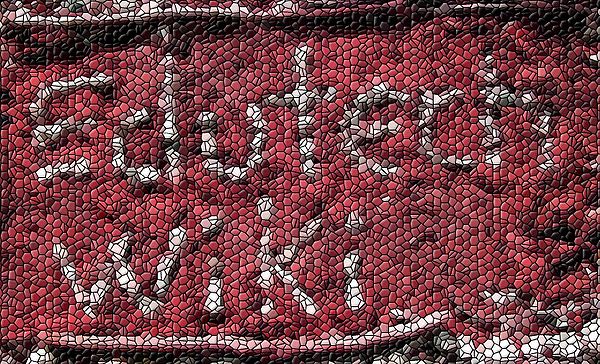 Edutechwiki - Materials: stones on a patch of sand - Hue and saturation transformed with Gimp

Now such transforms may be used to teach about color palettes in web design. As explained in the computer colors tutorial, some authors refer to "nature", e.g. summer, autumn, winter, spring colors or referring to specific kinds of landscapes. Some kinds of palettes that can be designed and tested with a tool like Color Scheme Designer, in particular monochromatic and analogical palettes, also can be found in nature. E.g. the picture made with moss and fern shown on top includes a limited set of close colors as the same mosaic transform to the left shows.

Most designers prefer pale palettes (at least in the last few years). Stone has that, as the following sequence shows. If you think that stone is too "grey", then just saturate the colors to a maximum :)

Images then can be processed with color palette generation software. E.g. Adobe Kuler allows to create five-color palettes from an uploaded picture. Below is a screenshot made from the mosaic-distorted pictures shown above. 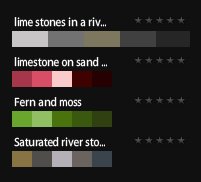 Finally, a tool like Palettefx.com allows to extract most different colors as the following picture shows:

As the Central European Land Art Contest show, art work might be used to engage students in writing, although most of the texts associated with pictures probably has been written by teachers...

In the Russia_No land creation made with beach sand and stones, you can read:

One the most important consecutives of the global warming is melting the ice on the Polar Regions and raising the sea level. The place where school is located can be called Russian Holland (only dam is protecting the land form the sea). Therefore any sea level raising is extremely important for our territory. After the lesson we decide to attract public opinion to this problem on the coastal zone. We choose very popular beach of the Baltic Sea and by using the stones we showed people that if we will not change the life style country after country will be cover by water. More than 500 peoples were able to see our land art pieces.

This writing also could be analyzed in terms of motivational issues.

Art work by Daniel K. Schneider. I don't feel that it's great, but it was fun and the pictures are probably good enough (and copyright free) to illustrate a few points, e.g. how to use land art in web technology teaching.

Some background information about the pictures shown 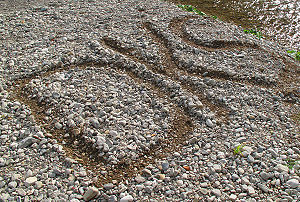 In sept. 2009 I went for a land art weekend with colleagues of my wife. Saturday morning I spent a lot of time making the snake (and I took lots of pictures of its variants, e.g. I started off with a thin green line that divides a mountain road). I then made the EduTechWiki logo with fern. The tricky thing was to have it stick on a near vertical surface, but it was made in about 10 minutes. In the afternoon we spent some time near a river. I created yet another EduTechWiki logo and then made some other quick stuff like the "W". The nicest piece (IMHO) was the egg on leave (took me less than a minute) and then I went putting a white stone into the art work of others (lattice and coal work plus others not shown here). On Sunday morning I wasn't inspired, collected berries and assembled them in various ways. The "bye" icon was my final go at land art. Picture taking and processing is also part of land art. Since I am not a photographer, I just put the camera in automatic mode (most of the time). You can see that looking at the exif information by clicking on each picture. Should have taken the Flash off I think. Then I did a little bit of image processing (mostly just cropping and size reduction, but also a bit of color manipulation, e.e. changing global H/S/L values).