In Flash CS3 there are several built-in special effect features.

Some of these effects may be very demanding on your CPU. Try to work with simpler objects or space out generated keyframes if this happens.

Timeline effects are effects that are automatically generated by the Flash environment from an object. You only can parameterize these effects, but not hand-edit generated objects and frames !

Summary of the procedure

Step 1 - Select an object and open the effects tool

There are three sub-menus for effects:

For each of these effects you can set certain parameters, in particular:

Important: Using the special effects means that you can not change anything Flash will generate. Also, do not make modifications to the object. Flash will:

If you want to remove an effect, it is best to Right-click->Remove on an object ! You also can delete all the generated objects, but this is more work and you may by mistake delete something else ....

An example with timeline effects 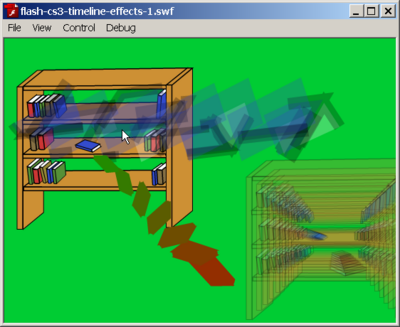 (1) Distributed duplicate (tumbling): An object will tumble and be reproduced with X copies. You may set several parameters like:

(2) Blur: Motion blur that may include change of alpha, position or scale of an object

To edit create special effects animation, you will work with a tool available from the Time-line effects menu. Below we show a screenshot of "Distributed duplicate". You then have to play with the parameters until you get it right. Remember that you cannot make any changes to the object or the generated objects!

The only way you can change an effect is through the edit effects tools. There are two methods:

This way you also can remove an effect.

An other example that uses tumbling is this "enhanced" video.

Filters are shortly introduced in the Flash colors tutorial. They just will wrap around the object, i.e. can be animated in a motion tween for example.

Look at the options in the parameter panel when you do a "normal" motion or shape tween and play with these ...