This entry is part of the Flash tutorials.

Buttons are interactive interface elements on which a user can click for example. As an alternative you also can use component buttons (see the Flash components tutorial.

Learning goals
Learn how to use built-in buttons (from library buttons.fla).
Learn how to create your own buttons.
Learn a little bit of ActionScript 2 to jump around in the timeline.
Applications: Simple Flash web sites, e.g. slide shows.

Moving on
The Flash article has a list of other tutorials.
We suggest e.g. the Flash components tutorial (working with component buttons is actually easier, but choice is limited).

A word of warning

In this tutorial we only will cover ActionScript 2 programming elements. Read the Flash button tutorial if you are interested in modern Flash programming.

If you lack any sort of programming experience, then download the source files I made and play with them, e.g. add an extra picture and fix the code if needed...

Flash contains a good variety of pre-built buttons. To use these, your first should dock the Library-Buttons.fla panel next to your libraries panel: Menu Window->Common Libraries->Buttons. (See the Flash CS3 desktop tutorial on how to dock a panel).

In this section we will just introduce a few concepts, no real use.

Buttons are arranged in folders, double click to open these. Then, you may may inspect various symbols by clicking a button. In the upper part of the panel you get a preview. Click on the arrow to see how it behaves.

For use in your own animation I suggest to copy a button first to your own library. This way you can find the button again easily and you also can modify its features.

From your library panel simply drag the button on the stage. This will create an instance of the button. To remove it from the stage, select it and hit the delete key. Make sure you operate with instances in your flash animation (not symbols themselves). If you did this right, you will see in the properties panel something like Instance of: rounded orange.

To customize a button symbol, double-click on the icon of the symbol library panel. This will let you work just on this object, i.e. it puts you into a Symbol editing mode. There are other ways to get into this editing "inside" (via the general menu or double-click or right-click on an instance).

You now could for instance change the font or the color of a symbol or make changes to its frame-by-frame animations. Anyhow, we suggest to leave the buttons as is for the moment.

There are several solutions:

As you can see in the picture below, on the Edit Bar from left to right you can see the cascade of editing levels. Right now we are editing the "bubble to red" button.

Editing the label of a button

While you can use these buttons "as is" (except making them larger or smaller maybe), you only need to know how to insert a label for starters.

A symbol is basically something that you can use several times over, but its fundamental look and feel properties will remain the same, including its the label. So if you need buttons with other labels you must create copies of these symbols. In your library panel right-click on the icon of the symbol and select duplicate from the popup menu. Choose an appropriate name, e.g. "do not press"

To change the label (and font) of a button symbol:

The four frames and the button layers

Up
The button, i.e. the drawing that appears "as is" when a frame is displayed in your animation.

Over
The button graphics as it appears when the user moves the mouse over it. E.g. it defines highlighting.

Down
The button as it appears when the user presses the mouse (just during the time the mouse button is held). It shows the clicking effect.

Hit
This frame allows to define the sensible area (usually the complete button).

Various kinds of buttons have various layers (usually between three and five) depending on the complexity of the drawings. These layers contains just drawing for these four button frames. The Flash engine will then select the appropriate frame according to user action (mouse over, mouse down, etc.).

Beginners just should use built-in buttons. There is no need to change anything in the keyframes or the layers except the label. However, you can change any drawings you like. A button can be made of any sort of graphics you like (even pictures as you shall learn below).

You can attach behaviors in various ways to buttons. The most obvious one is to jump to some frame in the animation when user clicks on a button. (More other tutorials).

In the next section we will use a button to launch a rocket.

The goal is make a flash animation that stops at frame one when the file loads. The user then will see a button on which he click. The result is that animation will restart in frame 2.

Alternatively you just could have imported a rocket as *.swf, e.g. flash-cs3-rocket.swf. But importing the rocket as symbol will allow us to edit the rocket in this file in case we are not happy with it.

You should have something like in the screen capture below. You also can see the transform panel I used to adjust size + rotation. 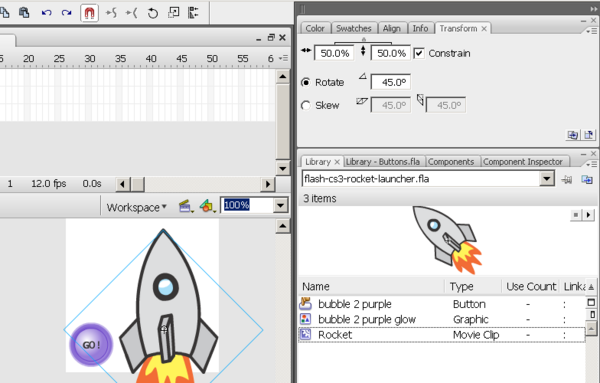 Step 7 - Stop the animation at start

What that means is that Flash will move to frame 2 (of the current scene) and play it and the rest ... Your timeline finally should look like this:

Timeline for the rocket launcher animation

You can build little flash "web" sites with buttons with what you just learned. The principle is simple:

With ActionScript 2 you could attach behaviors to buttons (as describe with the rocket launcher) or also script in the timeline. Learn how to do the latter, since migration to AS3 will then be easier.

If you compare this to the AS3 way examplained in the Flash button tutorial you can see that AS 2 code is simpler.

A simple slide show with your own buttons

We will first show how to create your own simple buttons. Then we show some ActionScript code that demoes how to make a simple slide show with only two buttons (forward/backward) and that extend throughout the animation. Purpose of this application is again to explain buttons and some Action Script, not to make the perfect slide show tool.

This version is more or less the same as the AS 3 version presented in the Flash button tutorial. But the ActionScript code is different. First, we will import the pictures and adjust the stage. This way we we can get a feel for the size of buttons needed. Then we draw the buttons. Finally we will make it interactive.

A timeline with several picture frames

Step 4 - Draw a forward, a home and a backward button

Step 5 - convert these graphics into to symbols

Turn a graphic into a button symbol

So now you should have something like 2 button symbols in the library and an instance of each on the stage.

The workspace, i.e. the Actions-Button panel should look like this:

Tip: If is doesn't work, make sure that your Publish settings say ActionScript 2. I won't work with ActionScript 3.

This is ActionScript code that will stop the animation right after frame one is loaded. Only by clicking the buttons can the user then go forward or backward.

Finally, make sure that these buttons are displayed throughout the "movie"

The final time line for a simple slideshow

You may want to fix the title page.

You can make image maps from bitmaps too. I.e. you could use a picture and then insert "hot spots".

Steps (more details when I have time):

Carve out a fragment

ActionScript 2 and 3 are different but for each you should give a name to your buttons in the properties panel.

You can directly attach behavior to buttons. Select a button and hit F9. Then, insert some code like:

What that means is the following: As soon as the user releases the mouse, the playhead will jump to frame N and either stop there or play the rest of timeline.

ActionScript 2 with AS 3 style

Alternatively, you can also script in the timeline like this:

Replace btn_name by the name of your button (to set in the properties panel). Use this method if you later plan to migrate to AS 3 (see below)

If you search the Internet you can find lots of Flash slide shows. Some commercial, some tutorials, some good, some outdated. Here are a few: