“Inquiry learning is not about memorizing facts - it is about formulation questions and finding appropriate resolutions to questions and issues. Inquiry can be a complex undertaking and it therefore requires dedicated instructional design and support to facilitate that students experience the excitement of solving a task or problem on their own. Carefully designed inquiry learning environments can assist students in the process of transforming information and data into useful knowledge” (Computer Supported Inquiry Learning, retrieved 18:31, 28 June 2007 (MEST).

Inquiry-based learning is often described as a cycle or a spiral, which implies formulation of a question, investigation, creation of a solution or an appropriate response, discussion and reflexion in connexion with results (Bishop et al., 2004). IBL is a student-centered and student-lead process. The purpose is to engage the student in active learning, ideally based on their own questions. Learning activities are organized in a cyclic way, independently of the subject. Each question leads to the creation of new ideas and other questions.

This learning process by exploration of the natural or the constructed/social world leads the learner to questions and discoveries in the seeking of new understandings. With this pedagogic strategy, children learn science by doing it (Aubé & David,2003). The main goal is conceptual change.

IBL is a socio-constructivist design because of collaborative work within which the student finds resources, uses tools and resources produced by inquiry partners. Thus, the student make progress by work-sharing, talking and building on everyone's work.

There are many models described in the literature. We shall present as an example the cyclic inquiry model of "Chip" Bruce's What is inquiry-based learning?. The model was originally hosted at University of Illinois at Urbana-Champaign (UIUC) (and some links below needed fixing ....)

The purpose of the UIUC inquiry model is the creation of new ideas and concepts, and their spreading in the classroom.

The Inquiry cycle is a process which engages students to ask and answer questions on the basis of collected information and which should lead to the creation of new ideas and concepts. The activity often finishes by the creation of a document which tries to answer the initial questions.

The cycle of inquiry has 5 global steps: Ask, Investigate, Create, Discuss and Reflect. We will give an example for each step using the "rainbow" example from Villavicencio (2000) who works on light and colors every year with 4 or 5 years old children.

from: [The Inquiry Page]

During the preparation of the activity, teachers have to think about how many cycles to do, how to end the activity (at the Ask step): when/how to rephrase questions or answer them and express followup questions.

This step focuses on a problem or a question that students begin to define. These questions are redefined again and again during the cycle. Step's borders are blurred: a step is never completely left when the student begins the next one.

Rainbow Scenario : The teacher gives some mirrors to the children, so they can play with the sunlight which are passing trough the classroom's windows. With these manipulations, students can then formulate some questions about light and colors.

Ask naturally leads to Investigate which should exploit initial curiosity and lead to seek and create information. Students or groups of students collect information, study, collect and exploit resources, experiment, look, interview, draw,... They already can redefine "the question", make it clearer or take another direction. Investigate is a self-motivating process totally owned by the active student.

Rainbow Scenario : Once questions have been asked, the teacher gives to the children some prisms which allow to bend the light and a Round Light Source (RLS), a big cylindrical lamp with four colored windows through a light ray can pass. Then the children can mix the colors and see the result of their mixed ray light on a screen. They begin to collect information...

Collected information begins to merge. Student start making links. Here, ability to synthesize meaning is the spark which creates new knowledge. Student may generate new thoughts, ideas and theories that are not directly inspired by their own experience. They write them down in some kind of report.

Rainbow Scenario : Some links are created from collected information and children understand that rainbows have to be created by this kind of phenomenon.

At this point, students share their ideas with each other, and ask others about their own experiences and investigations. Such knowledge-sharing is a community process of construction and they begin to understand the meaning of their investigation. Comparing notes, discussing conclusions and sharing experiences are some examples of this active process.

Rainbow Scenario : children often and spontaneously sit around the RLS. They discuss and share their newly acquired knowledge with the purpose to understand the mix of colors. Then, they are invited to share their findings with the rest of the class, while the teacher takes notes on the blackboard.

This step consists in taking time to look back. Think again about the initial question, the path taken, and the actual conclusions. Student look back and maybe take some new decisions: "Has a solution been found ?", "did new questions appear?", "What could they ask now ?",...

Rainbow Scenario : teacher and students take time to look back at the concepts encountered during the earlier steps of the activity. They try to synthesize and to engage further planning on the basis of their recently acquired concepts.

Once the first cycle is over, students are back the Ask step and they can choose between two options:

Rainbow Scenario : the teacher sets students free to repeat their experiments or to try different things. Some students try to replicate what their friends have done, others do the same things with or without variants. A new cycle begins.

The advantage of this model is that it can be applied with lots of student types and lots of matters. Moreover, the teacher can design the scenario by focusing on a part of the cycle or another. He can use one, few or more cycle. Most often, a single cycle (formal or not) is not enough and because of that, this model is often drawn in a spiral shape.

“There is usually a strong caution against interpreting steps in the cycle as all being necessary or in a rigid order. In fact, inquiry learning is less well characterized by a series of steps for learning than it is by situated learning (Lave & Wenger, 1991). This is a phrase describing how learning happens as a function of the activity, context and culture in which it occurs, rather than through abstract and decontextualized presentations. People thus learn through their participation in a community of practice. Learning is a process of moving from the periphery of a community to its center, that is, going from legitimate peripheral participation to full enculturatation. Most of this process is incidental rather than deliberate.” (What is inquiry-based learning? (12/2014).

Garrison, Anderson & Archer (1999) presented a model that is based on Dewey's concept of practical inquiry. “The reflective phases of practical inquiry or critical thinking presented here are grounded in the pre- and post-reflective phases of the world of practice. The two axes that structure the model are action–deliberation and perception–conception. The first axis is reflection on practice. The second axis is the assimilation of information and the construction of meaning. Together, they constitute the shared and personal worlds. The quadrants reflect the logical or idealized sequence of practical inquiry (i.e., critical thinking) and correspond to the proposed categories of cognitive presence indicators.” 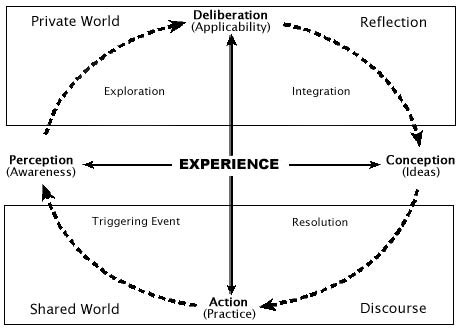 Pedaste et al. created a five components model based on a systematic review of 32 selected articles on inquiry learning that defined inquiry phases and cycles. The review process firstly resulted in a list of 109 terms for inquiry phases, that were reduced to 34 terms, merged into 11 phases. “Orientation, Questioning, Hypothesis Generation, Planning, Observation, Investigation, Analysis, Conclusion, Discussion, Communication, and Reflection. However, it was not practical to retain 11 phases, because inquiry-based learning is often referred as a complex and difficult learning process for the learners (de Jong, van Joolingen, 1998, Veermans et al, 2006)” (Pedaste et al., 2015). These eleven phases then were organized into groups, also called "general phases": Orientation, Conceptualization, Investigation, Conclusion, and Discussion. Some of these include sub-phases as shown in the table below.

The model we presented above represents probably the dominant view of inquiry learning. It combines more radical open-ended socio-constructivist principles (Discovery learning) with a model of guidance. As opposed to Learning by design, most inquiry-based models do advocate opportunistic (i.e. adaptive) planning by the teacher. Other models include

There are also microworlds and computer simulation environments that support inquire learning. A good example is represented by the CoReflect/Stochasmos project and tools.