“Flint is an open-source project to create a versatile particle system in ActionScript 3. The aim is to create a system that handles the common functionality for all particle systems, has methods for common particle behaviour, and lets developers extend it easily with their own custom behaviours without needing to touch the core code. ([1])”. That may sound very technical and it actually is. Such libraries are meant primarily for "real" ActionScript programmers. However, Flash designers with a little bit of ActionScript programming know-how can also use such code. In particular, they simply may slightly adapt the excellent examples that are for download.

Flint is developed by Richard Lord and is released under the free open source MIT licence.

Firstly have a look at what this particle system can do. Cool isn't it ?

Step 2 - You may install it into the Flash Components directory, e.g. for CS4/Vista:

Open CS4 again, your components panel now should include the Flint classes. This is probably a dumb thing to do, but the advantage is that you can remember that you have these libraries and where ;) Anyhow, putting these files there, will not change a thing with respect to the next step .....

Skip this step if you took the *.swc files !

Get a zip file of FliNT source from http://flintparticles.org/. took:

You also may download extra stuff, i.e. documentation and examples (both can be found in the same place)

Dezip these three archives in a new directory.

Now since we are interested in snowflakes were are actually really lucky. There is both example code (in the example zip file) and a nice Introducing Flint with a snow effect tutorial made by Richard Lord the author of the Flint system.

You might want snowflakes. Creating a nice snowing animation with lots of snowflakes by drawings would be very tedious and programming them yourself is a bit difficult (unless you are a "real" programmer). You now have two options:

Step 0 - Fix the Classpath in Flash 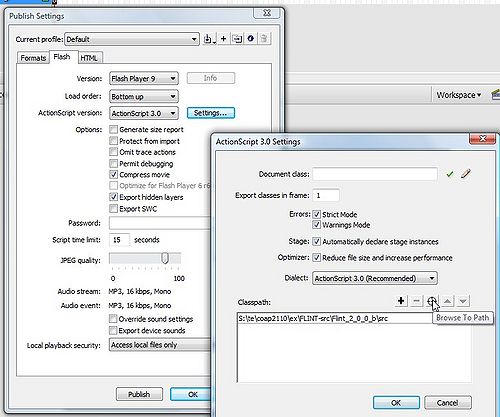 Setting the classpath in Flash CS3

In these ActionScript 3.0 settings, you then have to add the name of the subdirectory where the flint system sits.

Basically, what you have to understand at this point is that your application has to know in which directory to look for the FliNT code. The "org" subdirectory of the source code version must be a direct sub-directory of the classpath directory you just defined. If you want to understand more about packages and classes you'll have to dig fairly deeply into ActionScript programming, something we will not do here ...

Step 1 - Create a frame for which you want snowfall.

Personally, I'd like to have some snow in my Office as you can see in our own version. So firstly we need to import a picture. I made the orginal much darker with higher contrasts in order to be able to see the snowflakes. It may be too dark on your screen, but on my DELL M1730 laptop it looks just fine.

That was really easy. We just took the code from the Flint_2_0_0_b_examples.zip archive and made 2 little modifications. We only use a single background and commented out 2 lines. Also, we changed two parameters since our picture is a bit bigger.

then you most likely got your classpath definition wrong. See above !

If it isn't snowing all over your picture, then you will have to adjust 2 lines in the AS3 code. Figure it out yourself by looking at our inserted comments in the AS code above. Also you should get the DeathZone right. This is a hidden area underneath the picture where the falling down flakes are killed.

Get the flint-snowflakes.fla file from the following places. But please recall that you will have to set the classpath (aka source-path) for the FLiNT library. It will not work "as is" !

There is no difference between CS3 and CS4 versions, except that one can't open CS4 files in CS3.

Want to understand a bit more ?

Read the Introducing Flint with a snow effect tutorial made by Richard Lord.

Our only contribution was to add some explanations on how to define a classpath, i.e. the very basics about how to reuse such an example and which R.L. doesn't explain (since he made this library for programmers and not designers in the first place).

Something else you can with this particle system is to create burning Logos, e.g. something that symbolizes how hot the master program you should join is.

The example below is just a adaptation of the example distributed in the Downloads. You also can look at the maybe different online version of the burning Flint Logo.

To create your own burning logo you need two things:

Step 1 - Import logo and the fireblob to your library

You now should have a setup that looks like this (minus the fire log which we shall create below). Enlarge the picture below if you can't make out the details. 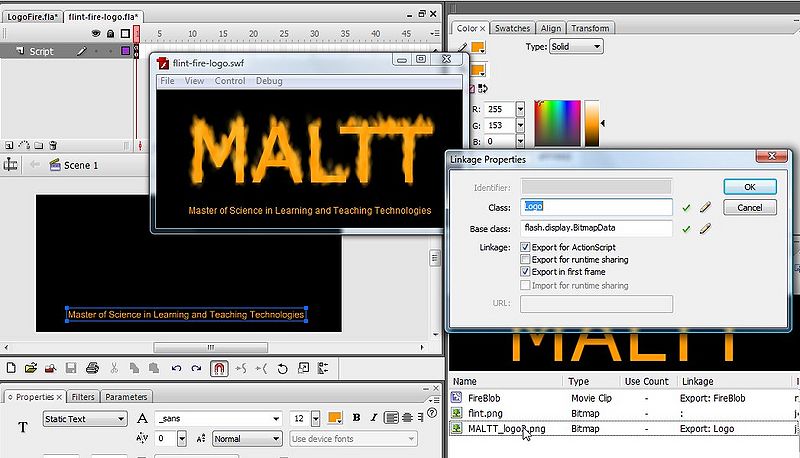 Step 3 - Copy some ActionScript code and make a few adjustments

You then have to make adjustments where I inserted comments:

Step 4 - Admire the result and play with the source code

Maybe you may rather want to demonstrate how burning cool your institutions is. All you need to do is make a Logo in blue and then change a line in the AS3 code.

To change the color of the fire emitter, you have to understand that the ColorChange class wants 2 arguments: The color of Logo and the color of the bright parts of the flames. That being said, you can use any colors you want of course. So we change this orange fire:

into a blue cool fire:

Some hints (for the rest, please dig into the fla file below):

Of course, this needs some tuning, e.g. it's too fast and the frame rate is too low and it's otherwise ugly. Anyhow, I wouldn't join a degree program that banks on the effect of a Flash Logo ;)

2.5 Playing around with the other FliNT examples

The Flint examples all come in two versions, either Flash or PureAS3. Go for the Flash version (unless you want to learn how to play with Flex in which case you will have to start reading the Adobe Flex and AS3 Compiling a program tutorials in this wiki).

The Flash version examples usually have just a single line in the script code that you insert in frame 1:

This instruction simply includes the contents of the file "Frame1.as" that you will find in the same directory. In our examples above we just copy/pasted the contents of these *.as files into the AS script. The result is the same, but the strategy of including an *.as file is smarter if you plan to reuse your code and if your prefer to use a different editor. We included the code in the *.fla for the simple reason that this way you only need to grab a single file.

To play with the examples in the Flash CS3 environment, the only thing you will have to do is to open the respective *.fla and then fix the classpath, i.e. tell Flash where the Flint_xxxx/src directory is located. E.g. if you need a firework, open in CS3 the

Then fix the classpath as described in the Let's snow example

Notice: The resulting swf always will include all the necessary ActionScript code, i.e. you won't have to copy the Flint files to the server.