To add interactivity to your flash animations, you need to add little scripts. To create scripts embedded in a FLA file, create a new layer called "Actions" then open the Actions panel (F9). The Actions panel consists of three panes: the Actions toolbox, which groups ActionScript elements by category; the Script navigator, which lets you move quickly between the scripts in your Flash document; and the Script pane, where you type your ActionScript code. 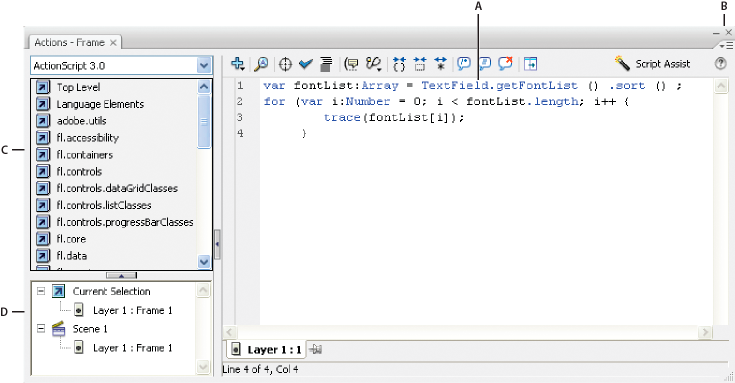 3 Use context-sensitive help from the Actions panel

To select an item for reference, do any of the following:

To open the Help panel reference page for the selected item, do one of the following:

The Code Snippets panel assists both non-programmers and programmers to produce ActionScript code. The former may learn some code or at least will make less mistakes and both can type less and work faster. This feature only became available in CS5.

Code snippets are ActionScript snippets for a variety of purposes:

The menu of available snippets is grouped in five categories 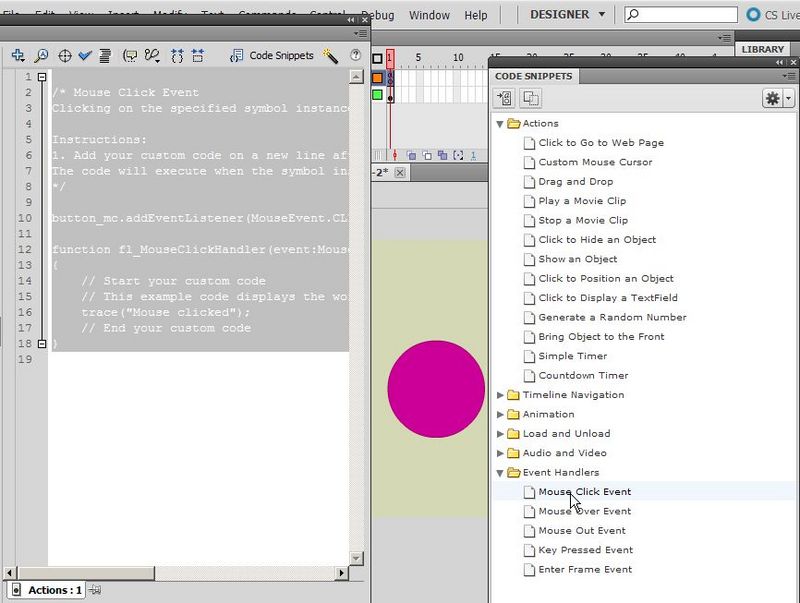 (1) Make sure that you have an Actions layer, else Flash will add it for you. In other words, if you are used to another name like Script, rename it. This is annoying behavior, personnally I don't like Action at all, it's just confusing.

(2) If you plan to add behavior and interactivity to object on the stage:

Else Adobe will do it for you and you should avoid this since Flash will select names in your place ...

4.2 Add code snippets to either an object or a frame

(1) Select an object on the stage if you want to add interactivity or behavior of the object. Select a frame in the Timeline if you wish to add code that affects the frame as a whole (e.g. timeline navigation)

Therefore, do it yourself and before !

(2) Open the Code Snippets panel (either by clicking on the icon on top of the actions panel or directly Window->Code Snippets on the stage), then double-click the snippet you want to apply.

If you selected an object on the Stage, Flash adds the snippet to the Actions panel in the frames containing the selected object and uses the object's instance name.

If you selected a Timeline frame, Flash also inserts code as above to the actions layer of the selected frame.

(3) In the Actions panel, view the newly added code and replace any necessary items according to the instructions at the top of the snippet.

This article is also available under the following copyright: Some contents of this page (including pictures) have been taken from Adobe's Adobe Flash Professional CS5 , in particular from the Working with ActionScript "sub chapter" You also must quote this source according to the Attribution-Noncommercial-Share Alike 3.0 License that is used by both Adobe and Edutechwiki
Retrieved from "http://edutechwiki.unige.ch/mediawiki/index.php?title=Flash_actions-frame_tutorial&oldid=59752"
Categories: