ArgueGraph is the name of CSCL script invented by Pierre Dillenbourg. It has been described in several publications (see the references below).

The goal of the original ArgueGraph script (Jermann & Dillenbourg, 1999) was that students learn to relate courseware design choices with the underlying learning technologies. Since then, it has been used in other contexts.

ArgueGraph is a so-called "macro-script", i.e. its core principle is to set up pairs in a special way to favor argumentation. It has been mostly used in face-to-face (classroom) teaching. It also engages learners at three levels of activities: indivdual, group and class.

The script is based on a simple multiple-choice questionnaire produced by the teacher. For each answer of each question, the teacher determines X and Y values that will be summed to compute the students' opinion in a two-dimensional space. This script includes five steps:

Each student takes an on-line multiple choice questionnaire. For each choice made, the student also enters an argument in a free-text entry zone. 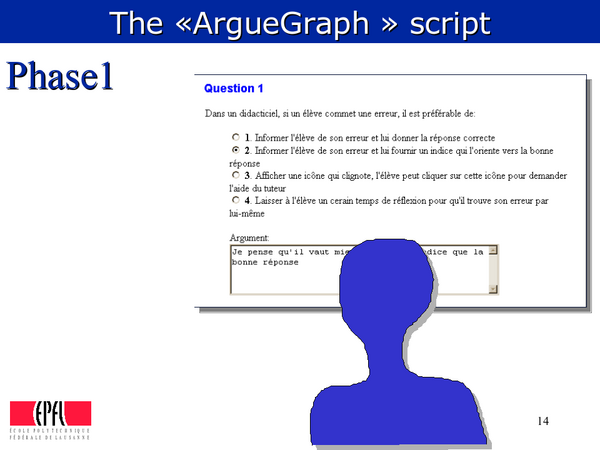 The system produces a graph in which all students are positioned according to their answers.A horizontal and vertical score is associated to each answer of the quiz and the students' position is the sum of these values. Students look at the graph and discuss it informally. The system or the tutor forms pairs of students by selecting peers with the largest distance on the graph (i.e. that are most different). 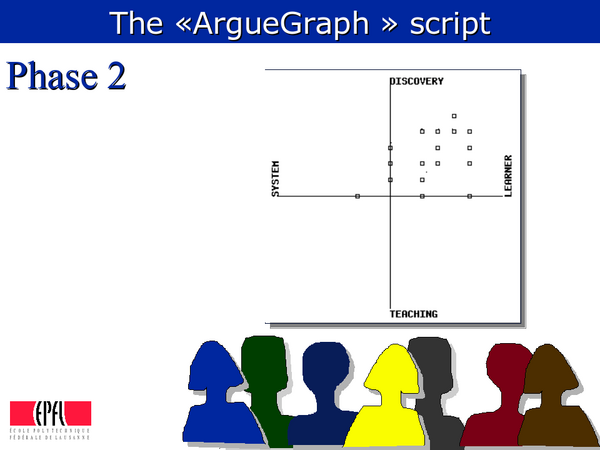 Pairs answer the same questionnaire (as in step 1) together and again provide an argument. They can read their individual previous answer. 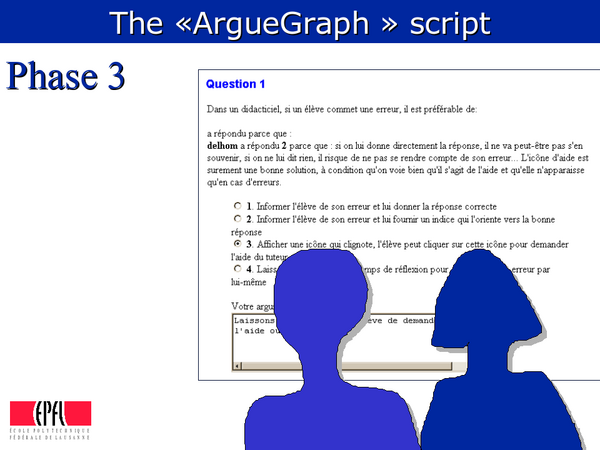 For each question, the system computes the answers given individually (phase 1) and collaboratively (phase 3). The teacher/tutor uses these data during a face-to-face debriefing session. The teacher asks students to comment on their arguments. The set of arguments covers more or less the content of the course but is completely unstructured. The role of the teacher is to organize the students' arguments into theories, to relate them, to clarify definitions, in other words, to structure emergent knowledge. 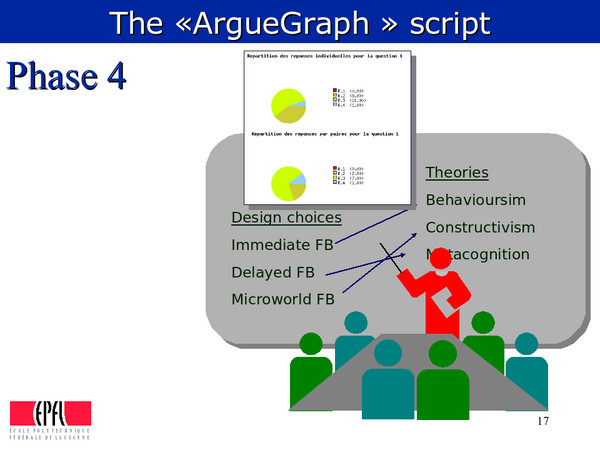 Each student writes a synthesis of all arguments collected for a specific question. The synthesis has to be structured according to the theoretical framework introduced by the teacher during the debriefing (phase 4)

This script has been successfully used at TECFA to teach the relationship between learning theories and the design of educational software (Jermann & Dillenbourg, 1999). It can be generalized to conceptual domains in which multiple theories co-exist.

This script is described as follows in the Kobbe/Kaleidoscope (2006) framework . See also the CSCL script article.