This article or section is currently under construction

In principle, someone is working on it and there should be a better version in a not so distant future.
If you want to modify this page, please discuss it with the person working on it (see the "history")

Grouping nodes organize objects in an X3D world in various ways. There exist several grouping nodes that have different functions.

The Group node collects nodes together with related purpose. Often such nodes are close to each other spatially.

If a DEF is provided, the group can be re-USEd.

Below is an example of scene made with only 3 Shapes. We define a house with a cube and cylinder and then reuse it twice. 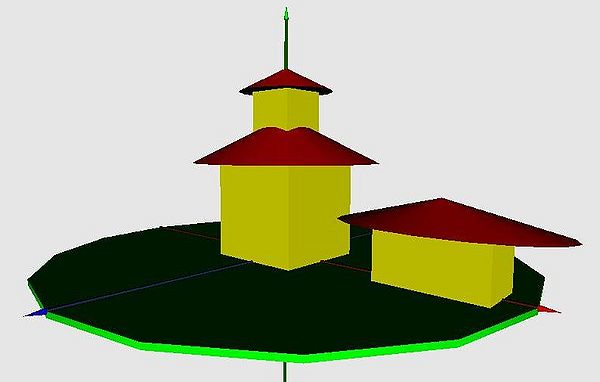 Houses made with Group, Transform and DEF/USE

The Root of X3D scene graph is always at (0 0 0). In the same way all create shapes always refer to 0 0 0. Primitives shapes are also drawn around the origin. Transform nodes can translate a local origin to another coordinate. E.g. if you wish to create two cubes next to each with the Box Shape, one of the two must be defined within a transform.

Since Transform can position, rotate about any axis and scale, it probably the most commonly used node in a scene graph.

Let's now look at some transforms

Translations are fairly obvious if you understand the coordinate system introduced in X3D graphics principles.

Rotations are more difficult to understand, since it is possible to define any arbitrary rotation axis.

Use our Javascript Radian Converver

In order to get your rotation right, we suggest to rotate an object only around the main axis, if necessary one after each other, i.e. use code like this as suggested by Don Brutzman in his slides:

Yaw, pitch and rool are angle names that are taken from sailing. Directions or rotation use the right hand rule, also introduced in X3D graphics principles. Just rember the the idea that you can imagine grabbing axis with your right hand, thumb pointing into the positive direction and then turn outwards (i.e. the natural way).

In addition, one often needs to define the rotation point. Per default it is in the middle of an object, but if you plan to rotate something like human or robotic limbs, the rotation point must be at one end of the limb.

Order of execution within a single Transform node

Understanding the ordering of complex transformation operations is really not easy. Since the result is very different whether you translate first, then rotate or the other way round, you should at least remember the following principle:

Use nested Transforms and remember that the innermost transformation is done first (read Transforms inside out).

Finally we shall quote from the Specification what happens if you use all the attributes of a Transform node.

The specification, then uses some VRML-like pseudo syntax to explain how these transforms are ordered. “Given a 3-dimensional point P and Transform node, P is transformed into point P' in its parent's coordinate system by a series of intermediate transformations. In matrix transformation notation, where C (center), SR (scaleOrientation), T (translation), R (rotation), and S (scale) are the equivalent transformation matrices”

is equivalent to the nested sequence of:

The Inline node allows to loads another X3D world within the current scene.

The Inline node takes the following Fields (and some more). The url attribute is mandatory of course, all the others are optional.

url 'list of URLs'
is one or more quoted strings that all point to the same object in one or more locations. Each address is retrieved and evaluated, in order, until the desired Inline file is successfully retrieved. Relative addresses work both on localhost or server. Absolute addresses provide a reliable backup

bboxSize "-1 -1 -1"
the bounding box size is automatically calculated, but it can be specified as an optimization or constraint.

For another example, look at the Group example world above.

This article is also available under the following copyright: Attribution-Noncommercial-Share Alike 3.0 Unported, i.e. the same as EduTechWiki, but you also must cite the following sources from which most material is drawn: