Inkscape is a popular tool within creative commons/opensource communities, e.g. fab labs and for several reasons:

Before you start: Make sure to install the latest version. We found that Inkscape 0.49 (that somehow survived in the program files (x86) directory) did not produce proper print files for cutting.

Trotec CO2 laser cutters seem to work like most other laser cutting machines:

Make sure to create files that include

You may not be able to engrave fonts. In that case (only), once you are happy with a font, make a copy of the file and save it, then convert fonts to paths. Verify that both fills and lines are defined if you want both.

If your drawing is ready:

There is some better information in french

The K40 is a cheap chinese made laser cutter with terrible software mostly written in chinese and requiring a dongle to use. But, it has been reverse engineered by Scorchworks to control the Laser Cutter directly and get all the resulting bells and whistles from that process. So it directly loads Inkscape svg (and others) files and uses them to control the laser cutter. Turning what was a pretty terrible experience into something more reasonable. But, it also means that Inkscape is one of the primary ways people use the device. Scorchworks K40.

The first you do this, you may make mistakes and damage some drawings. We therefore recommend saving the file into a new version, before each major operation.

Scatter an object along a path - principle

To subtract the pattern from another path, e.g. a dinosaur 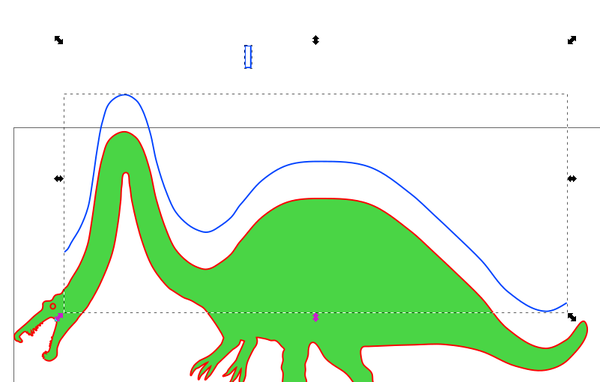 1. Select both an object to replicate and a path

2. Result of the operation. This still needs to made into a single path (degroup all and union) 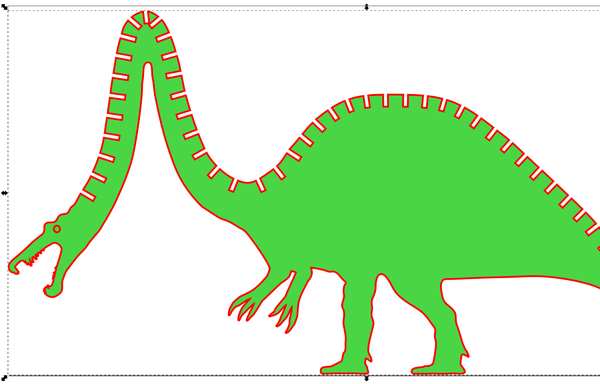 3. Final result (first trial). The red line then had be reduced to 0.01mm and some insets had to be adjusted a bit. However, better adjust the rectangles before union and subtraction !

The dinosaur was extended from this (the big red one in the back). I cut away the head and added a long neck (yes this a heavy genetic splice). Also made the tail somewhat prettier ;

In some "modes" you cannot directly print fonts. They have to be transformed to drawings (either strokes or fills). (I actually have to check this in more detail because I never had problems, my students did - Daniel K. Schneider (talk) 2 November 2016 ( oct 2017).

It probably is best to convert fonts to paths and wind up with fills. There are two possibilities:

E.g. tokens for simulations and games

There are commercial specialized websites that provide fonts suitable for cutting and engraving.

I'd have to see the Trotec Control software which does have some built-in image processing facility.

First, learn how to install extensions. Basically, you have to find the extension directory and then copy all the files

Some extensions may not work, either because they were not tested on your operation system or because they are not compatible with your inkscape version.

This extensions allows to generate puzzles. Tested in Inkscape 0.91, Ubuntu 16LTS in Sept 2016.

The eggbot is a open-source art robot that can draw on spherical or egg-shaped objects. The Inkscape eggboot extension eases the design process for writing and drawing on eggs. However, some of its functionality can be useful for laser cutting and engraving, in particular the Hershey fonts which generate drawings (glyphs as opposed to fonts).

However, this extension does not seem to be browser compatible, i.e. may produce some kind of raster format (to be tested).

Alternatively, Inkscape does have built-in "pattern" facility. Not so easy, search for tutorials.