As demonstrated in the theory of reasoned Action, the Technology Acceptance Model postulates that the use of an information system is determined by the behavioral intention, but on the other hand, that the behavioral intention is determined by the person’s attitude towards the use of the system and also by his perception of its utility. According to Davis, the attitude of an individual is not the only factor that determines his use of a system, but is also based on the impact which it may have on his performance. Therefore, even if an employee does not welcome an information system, the probability that he will use it is high if he perceives that the system will improve his performance at work. Besides, the Technology Acceptance Model hypothesizes a direct link between perceived usefulness and perceived ease of use. With two systems offering the same features, a user will find more useful the one that he finds easier to use (Dillon and Morris, on 1996).

According to Davis ( 1986 ) perceived ease of use also influences in a significant way the attitude of an individual through two main mechanisms: self-efficacy and instrumentality. Self-efficacy is a concept developed by Bandura ( 1982 ) which explains that the more a system is easy to use, the greater should be the user’s sense of efficacy. Moreover, a tool that is easy to use will make the user feel that he has a control over what he is doing (Lepper on 1985). Efficacy is one of the main factors underlying intrinsic motivation (Bandura on 1982; Lepper on 1985) and it is what illustrates here the direct link between perceived ease of use and attitude. Perceived ease of use can also contribute in an instrumental way in improving a person’s performance. Due to the fact that the user will have to deploy less efforts with a tool that is easy to use, he will be able to spare efforts to accomplish other tasks.(Davis, on 1986).

It is however interesting to note that the research presented by Davis (1989) to validate his model, demonstrates that the link between the intention to use an information system and perceived usefulness is stronger than perceived ease of use. According to this model, we can therefore expect that the factor which influences the most a user is the perceived usefulness of a tool.

Although the intial TAM model was empirically validated, it explained only a fraction of the variance of the outcome variable, IT usage (from 4% to 45%, according to McFarland and Hamilton, 2006). Therefore, many authors have refined the initial model, trying to find the latent factors underlying perceived ease of use and perceived usefulness. in TAM2, Venkatesh & Davis (2000) showed that social influence processes (subjective norm, voluntarity, image) and cognitive instrumental processes (job relevance, output quality, result demontrability) affected perceived usefulness and intention to use. A notable refinment of the TAM model is proposed by (Mc Farland and Hamilton, 2006). Their model assumes that 6 contextual variables (prior experience, other's use, computer anxiety, system quality, task structure, and organizational support) affect the dependant variable system usage through 3 mediating variables (computer efficacy, perceived ease of use and perceived usefulness). The model also postulates direct relations between the external variables and system usage (see Figure 2)and not only mediation through perceived ease of use and perceived usefulness. 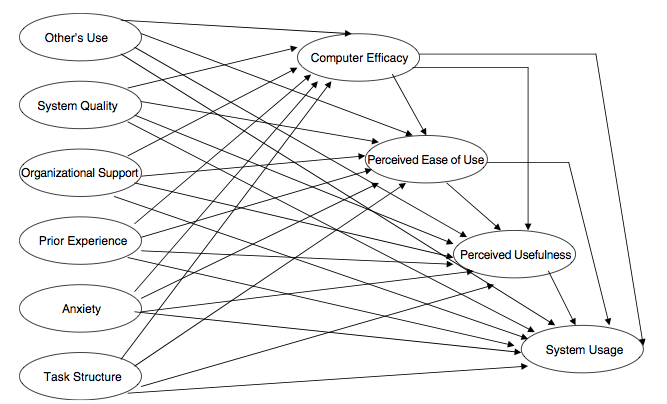 
The results comforted the research model, showing that "system usage was directly and significantly affected by task structure, prior experience, other's use, organizational support, anxiety, and system quality." Mediation effect were also shown as predicted. Thus However, for some relations, the effect went in the opposite direction from expected, like other's use lowering computer efficacy or high quality systems linked to low frequency of use.

In sum, the initial model or its extension does not completely accounts for the observed variance in system usage. However, the models all agree that computer efficacy affects perceived ease of use, which in turns is strongly related to perceived usefulness.