Research and practice models in education

Roschelle et al. (2011:38) state that “Some fields of science exist for the discovery of knowledge without reference toapplication. Learning scientists, however, have always sought the application of their findings to improve education; our field undertakes an applied or perhaps a pioneering science that combines both application and foundational research(J. S. Brown, 1991). It is a design science or “science of the artificial” (Simon,1996). We often strive to operate in Pasteur’s Quadrant (Stokes, 1997). Hence,publications in an academic journal cannot be the ultimate outcome of our efforts;there must be some external measure of the value of our contributions. Socratessaid that the unexamined life is not worth living. To which we add, the unexamined research program is not worth conducting.”

2 The Burkhardt and Schoenfeld typology and model

2.1 Typology of research and practice in education

Model 1: Teachers read research and implement it in their classrooms.

We could summarise this as a call for more use-based research (top/right) in Pasteur's quadrant (Stokes, 1997). “Our point is that the same profitable dialectic between theory and practice can and should occur (with differing emphases on the R&D components) from the initial stages of design all the way through robust implementation on a large scale.” (Burkhardt and Schoenfeld, 2003: 5)

James Pellegrino (2001), suggests defining research in Pasteur's quadrant (Stokes, 1997). “Stokes maps research in a two-dimensional space with research being low to high in terms of its pursuit of general theoretical principles, and low to high in terms of its attempt to solve practical problems. Pasteur's work serves as the prototype for research that operates at the high end of each scale. His work typifies the high-high quadrant. The contrast quadrants are named after Bohr, whose work was high on theory but low on application, and Edison, whose work was low on theory but high on application. The final quadrant, defined by being low on both scales, remains unnamed. I surmise that this is the area where many doctoral studies belong. Besides, who would like to have a quadrant named after them which implies that one's work has neither practical nor theoretical value?”

A tension exists between educational practitioners and researchers, which is often attributed to their dichotomous and often times polarizing professional ideologies or Discourse communities. When determining what works in education, researchers tend to emphasize evidence-based practices (EBPs) supported by research that is rigorous and internally valid, whereas practitioners tend to value practice-based evidence (PBE) that is relevant and externally valid. The authors argue that these separate mindsets stem from the classical view of research as being either rigorous or relevant. In his canonical Pasteur’s Quadrant, Stokes (1997) proposed that rigor and relevance are complementary notions that, when merged, further the production, translation, and implementation of instructional practices that are both rigorous (i.e., evidence-based) and relevant(i.e., practice-based). The authors propose educational design research (EDR) and communities of practice (CoPs) as frameworks through which to realize the promise of Pasteur’s quadrant.

Unlike most other adaptations of Stokes' model, this model also conceptualizes the lower left quandrant: “This quadrant re- flects Galbraith’s (1958) concept of conventional wisdom—ideas or explanations that, though widely held, are not examined in any meaningful way and are therefore oftentimes inaccurate.” (Smith et al. 2013:152).

John R. Feussner, in a talk (retrieved Jan 2014), presented a more dynamic module that visualized the interplay between Stokes 3 types of research and understanding / technology. 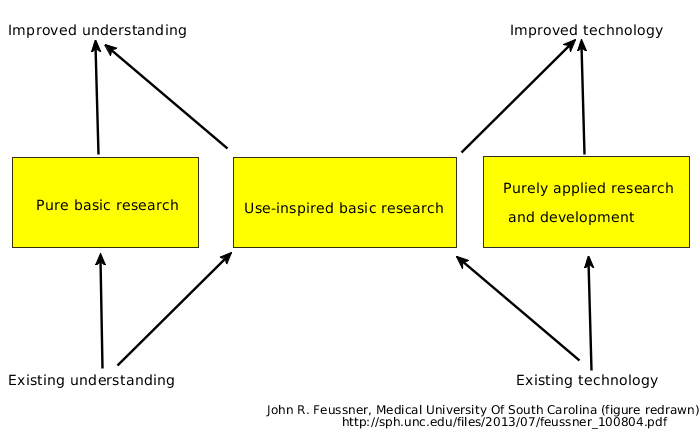