A pictographic language allows people to communicate via pictograms. The content of a "sentence" typically would include a sequence of standardized pictures (pictograms, icons,...). It thus could replace more difficult to learn trade languages or International auxiliary langauges like Esperanto or Volapük.

The earliest systems can be found in the neolithic period and later in some mesoamerican writing systems (Wikipedia), e.g. Aztec.

Today's systems represent constructed languages (conlangs). Its best known ones were invented in the last century.

The first pictographic languages created in the last century were aimed at improving communication between different cultures. Therapeutic systems (but mostly systems based on picture or icon collections) then became increasingly popular.

According to Wikipedia, “iConji is a free pictographic communication system based on an open, visual vocabulary of characters with built-in translations for most major languages.”. A first version was released for the Apple iOS and Web browsers in 2010.

iConji, according to its homepage, uses about 1200 colorful characters. Apps can then translate from and to several languages. i.e. Chinese, English, French, German, Hindi, Italian, Japanese, Polish, Spanish, Swahili, and Swedish.

There is an online search form (e.g. see "problem") and a list of iConji pictures for reverse search.

According to Wikipedia, Blissymbols or Blissymbolics was conceived as an ideographic writing system called Semantography consisting of several hundred basic symbols, each representing a concept, which can be composed together to generate new symbols that represent new concepts. Blisssymbols also have been used to teach disabled people to communicate.

I want to go to the cinema

According to a Unicode font proposal, “Blissymbolics form an ideographic writing system, like Chinese, with its own grammar and syntax. This language is, today, primarily used by people with physical and cognitive handicaps of various kinds (for instance, those associated with cerebral palsy), and is promoted by the organization Blissymbolics Communication International.” Interestly, they also make the following statement: “Blissymbolics were developed in the middle of the twentieth century by Charles Bliss as a “universal” language that (he hoped) could cut across national boundaries and facilitate international communication and peace. Like other utopian languages, Blissymbolics’ popularity fell short of the designs of their creator – although their present-day use as the primary language of people who might otherwise have no means of communicating at all is more of a blessing to them, their families, and their communities, than any utopian language could hope to be.”

For other examples, see List of writing systems (Wikipedia)

While Blisssymbols are also used in therapy, some systems were exclusively designed for therapy. These systems help communication and do not necessairly involve grammar. E.g. most of the time, simple single pictures are being used.

“The Picture Exchange Communication System (PECS) is a form of augmentative and alternative communication produced by Pyramid Educational Consultants, Inc. While the system is commonly used as a communication aid for children with autism spectrum disorder (ASD), it has been used with a wide variety of learners, from preschoolers to adults, who have various communicative, cognitive, and physical impairments, including cerebral palsy, blindness, and deafness.”

PECS has been designed for therapeutic use and its training includes protocol includes going through several phases. In this section we only will look at symbols and phrases that can be formed.

PECS symbols are mostly drawings of an object or a situation. There exist an official copyright catalogue of PECS signs, but it seems that many people create their own. In phase one, Each patient then will receive a small deck of cards that represent objects he wants and that he can show in exchange for the real object. In phase three, discrimination between symbols is taught. Using simple phrases with sentence openenrs, e.g. "I want ______" is taught in phase 4 only. 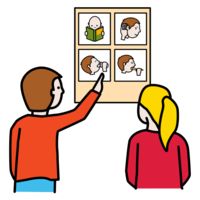 Augmentative and Alternative Systems of Communication (AAC). Illustrations from Arasaac

The website offers a large collection of symbols, of activities based on these symbols as well as online tools to build and distribute both. These assets are available under a Creative Commons License BY-NC-SA

According to Wikipedia (oct 2015), “Tangible symbols are a type of augmentative and alternative communication (AAC) that uses objects or pictures that share a perceptual relationship with the items they represent as symbols. A tangible symbol's relation to the item it represents is perceptually obvious and concrete - the visual or tactile properties of the symbol resemble the intended item. Tangible Symbols can easily be manipulated and are most strongly associated with the sense of touch.These symbols can be used by individuals who are not able to communicate using speech or other abstract symbol systems, such as sign language.”

There are two main types of symbols:

According to Rowland and Schweigert, tangible symbols are a subset of Concrete Symbols and can be either three-dimensional objects or two-dimensional pictures or (our addition) 2D 1/2 objects, i.e. pictures with a relief such as the nice hamburger to the right.

Tangible symbols have the following properties:

According to Rowland and Schweigert's primer, “tangible symbols should be constructed for each individual user, capitalizing on the features of the referents that are most meaningful to him or her.”. This implies that longer periods of testing are required in order to find/create the right symbols. The authors designed a tangible symbols pretest that helps determining what type of symbol to start with.

Procedure: “The typical format is to present a different preferred item to the learner at each trial. The item remains tactually or visually present to the learner but he does not yet get it. Now an array of symbols is presented (randomly vary the position of the correct symbol in the array) and the individual should indicate the symbol that corresponds to the presented item. If he does so, then allow the learner to briefly interact with that item. If he responds incorrectly (that is, he does not select the corresponding symbol/item or does not respond at all) then show the correct response and proceed to the next trial.” (Rowland and Schweigert, 2000: 24)

5 A minimal set of symbol categories ?

Languages usually have (somewhat) clearly identified parts of spech elements, i.e. types of words that can be combined into sentences respecting some kind of grammar. Some pictographic languages (e.g. Bliss) do have grammatical indcators on symbols, others like PECS do not.

“Research into great ape language has involved teaching chimpanzees, bonobos, gorillas, and orangutans to communicate with human beings and with each other using sign language, physical tokens, and lexigrams; see Yerkish. Some primatologists argue that the primates' use of these tools indicates their ability to use "language", although this is not consistent with some definitions of that term.” (Wikipeida, retrieved oct 2015).

According to Wikipedia, Yerkish is an artificial language developed for use by non-human primates. It employs a keyboard whose keys contain lexigrams, symbols corresponding to objects or ideas. The symbols used in Yerksih were rather abstract lexigrams, as opposed to icons, i.e. not representing a thing (as opposed to the pictographic languages made for humans).

There exist many other pictographic systems, e.g.,

8.5 About other natural and artificial languages