Since the first computers, psychologists have drawn parallels between computers and human thought. At its core are memory models. The memory model which dominated the 1970’s and 80’s is the three component information processing system of Atkinson and Shiffrin (1968, 1971) insprired by a typicial computer hardware architecture:

An important question raised by many research concerns the power of working memory. It is generally believed that human working memory is very limited, we can only keep in mind a few things at a time. Miller's (1956) famous "The magical number seven plus or minus two" paper layed the groundwork.

3 Principles of the information processing approach

According to Huitt (2003), there are a few basic principles that most cognitive psychologists agree with:

One of the most widespread theories of multimedia learning is described by Mayer . The model is based on well known cognitive sciences theories: The limited capacity of short term memory, described with the three stages of human memory . Sensory memory, short-tem memory and long-term memory being the three stages information passes through in order to be remembered. Later, Baddeley & Hitch defined their multi-component model of working memory. In particular, they showed that phonological and visuo-spatial information are stored in short-term memory by different processes with different resources. The dual coding theory formulated by Pavio also supports the separated processing of verbal and non-verbal (or visual) information. Hence, a word encoded in a verbal way will be better recalled if also encoded in a visual form. Mayer also describes a principle of active information processing , stating that learning is more efficient if reinforced by a real cognitive investment and work. A conscious activity from the learner, such as voluntary attention shifts to important elements or mental organization. In the end, Mayer's theory of multimedia learning is close from Attkinson & Shiffrin model, with three phases of information processing: selection, organisation and integration to a prior mental model. Mayer insists on the fact that these phases are not a fixed order, but more an iterative process.

See the multimedia presentation article for an application of this model.

Schnotz and Bannert's provided an elaborated model of how verbal-symbolic and depictive information are conjointly and interactively processed in order to form a mental model, which eventually may affect conceptual organization. They define the final organisation of knowledge in two parts. On one hand, a propositional representation gathers together semantic elements, in a symbolic structure. On the other hand, a mental model is formed from perceptive and visual organisation of the different elements in an analogical form, but also from semantic elements. Both representations are strongly related and have similar structures.

The selection of pertinent information uses top-down processing. Previous knowledge guides the gathering of information. In the absence of a pertinent mental model to guide visual exploration, other selection processes will be used. Lowe showed that novices learners were mostly relying on perceptive salience to extract information form a meteorological map.

Knowledge organisation is both based on bottom-up and top-down processing. Perceptive organisation of the elements as well as anterior knowledge are used in order to build a mental model linked with a propositional representation. Of course, these selective and organisational functions stand on working memory. 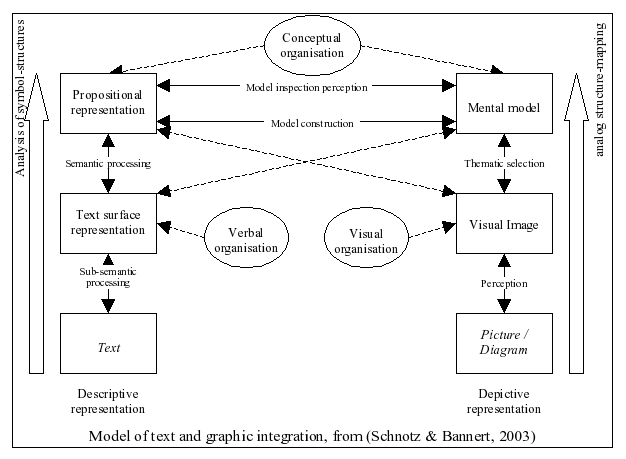