Translated from the french version, may include some gibberish. I strongly suggest reading Flash CS6 motion tweening tutorial instead ...

Learning goals
Learn about basic motion animation, i.e. move an object from A to B, to C ...
Add some simple shape transforms to the animated object
Learn how to to frame-by-frame animations with embedded movie clips.
Prerequisites
Flash CS3 desktop tutorial
Flash layers tutorial (first part)
Flash drawing tutorial (at least some of it)
Flash frame-by-frame animation tutorial (not absolutely needed, but probably useful)
Flash motion interpolation overview
Moving on
Flash shape tweening tutorial
Flash animation summary
After that you should be ready for interactivity. E.g. do the Flash button tutorial
Quality and level
This text should technical people get going. It's probably not good enough for beginners, but may be used as handout in "hands-on" class. That is what Daniel K. Schneider made it for...
It aims at beginners. More advanced features and tricks are not explained here.
Materials (*.fla file you can play with)
http://tecfa.unige.ch/guides/flash/ex4/motion-tweening-intro/
Alternative
Flash CS6 motion tweening tutorial

﻿Motion tweens are applicable only to instances of symbols and text fields. All other types of objects are wrapped into a symbol when interpolation is applied to them. We suggest that you should not let Flash do this, i.e. think ahead and and transform drawings into symbols beforehand.

A symbol is a graphic, a button or movie clip created in Flash and that is reusable in the same document or in others. Each symbol that you create or use is inserted into the library (library). The symbol itself is never used directly in an animation, you must create an instance. In practical terms this means that you must drag the object from the library on the scene, then give it a name as discussed below. For a programmer, a symbol represents a kind of class (ie a generic object). To learn more, read Flash embedded movie clip tutorial

You only can interpolate one single object (instance). You later can replace an object by another, but there can never be two different objects in a motion tween. Of course, you can add other layers if you want to create animations with multiple objects.

Finally in each keyframe (starting, ending and those that you added), you also can transform other properties of the object, for example: size, rotation, tint, 3D position etc..

A traditional Flash desginer, creates all animations in the main timeline (scenario). The scenario will then be divided into sequences, called scenes. A modern Flash developer rather would tend to place individual animations within a symbol of type "movie clip" and then place those clips in various frames for example. A movie clip symbol can contain its own timeline (scenario) and therefore nested symbol instances, which in turn can be interpolated in their own script. For example: you could create a movie clip called "bird animation. In this movie clip, you could create a moving object ("bird") which in turn would flap its wings. These wings are are again symbols embedded at a third level and we will have a the following hierarchy: Bird animation -> Bird -> Wings.

In the following screenshot we show how to add a motion tween (motion tween) to an "Raising Sun" symbol of the "Sun" which is in the library. 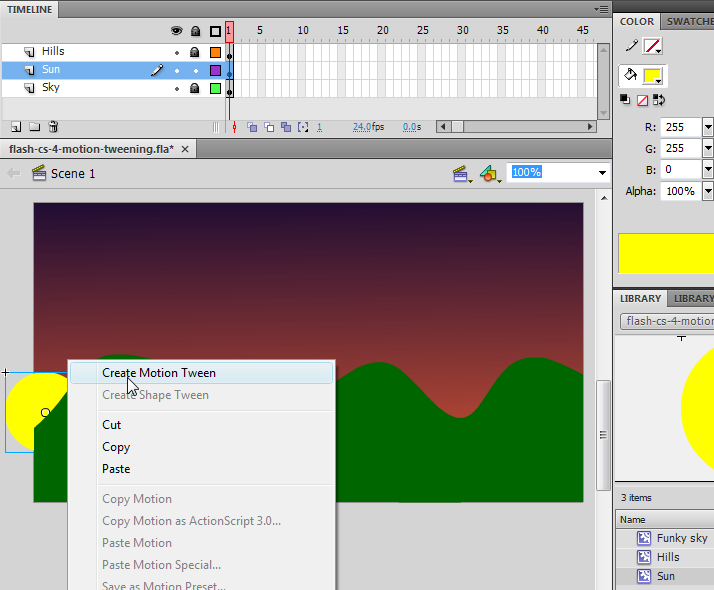 Flash now creates a motion tween span with an interpolation of 24 frames (default). Span refers to the range of the interpolation, from the beginning to the end. By default 24 frames (i.e. one second at a frame rate of 24 FPS).

The control (slider) in the timeline (scenario) was placed in the last frame. Now move the object to a new position. A motion path (trajectory) appears on the scene. The motion path shows the trajectory of interpolated images during the tween span. For now we see just a straight line that connects the first frame to last. You can change this interpolation path to create a more interesting one. 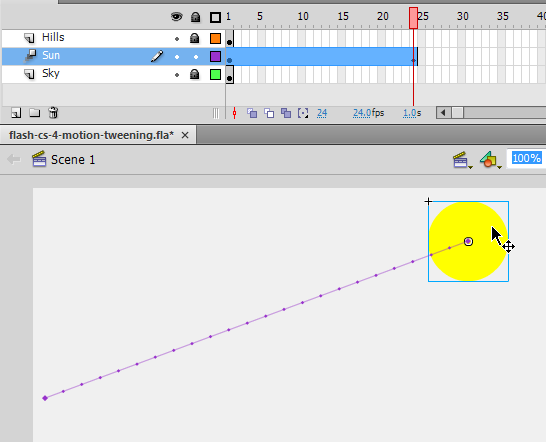 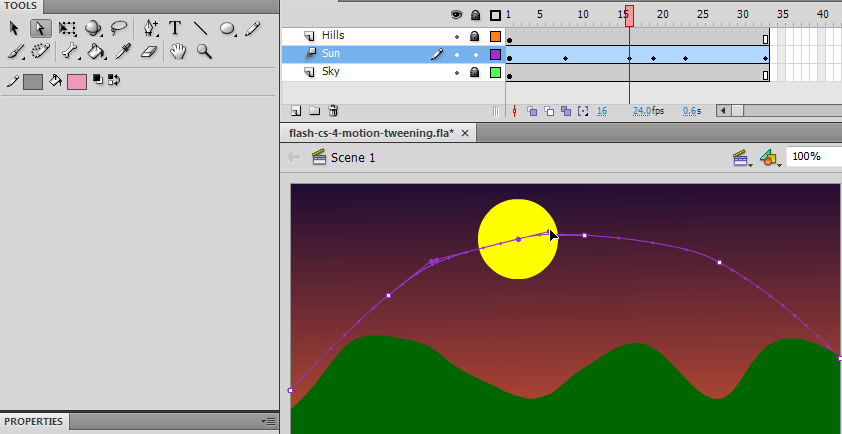 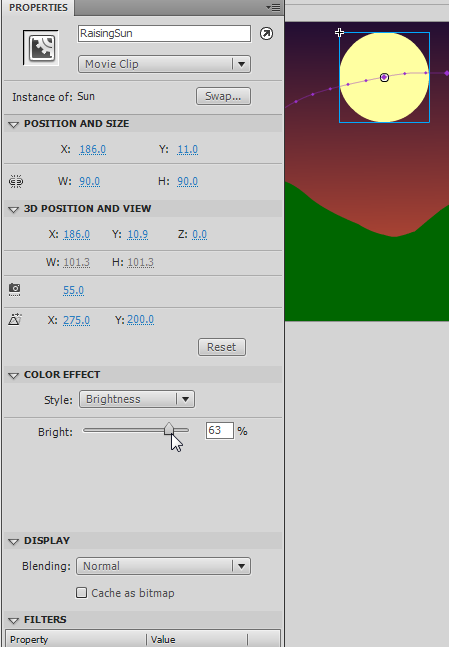 The editor allows to move all kinds of operations that are difficult or impossible to do on the stage. 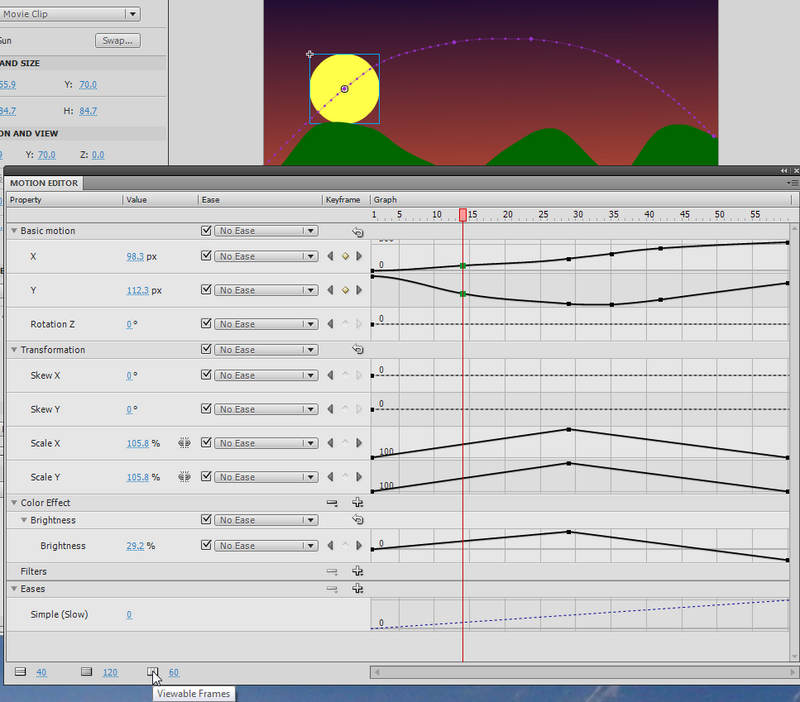 The motion controls of the editor 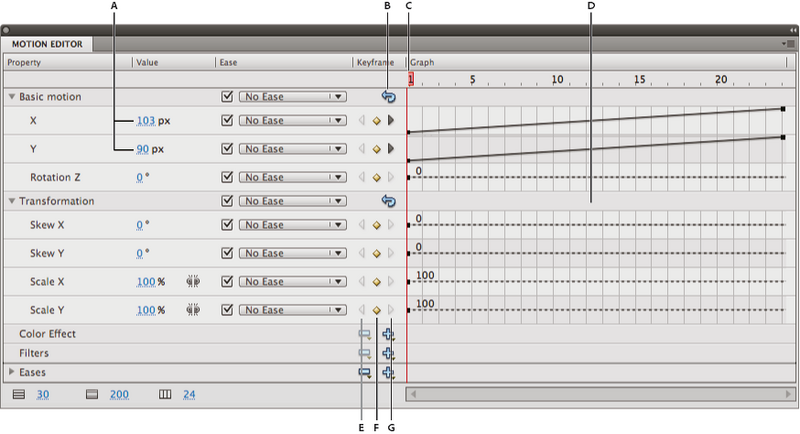 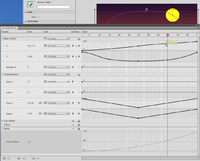 The layout of the animation

To edit the curve of the path, there are several possibilities:

With Right-click menu or with Alt-click (Windows) or Command-click (Mac) you can transform corner points into smooth points in vice versa. A "smooth point" smoothed curves. A corner is a corner point without controls for "Bezier" smoothing. Before clicking, be sure that you see a cursor with the small rectangle. Otherwise it does nothing ...

Here is a screenshot of Adobe manual that illustrates this principle: 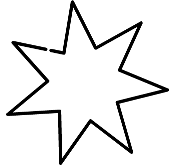 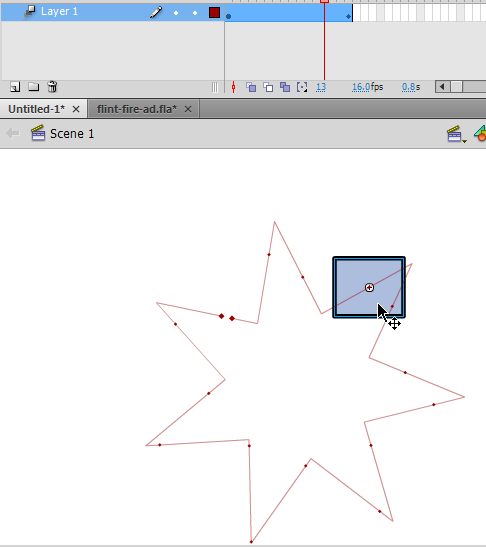 This article is also available under the following copyright: Attribution-Noncommercial-Share Alike 3.0 Unported. A part of this article has been taken from Create motion tweens, Adobe, Using Flash and you also must quote this source.
Retrieved from "https://edutechwiki.unige.ch/mediawiki/index.php?title=Flash_CS4_motion_tweening_tutorial&oldid=59792"
Categories: