Environment variables are a set of dynamic values that can affect the way running processes will behave on a computer.

Even advanced Windows users should know about these. It can make your life much easier when you install certain software, e.g. Java applications, the Adobe Flex SDK, etc. You can set variables:

In all Unix and Unix-like systems, each process has its own private set of environment variables. By default, when a process is created it inherits a duplicate environment of its parent process, except for explicit changes made by the parent when it creates the child (more exactly, between fork and exec). All Unix operating system flavors as well as DOS and Microsoft Windows have environment variables; however, they do not all use the same variable names. Running programs can access the values of environment variables for configuration purposes

Contains a colon-separated list of directories that the shell searches for commands that do not contain a slash in their name (Commands with slashes are interpreted as a file name to execute, and the shell attempts to execute them as they are). See (computing)

Contains the location of the user's directory. Although the current user's home directory can also be found out through the C functions getpwuid and getuid, $HOME is often used for convenience in various shell scripts (and other contexts).

Contains the identifier for the display that X11 programs should use by default.

On many Unix systems with a dynamic_linker, contains a colon-separated list of directories that the dynamic linker should search for objects when building a process image after exec.

LANG expands to the default system [1]; LC_ALL can be used to override this. For example, if its value is pt_BR, then the language is set to (Brazilian) Portuguese and the locale to Brazil.

Refers to zone. It can takes values like GMT, AST, etc.

In all Unix and Unix-like systems, each process has its own private set of environment variables. By default, when a process is created it inherits a duplicate environment of its parent process, except for explicit changes made by the parent when it creates the child (more exactly, between fork and exec). All Unix operating system flavors as well as DOS and Windows have environment variables; however, they do not all use the same variable names. Running programs can access the values of environment variables for configuration purposes.

Examples of environment variables include

Shell scripts and batch files use environment variables to store temporary values for reference later in the script, and also to communicate data and preferences to child processes.

In Unix, an environment variable that is changed in a script or compiled program will only affect that process and possibly child processes. The parent process and any unrelated processes will not be affected. In DOS changing a variable's value (or removing it) inside a BATCH file will change the variable for the duration of command.com's existence.

In Unix, the environment variables are normally initialized during system startup by the system init scripts, and hence inherited by all other processes in the system. Users can, and often do, augment them in the profile script for the shell they are using. In Microsoft Windows, environment variables defaults are stored in the windows registry or set in autoexec.bat.

will print the value of $PATH

In UNIX, the following commands can also be used, but are often dependent on a certain shell.

In UNIX, variables may be assigned without the export keyword. Variables defined in this way are displayed by the set command, but are not inherited by the child processes.

There is no equivalent in the DOS or Windows environments.

This variable contains the full path to the command processor, command.com.

This variable contains a semicolon-delimited list of directories in which the command interpreter will search for executable files. Equivalent to the UNIX $PATH variable (although note that PATH on Windows additionally performs the same task as LD_LIBRARY_PATH on Unix-like systems). Note that %PATH% can also be set like this PATH=c:\dos; where SET isn't required.

These variables contain the path to the directory where temporary files should be stored.

This variable points to the current directory. Equivalent to the output of the command cd when called without arguments.

This variable points to the current error level. If there was an error in the previous command, this is what you need to check against to find out about that.

This variable returns a random number between 0 and 32767

These variables refer to locations of critical operating system resources, and as such generally are not user-dependent.

Contains the full path to the Application Data folder of the logged-in user. Does not work on Windows NT 4.0 SP6 UK.

This variable contains the full path to the Windows NT command processor, cmd.exe.

This variable contains a semicolon-delimited list of directories in which the command interpreter will search for executable files. Equivalent to the UNIX $PATH variable.

This variable points to Common Files directory. The default is C:\Program Files\Common Files.

The %SystemDrive% variable is a special system-wide environment variable found on Microsoft NT and its derivatives. Its value is the drive upon which the system folder was placed.

The value of %SystemDrive% is in most cases C:. The system drive cannot be altered once the operating system is running.

The %SystemRoot% variable is a special system-wide environment variable found on Microsoft Windows NT and its derivatives. Its value is the location of the system folder, including the drive and path.

This variable points to the Windows directory. If the System is on drive C: then the default values are:

These variables store information related to resources and settings owned by various user profiles within the system. As a general rule, these variables do not refer to critical system resources or locations that are necessary for the OS to run.

The variable holds the name of the workgroup or Server domain|Windows Domain to which the current user belongs. The related variable, %LOGONSERVER%, holds the hostname of the server that authenticated the current user's logon credentials (name and password). For Home PCs, and PCs in a Workgroup, the authenticating server is usually the PC itself. For PCs in a Windows Domain, the authenticating server is a domain controller (a primary domain controller, or PDC, in Windows NT 4-based domains).

The %UserProfile% variable is a special system-wide environment variable found on Microsoft Windows NT and its derivatives. Its value is the location of the current user's profile directory, in which is found that user's HKCU registry hive (NTUSER).

Users can also use the %USERNAME% variable to determine the active users login identification.

3.2 Getting a value in windows

In DOS and Windows, the SET command without any arguments displays all environment variables along with their values.

3.3 Setting a variable in a Windows command file

In a command file e.g. my.bat or my.cmd or in the shell

To set a variable to a particular value in DOS-WINDOWS, use:

3.4 Setting a variable in Win XP

To modify a variable in the system (example 1 for XP)

On an English system:

Do not remove the other pathes ! Do not edit the system variables if you don't know what you do or you may regret it bitterly, because your system will stop working if do it wrongly. !

Here is a screendump showing some of the (french) Windows panels: 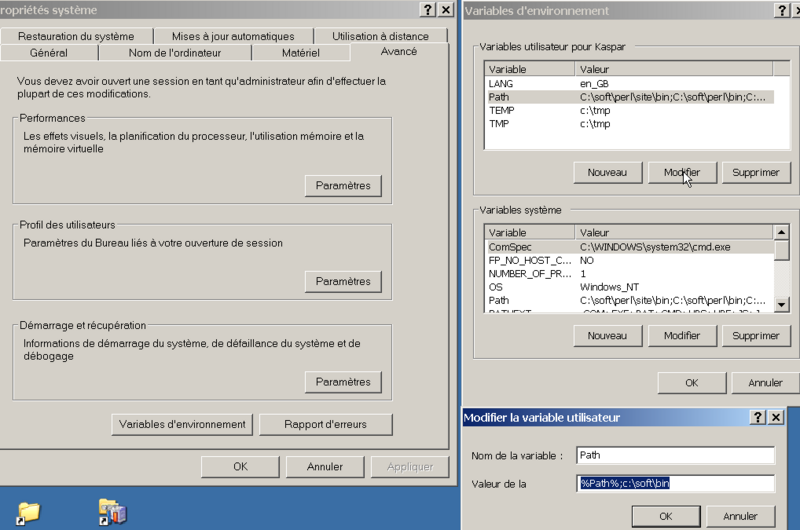 3.5 Setting a variable in Windows 7

The principle is exactly the same as in XP or VISTA.

With respect to XP, you'll have to click some more:

On a french speaking system: 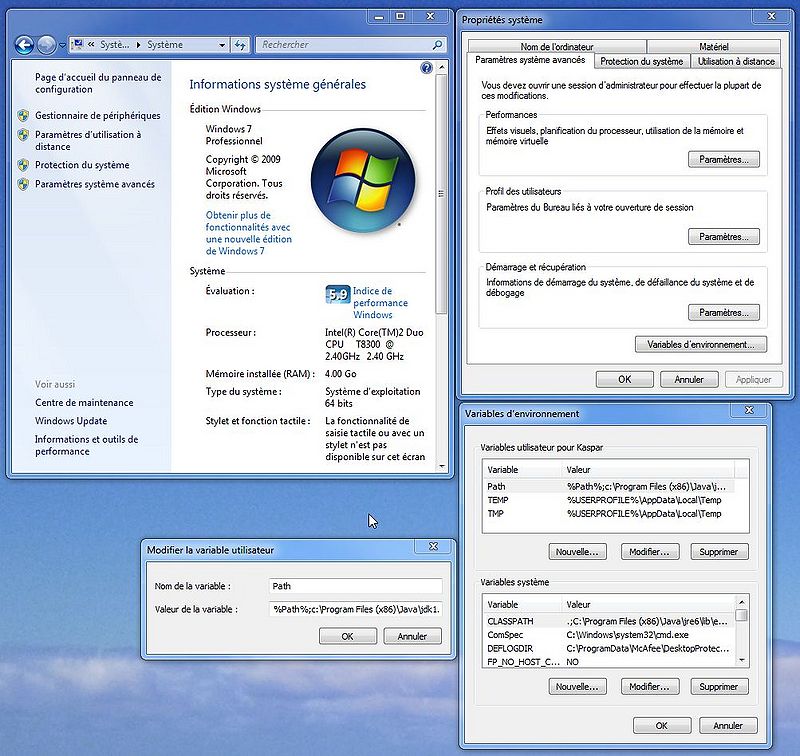 In an English system, it's probably:

Tip: Instead of wading through this complex windows/tabs/menu hierarchy you also can type "variable" in the search box of the start menu. The click the one of the links on top :)

Copyright Notice: Information in this article is also available under the GNU Free Documentation License (since most contents were taken from Wikipedia).