Moving on
The Flash article has a list of other tutorials.
Flash Video component tutorial

(Some formats may depend on whether QuickTime is installed on your computer).

Best bet is to use MP3 format, since it is very popular. E.g. it is easy to find music or sound textures on the Internet.

Flash CS3 and CS4 provide some sounds in a library (Menu: Window -> Common Libraries -> TNT sounds). CS4 has a much better choice...

3 Sound imports to frames of the timeline

3.2 Attaching sound to a frame

You can attach sound to any frame via the properties panel

Ideally, each sound should have its own layer. This way it is much easier to control fade in/outs, when to stop etc. You also can see exactly how far the sound will extend on the timeline. Hit F5 or F7 (if you want to stop the sound) somewhere to the right.

In the configuration panel you can change certain parameters and also edit a bit.

Sync: Will defined how sound is synchronized with the timeline.

You can attach sounds to buttons in the same manner as above.

Manipulation of the sound envelope 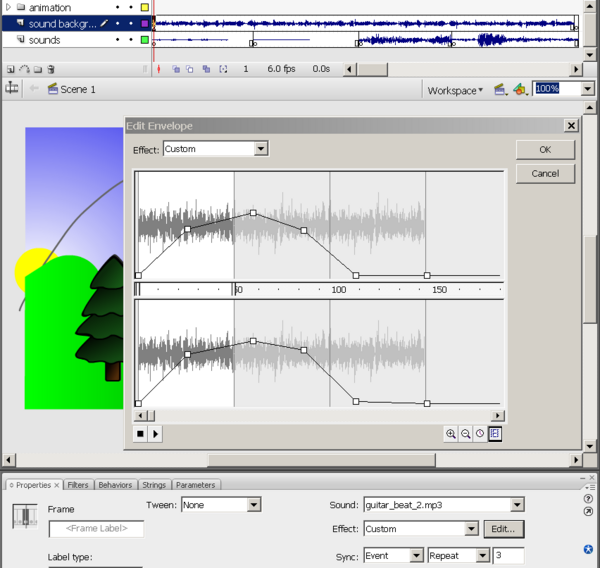 4 Load and play sounds with ActionScript

It is better to load sounds with ActionScript if your sound file is large, e.g. a background music or if you want to to trigger a sound as a result of some complex user interaction.

Insert this kind of code with F9 in the frame where you want if to load. Typically, use a frame in a layer called "action" or "script".

To load a sound from an external file:

Alternatively, to load a sound from the library:

To play your sounds:

To stop all sounds (this is a static method, just insert the line as is).

For an example used in the Flash drag and drop tutorial, look atflash-cs3-drag-and-drop-matching-3.*

This code snippet would start playing sound on load

For a button on and off: select the symbol which is aimed to be the button, in the frame where the on / off has to happen. Select the code snippet "click to play/stop sound" in the audio and video category. Give an occurrence name to your symbol and target your soundfile name instead of the flash example. For the sound to stop in the other frames, you can use the following action script in the frames you want the sound to be stopped.