Video components are prebuilt interface elements (widgets) that will speed up video integration. As explained in the Flash video component tutorial the FLVPlayBack Video Component allows to render videos in an easy way since it includes a nice choice of skins for user controls. Videos also can be enhanced with captioning, read the Flash video captions tutorial or they may interact with the rest of the animation. Some of these techniques require some some ActionScript as we shall explain here. As an alternative, you also can add a video to the main timeline, but this will create very large *.swf files and its therefore a technique that should be used with care. Finally, you also could program your own video interface using ActionScript, a topic that will not be covered here.

Learning goals
Learn how to create augmented videos, e.g. animations that are triggered by so-called cue points or buttons that allow the user to access specific frames in the video.

Moving on
Flash video captions tutorial Adding subtitles to a video
The Flash tutorials article has a list of other tutorials.

By "augmented video", we refer to several ways of adding some extra value to a video:

In this article we shall present two types of technologies:

2 Importing a video to the timeline

Instead of using the playback component as explained in the Flash video component tutorial we will include the video into the timeline (each video frame will be a timeline frame). This will allow us to create videos augmented with animations in an easy way.

If you embed a video into the timeline, then you don't get the ready-made video control as explained in the Flash video component tutorial. Therefore, only embed video in the timeline if you plan to add animations and if the video file is really small. Also you shouldn't care about smaller synchronization problems with the audio track.

Embedded video will make your timeline really long, although you can choose to have it its own timeline. Anyhow, in this example we took the "hundreds of frames" timeline option.

We will insert the video in frame #2. We also will add a play button that will jump to frame 2 and play the video.

Step 2 - Import the video as embed 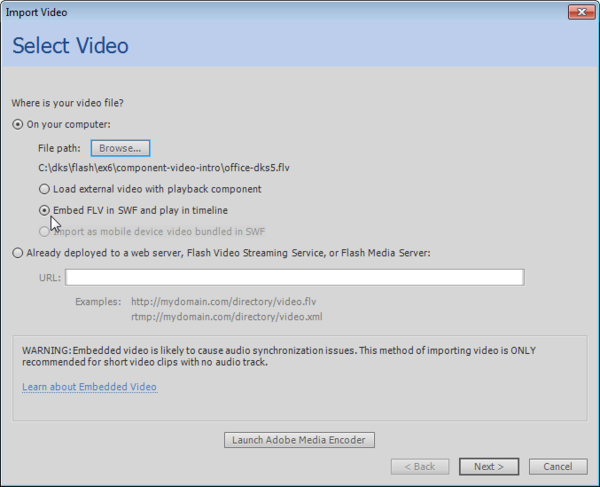 In our example we added three buttons for video control

Note: I noticed that when you import more than once a video, file size will grow a lot ! Probably a side-effect of the undo mechanism. So 'do not do this. If you notice this problem, save the file with "save as". The new version will be ok. (Maybe there is another solution to trim down file size).

Embedding video into the timeline makes sense (IMHO) if you are looking for an easy way to synchronize other animations with the video. This technique requires no more additional ActionScript knowledge than you need for simple animation and navigation. However, embedded videos will make the *.fla and the resulting *.swf really huge. 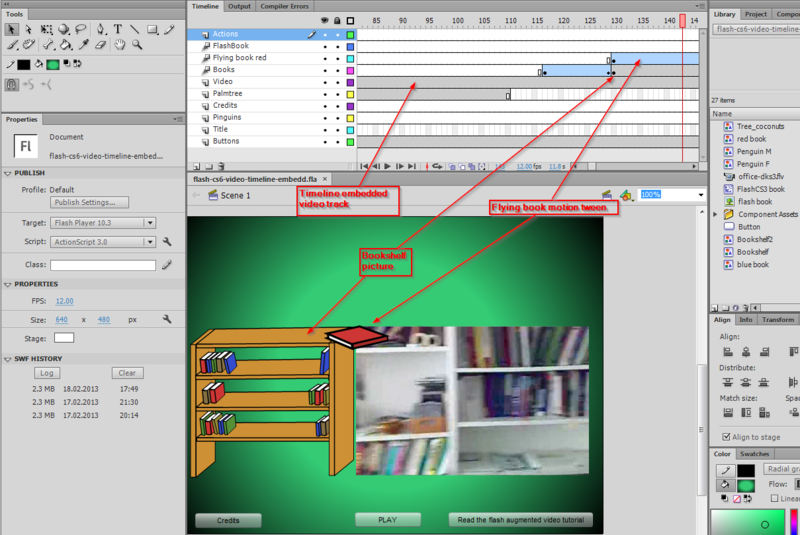 Embedded video with some animations

In this example, we add various animations (e.g. two motion tweens and a shape tween) to the project. Below you can see that books are tumbling out of a bookshelf while the video shows a "real" bookshelf.

Below is the action script code to implement a simple play button, plus two other ones that are not really necessary, i.e. a "credits" and a "goto ..." button.

All the rest are just simple Flash animations that are embedded in the main timeline.

Working with cue points is another way to have your video interact with the user and/or other animations. It's a slightly more difficult solution than using timeline videos as above, but more flexible and more elegant since the resulting flash files will be small and the (external) video could be put on a streaming server.

Let's recall what cue points are with some text that was copied and slightly adapted from Adobe's "use cue points".

A cue point is a point at which the video player dispatches a cuePoint event while a video file plays. You can add cue points to an FLV file at times that you want an action to occur for another element on the web page. You might want to display text or a graphic, for example, or synchronize with a Flash animation, or affect the playing of the FLV file by pausing it, seeking a different point in the video, or switching to a different FLV file. Cue points allow you to receive control in your ActionScript code to synchronize points in your FLV file with other actions on the web page.

An event cue point enables you to synchronize a point in time within the FLV file with an external event on the web page. The cuePoint event occurs precisely at the specified time. You can embed navigation and event cue points in an FLV file using either the Video Import wizard or the Adobe Media Encoder.

When a cuePoint event occurs, the cue point object is available in the event object through the info property.

In the following example we used the Media encoder to define most cue points, i.e. they are integrated in the *.flv video file. You also can add cue points in the properties panel after selecting the Flv playback component on the stage. The second solution is much less time consuming since you won't have to re-encode the video. However, cue points are less accurate.

Look first at this example

Then, you could also grab the source.

In order to understand this section, you must know how to use buttons. Read the Flash component button tutorial if you do not. 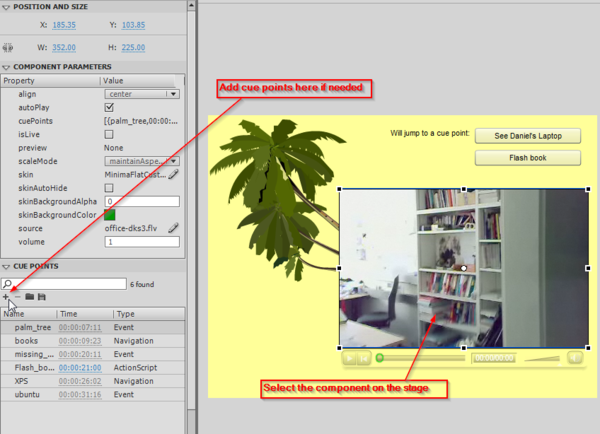 Now let's see how to implement a button that move the user to a given spot in the video. The logic is very similar as the one use for timeline navigation.

Below is code fragment that illustrate the principle. Note the two lines of code needed for navigation. In your own example, you would to replace video (the name of playback instance on the scene) and the name of the cue point, i.e. "XPS".

As a bonus I added some invisible trees that will become visible when the user jumps to the "XPS" cue point. These were imported from an SVG drawing and made it into a symbol. The instance on the stage was called trees. 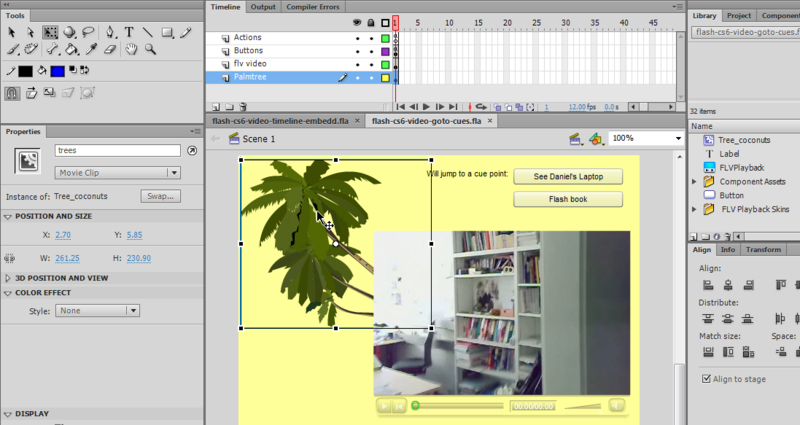 Below is the complete code that you also can find in the source file. To adapt this code to your needs: Change "XPS" to the name of your cue point. Replace the trees with any other graphics symbol or even an embedded movie clip

The code above works with any sort of cue points:

In some older textbooks, you might find instructions that will tell how to navigate to specific types of cue points. In particular you will find the two following variants:

For cue points that are encoded into the video with the Media Encoder, use:

For cue points that were defined in CS6 (either in the parameters panel or with ActionScript commands, use:

Our solution above that is also adopted by the code snippets assistant is more verbose, but works with all types of cue points....

Implementing animation that is triggered by the video's encounter of cue points works according to similar principles. Look at the example first:

You also could download the source code. However, make sure that you also grab the video or else, substitute your own.

5.1 Knowing all your cue points 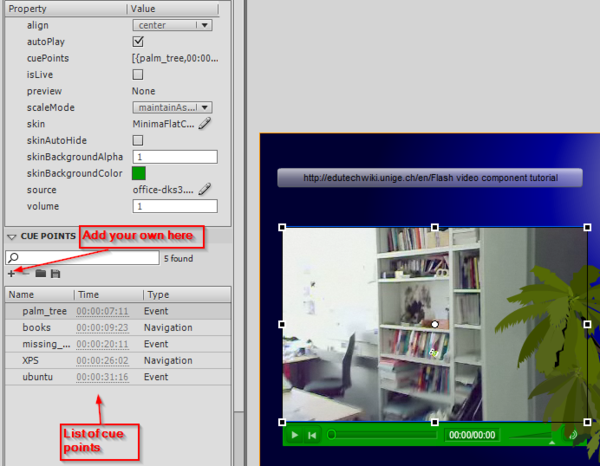 A more complicated solution is to to write a little program that tracks cue points. The following code will display a trace of all your cue points in the Flash CS6 output window. Alternatively To make it work:

When you play the *.flv video you can see these kinds of messages in the output window:

The plan is to trigger a series of stopped embedded movie clips with cue points. We will hide/stop these clips and then unhide/play them at given times. So let's create some Flash movie clips as explained in the Flash embedded movie clip tutorial. Of course, you could use clips that you already have in some other flash file.

Once you got one or more of these animations: 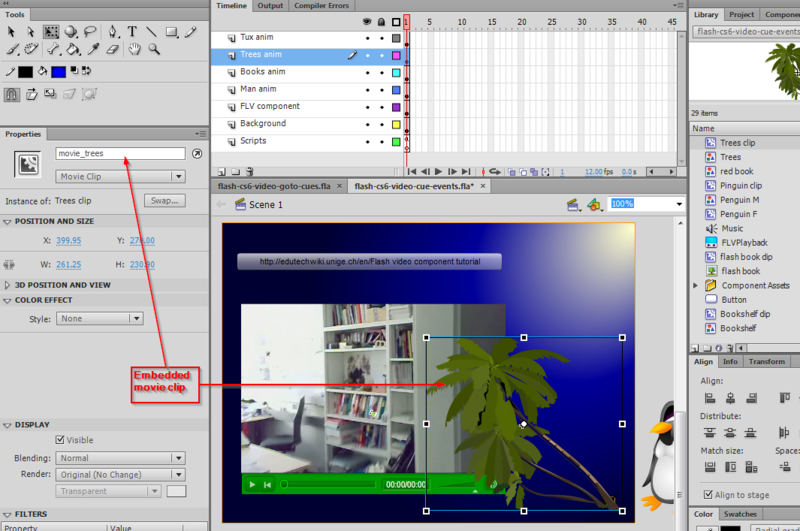 At the heart of cue point events management is an event handler that is registered, i.e. we use exactly the same principle as for user interaction with buttons (Flash button tutorial). Only this, time events are not generated by the user, but by cue points that will "emerge" when the video is played. Flash will have to watch out for these.

The cuepoint_listener function shown below includes a switch statement that deals with each event it receives.

Note about bout imported classes: Sometimes we have to tell Flash to import certain functionality. If you plan to work with cue points in ActionScript, then the following line is necessary:

If you want music textures, you can for example import a sound file into the library and then export it for action script (Right-click on it). Make sure you remember its class name. Else you can dynamically import sound from external files as shown in the Flash drag and drop tutorial.

So here is the complete code you can find in the *.fla file of this example:

Look at this first: flash-cs6-video-cue-events-exercise.html

Make this your own cue-points enhanced component video. Prerequisites:

Below is a copy of the AS3 code you should modify. It sits in the Actions layer.

7 Manipulating the video component with ActionScript

Below some more technical links which so far are not really used much in this tutorial.

All Artwork (clipart) is from:

Sound (except voice track on videos) is from:

The general section on cue point was copied from Let's recall what cue points are with some text that was copied and slightly adapted from Adobe's "use cue points". You also must cite this source if you reuse this material.