Quality
This text should technical people get going and may not be good enough for self-learning beginners. It can be used as handout in a "hands-on" class. That is what Daniel K. Schneider made it for...

Movie clips are Flash animations. In a *.fla file you can have several kinds of embedded movie clips behaving in a similar way.

2.1 Creation of an embedded movie clip

Let's now look a how to create flash movie clips within flash files.

To create a new movie clip within a flash animation file do the following:

Finally you also change the nature of symbols. E.g. to transform a graphic symbol into a movie clip:

2.2 The reference and center points 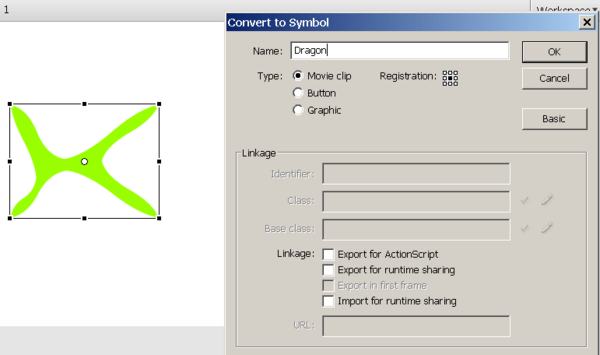 Anyhow, you later can change this reference point by moving the drawing to another place in symbol edit mode. By default a registration point is in the upper left corner. I personally like to have in the middle for objects that I will use in animations.

The white circle you can see in the middle of a movie clip is called the Center Point and has a similar function. It defines where the object will be attached to a motion guide or around which point it will rotate for example. You can move it to a different place with the Free Transform Tool.

There are two ways to edit a movie clip:

(1) In "stand-alone" view, i.e. you only will see the components of the movie clip. Double click on the movie symbol's icon (not it's name) in the library. You now can edit, e.g. a add a motion animation or change its drawings.

(2) Edit with the scene as background. If you put an instance of the movie clip on the stage and then double-click on this instance, you can edit the same movie clip symbol, but you will see the objects of the stage while you edit. This is quite handy if you plan to create some motion animation. Below is a screen dump of a situation where we edit a movie clip symbol after double-clicking on an instance of it that sits on the stage. The scene itself is somewhat visible (picture and buttons). 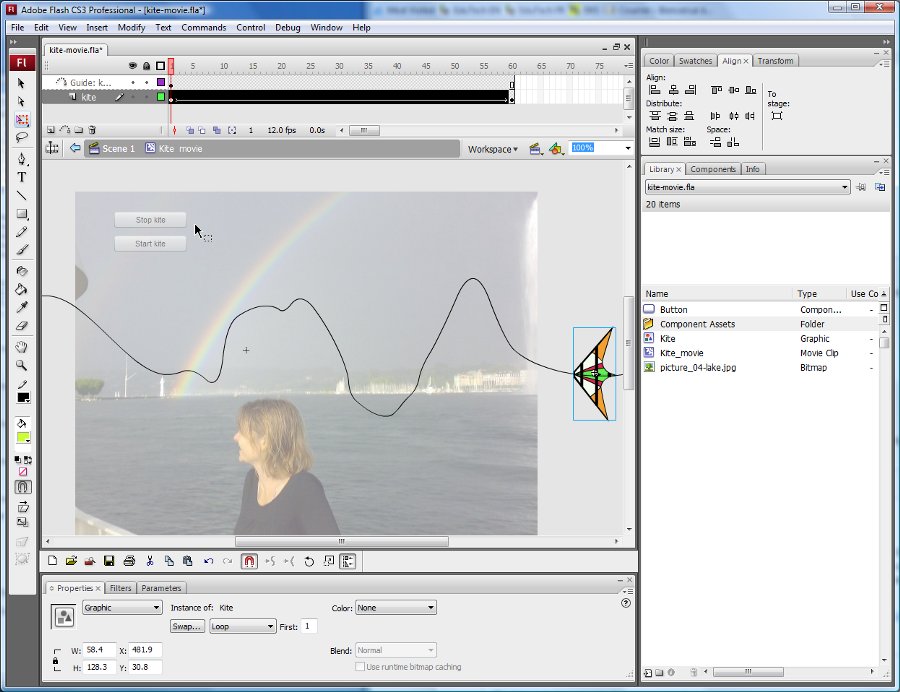 By editing a movie symbol you basically can do the all the stuff you have learnt about creating flash movies in previous tutorials, e.g. in the Flash motion tweening tutorial. In other words, movie clips have their own timeline as you can see in the above picture. There is a motion tween for the "Kite" drawing and a Motion guide layer. The whole thing is called the "Kite_movie" movie clip.

Do not forget to go back to the scene once you are done, e.g. by double-clicking on the "scene" in the edit bar (on top of the stage) or by clicking on the little "back arrow". When you edit a movie clip you are in symbol edit mode and you should not for example add navigation buttons that concern the whole scene. Make sure that you are aware at which level you edit and where to place objects !

Your whole *.fla also is a movie clip that you could in principle import to other Flash animations.

Firstly, have a look at the result, i.e. a flashing hello and little rocket with a pulsating engine. Both were made originally in separate *.fla files and then compiled (saved) to

The *.fla, *.swf and *.html files flash-cs3-rocket-hello.* as well as the imported movie clips can be found here: http://tecfa.unige.ch/guides/flash/ex/frame-by-frame-intro/

Step 1 - Import *.swf files into the library of a new Flash file

You now have a nice rocket and a flashing hello in your library: 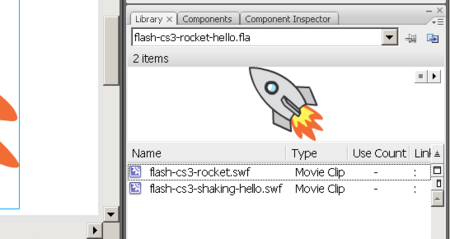 Hello and rocket movies in your library

Step 2 - Drag the symbols (movies) to the stage

Here is the result with a picture 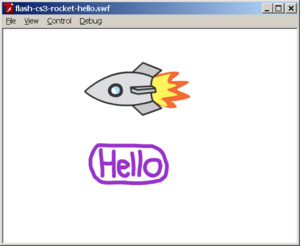 Of course, you then also could use imported movie clips within motion animations, e.g. as in this Flying rocket. Source code is flash-cs3-rocket-moving.fla

Important notice: Importing *.swf files will only work with very simple animations ! Instead of importing directly the *.swf you rather should consider the next strategy, i.e. use embedded movie clips.

If there is no instance of the movie clip on the stage, drag a movie from the library to the stage and then immediately give it an instance name. Remember that instance names must be symbols, e.g. movie_books, not something like movie of books. Use a letter, followed by other letters, numbers or the "_" sign only.

Let's assume that the instance name of a clip is movie_books. You now can use ActionScript code to do various things. For example:

Making it visible or invisible

Tip: Movie clips start playing as soon as they are found in the current frame. E.g. if you put them in frame one, they will play forever until the main timeline moves to another frame. If this is not desired, stop the movie as you may recall from other tutorials.

4.1 Creating an embedded movie clip from a non-embedded animation

Let's assume that you have an interesting animation in fla file that you rather would use as a embedded movie clip.

You now should see a blank stage be in symbol edit mode. Hold that.

You can either copy full layers or just selected frames.

Voilà, you now have an embedded movie clip. Go back to the scene.

Once you have a library of embedded movie clips you could create a library for later reuse.

This example shows how to play and stop an embedded movie clip with a component button. Look at the flying kite application to get an idea. See also the picture above in the previous section.

Step 2 - Drag it to the scene and name it

You should see something like in the following screen capture: 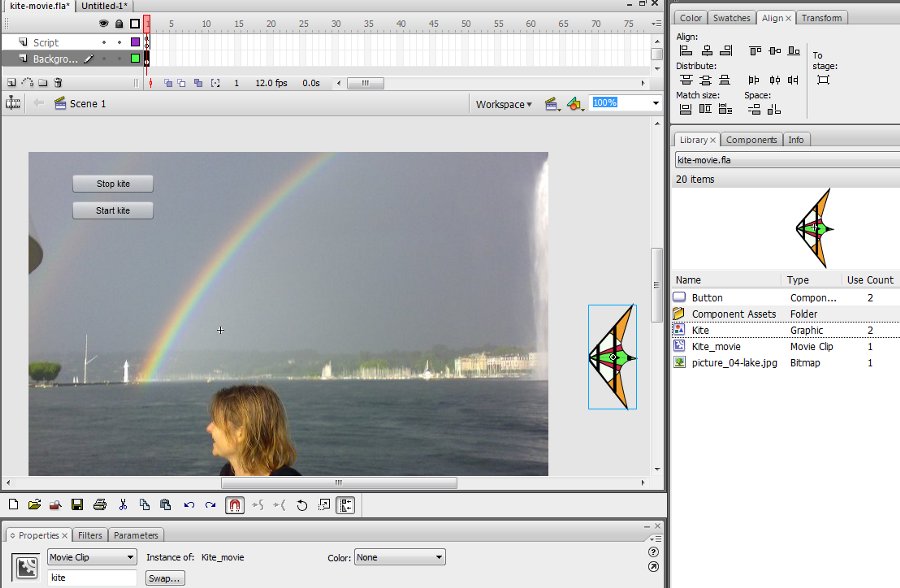 A scene with a movie clip instance

Step 3 - Create a guided motion tween for the movie clip 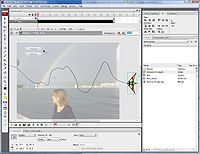 Really make sure that you exactly know at which level you edit. Look at the edit bar. It should read "kite movie".

You can look at this example. It's a solution of a final exam of a beginner's Flash course.

This application has 5 frames. The frames hold an entry/title page and 4 other pages with animations. Each "what's going on here ??" button in the other 4 pages will launch a movie clip.

If you feel that you need a more substantial exercise:

5 Multi-use of a movie clip for animations

Let's image that you want a sky-full of more or less the same animations. One solution is copy/paste/modify movie clips or movie clip instances. In some situations it is easier to do this with a little bit of ActionScript coding.

This examples shows how to use an embedded action script movie multiple times. We want some kites flying over the same picture from right to left.

To make it bit more interesting, we randomly change for each kite:

Have a look at the flying kites example now. If you prefer you can call it "flying bats".

Step 1 - Create a movie clip with a motion animation

To create new instances of a Movie clip with ActionScript and to add these to the scene, we have to do two things.

Normally, one also could position these kites now, but see below.

To play a movie clip, you can launch it with the "play" method:

However, in our case we have to write some more complex code, since we want to generate lots of kites. Instead of dragging kites on the stage and then name the instance of each kite, we create kite instances with ActionScript and put these into an array.

An array is variable with lots of drawers and within each we will store a kite instance. So, in order to store a kite movie clip we just go:

After that we then can modify its properties a bit, e.g. change the size and the position of the movie clip.

Finally we want our kites to appear one after each other and for this we use the setInterval function. It will call the addKite function, i.e. the kite movie clip factory, after each 500 milliseconds.

The addKite function will create new kite movies, modify them, add them to stage and launch them. But it only will do it 10 times. We have a counter that will increase:

And then the test will check if i is still smaller than 10 before doing anything:

Exercise: Make a snowflakes animation that goes from top to bottom

Notice: This program is not really elegant. E.g. the addKite function will be called every 0.5 seconds. Instead we could have used a timer that creates our N kites and then stops. But this would have required more programming...

6 Controlling the main time line from an embedded clip

Sometimes you need to control the main timeline from inside an embedded clip. E.g. you may want move the user to another frame as a result of some interaction. To do so you will have to tell the script inside a clip that you refer to an object or a method that is directly attached to the main timeline. Use something like:

MovieClip(root) in front of a property or a method basically tells Flash to go and look in the main time line instead of the current embedded clip.

In more technical terms you'll have to cast the root property into a movie clip. “.root is of type DisplayObject, and .parent is of type DisplayObjectContainer. Neither of those have multiple frames, so that’s why timeline control methods won’t work on them. All you need to do is cast root or parent to MovieClip (a subclass of both of those classes)”. (AS3: Main Timeline Control From Inside a Movie Clip, retrieved June 2007

.... this is vital "know how" for developing games and interactive educational applications where the main time line is usually just used to define various sub games/activities or maybe different states.