Nearly all of today's embroidery machines are computer controlled machines that will stitch a digitally created embroidery design.

The first computerized embroidery machines for consumers were introduced in the 1980's. As of 2018, a large choice of models and brands exist and prices have been dropping over the past years. E.g. a decent entry-level machine now costs about 600 Euros.

Computer-controlled embroidery machines have a “specially engineered machines that have a multi-needle fixed ‘embroidery head’ and a frame holder that moves the framed product (for example a garment like a Tshirt) in either of two directions so that the embroidery design can be sewn. The frame holder is known as a pantograph; think of it as a graph plotter because it moves to (plots) the exact location (co-ordinates) of the design expressed in x and y values. The design is created within a grid (known as a ‘field’) with x being the horizontal axis and y the vertical axis. Therefore any point on the design can be identified in values of x and y, a co-ordinate in this field would be written, for example, as x249,y786. The embroidery machine reads these co-ordinates from the design data file and moves its pantograph into position to receive each new stitch from the machines’ stationary needle head.” (An introduction to Computerized Embroidery, retr. June 2018)

Machine embroidery is part of some "making" cultures. For example, an embroidery machine is in the standard list list of fab lab equipment. This shows that

2 Criteria for selecting an embroidery machine

As of April 2011 (slightly revised in 2017). Information below can change rapidly and we may not update !

With respect to sewing and embroidery functionality we could distinguish four kinds of machines: 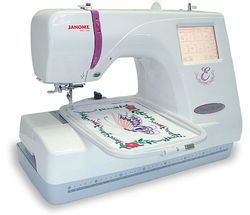 Mid-level machines work fine, but you have to change threads a lot and finishing (e.g. removing jump stitches) requires more work. Also, precision will not be the same. Entry-level machines usually have smaller stitching areas, smaller and simpler interfaces, and probably not as good mechanics.

A typical example (as of spring 2011) of a lower mid-level embroidery-only machine is the Brother Innov-is NV 750E. It costs about CHF 1500 or € 1100 (only about $800 in the US) and has a 18x13cm embroidery area (hoop). At the time of writing this model may probably offer the best feature for money ratio.

There are also cheaper models, however you may not find these in some countries. Low-end machines are often not sold in sewing shops, but in supermarkets and other mass let-outs. Good models seem to be the Brother Innov-is 90E (about € 600), the Brother PE-770 (at $670 on sale) or the Janome MC200E ($900). Even cheaper would be a Brother SE400 sewing/embroidery machine ($400). If you are low on budget, look out for special deals for end of series models. 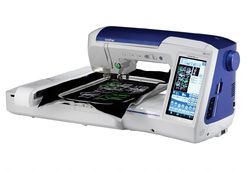 Most higher mid-level embroidery machines are also sewing machine (see next item). It seems that they don't offer better precision, but are more expensive because of the sewing functionality.

The choice for mid-level combi machines is enormous. There are differences in features and large differences in prices. I wonder, whether the difference in price doesn't reflect better mechanics but rather the better built-in LCD panel and software. Someone like me would not necessarily need that kind of on-board control, since we feel comfortable doing everything with a computer.

A higher mid-level machine would have a larger color screen, more stitches, more built-in software (both functionalities and designs). E.g. a Brother Innov-is 4000 or a Bernina Artista 640 with embroidery module would cost about CHF 6000.

A high end-end sewing/embroidery machine like the Bernina 830 or the Brother Quattro (same as Innovis I in Europe?) are in the CHF 8-10000 price range, e.g. similar as entry-level multi-needle embroidery machines. Some brand's high-end machines are a bit cheaper. e.g. the Elna 9600 "Haute Couture" and the practically identical Janome 11000 are about € 5000. According to one sales person we interviewed, high end machines are not necessarily better in terms of precision than mid-end machines. They just add extra functionality.

These machines feature a very large screen and advanced on-screen editing. Mechanics might be better, but we don't know. The problem that one has to change threads remains. These are probably dream machines for combined sewing/embroidery, but not necessarily for just embroidery. Read on if you plan to get a dream machine. 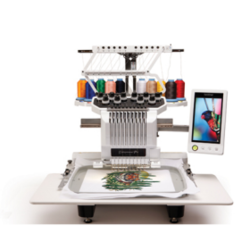 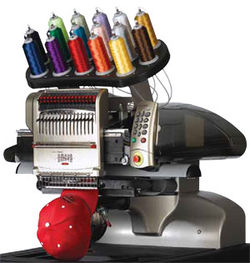 You then could look at simple industrial machines. These are faster, may have more needles and are of course more expensive. An entry level Tajima Neo II is about 14000$ in the US. Prices for that type of machine seem to differ a lot from shop to shop and from country to country.

Other machines like the Melco EMT16 can do 1500 Stitches/minute and stitch on most materials. It has less builtin editing i.e. design is entirely done with a computer. Maybe the simpler design makes these a bit more robust than the Brother PR 1050X who has more electronic bells and whistles, but I really do not know. This model has other advantages, e.g. the smallest arm, being able to print on 270 degrees, (optionally) more than one print head, etc. It also can be used in an industrial setting, e.g. several machines can run jobs from one PC. The 16 needle Bernina E-16 (is made by MELCO) and may cost the same as the equivalent MELCO Amaya EMT16 at around 17000 Euros.

In recent years, several Chinese manufacturers started offering 10 to 16 needle designs for attractive prices. We have no idea how well they are built and how long they last without revision. Therefore we recommend buying from a local reseller, unless you understand how to repair relatively complex machinery. Some of these brands seem to include semi-professional (i.e. smaller and easier to use) models, e.g. Lewanjoy seems to sell Brother PR clones (but the picture is maybe a mistake).

A Fuwei 15 needle industrial machine is sold for about 8000 Euros in France. Maison Broderie (also in France) sells a rebranded BAI 12 needle model for about 5500 Euros.

If you directly order from China, you have to include shipping costs (1000 to 2500 Euros) plus value added tax (which is high in most EU countries) plus custom fees. There are several brands that sell 12 to 16 needle machines in the 3-4K range, e.g. Holiauma, Lewanjoy, Baima (home),

I have no idea which types/brands are best, except that it is always better to buy from a shop nearby that also can repair a device. E.g. in Geneva I would not buy a Brother, since there is no authorized dealer. Please visit sewing / embroidery forums if you need advice from people who got experience. The following list includes most major brands (I believe) and some additional pointers. This section was probably last updated in 2012!

Some brands are owned by the same company. For example SVP owns Singer, Husqvarna and PFAFF and is the world's largest sewing machine company. Sometimes companies share development (for either the mechanical or electronic parts or both) or have an entire model made by another company. Difficult to know who exactly produces what...

However, some people have built hardware, that you could reproduce. For example, look at this embroidery machine with XY belt and pinion drive built by someone in 2014.

Or this lego NXT controlled sewing machine with XY movement, [1] built in 2014.

In this case the G0 controls the X,Y plotter to new location. And the change in Z is used to change the wheel location. So each stitch is treated as two commands. One to move the plotter then one to turn the wheel. There is very little to prevent additional G-commands from being utilized by a control board declaring some G-code value to perform a trim and supplying hardware to perform such an action. A considerable amount of modern embroidery uses things like jump stitches to block the needle bar specifically because each cycle much stitch and has limits to the distance traveled because there's only so far the stepper motor can move before the next stitch cycle. While slower, these modified sewing machine methods are quite effective. And could lead to more general and standardized approaches going forward.