The software also includes a little climate simulation model [1] that could be used in a school context to explain how simulations work.

The model is implemented as agent-based simulation: “Yellow arrowheads stream downward representing sunlight energy. Some of the sunlight reflects off clouds and more can reflect off the earth’s surface. If sunlight is absorbed by the earth, it turns into a red dot, representing heat energy. Each dot represents the energy of one yellow sunlight arrowhead. The red dots randomly move around the earth, and its temperature is related to the total number of red dots. Sometimes the red dots transform themselves into infrared (IR) light that heads toward space, carrying off energy.” ("How it works") [1]

It is important to understand that this is not a realistic simulation the earth's climate, but it can explain important modeling principles and also the role of important parameters in a climate model.

The Monash simple climate model home page [2] explains the model, includes some tutorials and allows to play with different scenarios and also to deconstruct models by switching offf some processes. According to the web site (retrieved April 2019), “the Monash simple climate model (MSCM) is based on the Globally Resolved Energy Balance (GREB) model, which is a physical climate model published by Dommenget and Floeter [2011] [3] in the international peer review science journal Climate Dynamics. The model simulates most of the main physical processes in the climate system in a very simplistic way and therefore allows very fast and simple climate model simulations on a normal PC computer. It simulates the global climate on gird of 96 times 48 points on three different vertical levels (surface, atmosphere and subsurface ocean). Despite its simplicity the model simulates the climate response to external forcings, such as doubling of the CO2 concentrations very realistically (similar to state of the art climate models)”

The GREB model can be summarized with the following tendency equation:

The Monash simple climate model website includes both resources and interfaces allowing to play with the model. An alternative website suggested for European users is mscm.dkrz.de/. It also is possible to run the software on your own server.

One included tool allows playing with various scenarios with respect to CO2 emission. The following screen capture shows the climate change scenarios interface. It allows visualizing the effect of some published (?) scenarios and one could compare two of these. 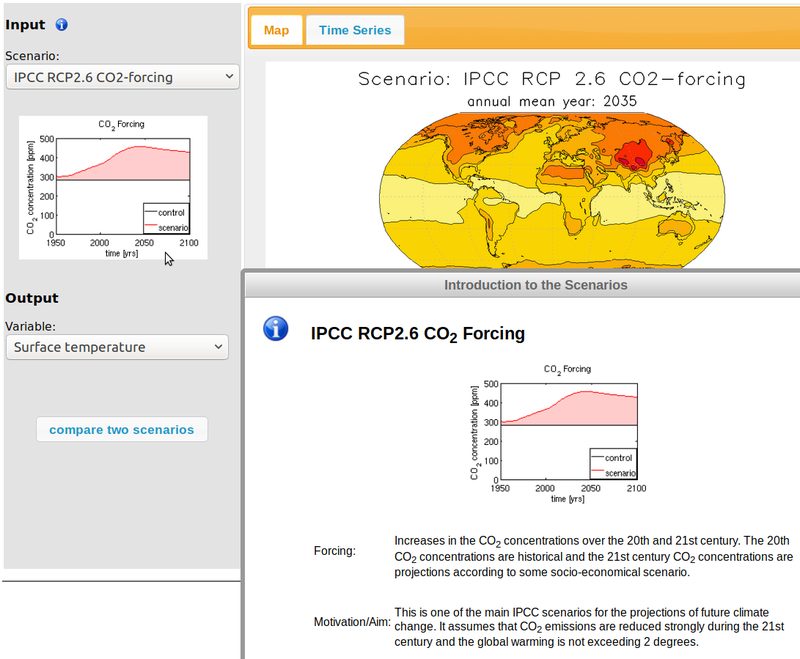 The deconstruction tools allow seeing what happens if one omits one or more parameters from the model. “In this interface you can deconstruct the Monash simple climate model by switching ‘OFF’ processes of the model. This will allow you to learn how the different processes in the climate interact to create the complex mean state climate as it is observed. The Interface can be used in two different complexity levels:” a 11 parameter standard version for students with a a climate physics backgrand and a six parameter basic version for school students.

For example, in the Deconstruct the Mean Climate interface, shown in the next screenshot, we removed ice albedo (reflection) and as result got more warming. 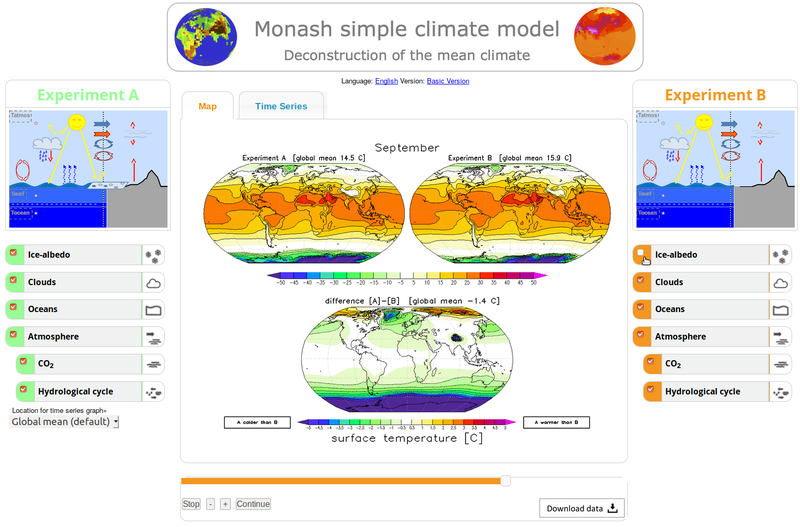 The next screenshot shows two experiments with the standard version of the Deconstruct the Response to 2xCO2 interface. 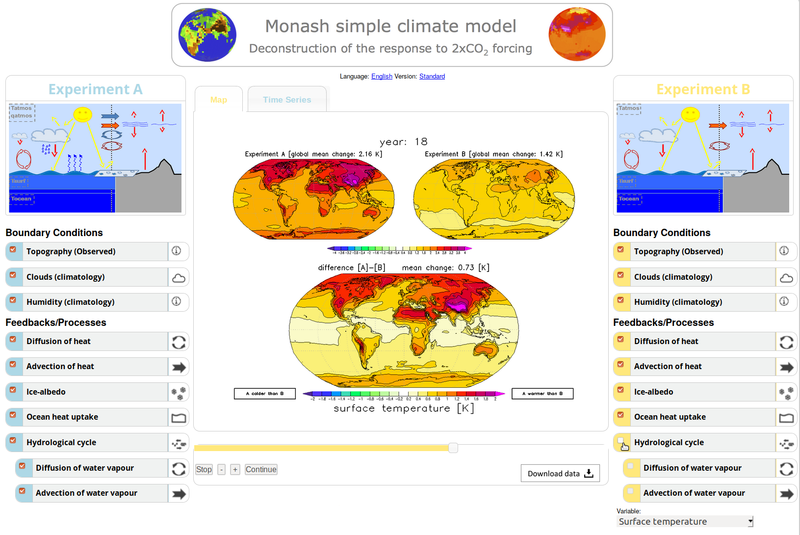 “In this interface [one] can deconstruct the Monash simple climate model response to doubling of the CO2 concentrations by switching ‘OFF’ processes of the model. This will allow you to learn how the different processes in the climate interact to create the complex climate response to anthropogenic CO2 emissions”. There are two complexity variants, a standard version with 10 parameters and a basic version with 5. The standard version allows for about 200 different experiments (not all on/off combinations are modeled). Version B without the hydrological cycle shows less warming of the surface temperature.

The web site include some walk-through tutorials that explain how to use the model interface and also provide background information. Popup blockers in your navigator must be disabled for this web site. 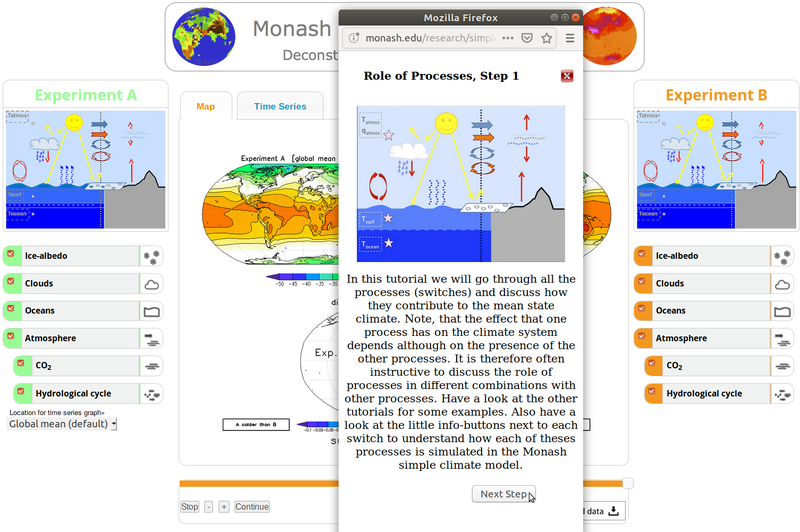 Professional environments also can be used in education, in particular in more advanced classes. But they do require an expert teacher. A number of open source and free environments exist. Below, a selection.

The Apache open climate workbench (OCW) allows playing with climate models and data from various sources, e.g. creating visualizations. Installation of this software may require some system administration skills. There is a simplified installation procedure for Ubuntu (dated 2015). We did not test to install OCW so far.

Another, older, definition of the project is on the Open Climate Workbench documentation platform: “The Apache Open Climate Workbench(OCW) is a comprehensive suite of algorithms, libraries, and interfaces designed to standardize and streamline the process of interacting with large quantities of observational data [...] and conducting regional climate model evaluations.”. Furthermore, “OCW consists of a Python library for common model evaluation tasks (e.g. area averaging, regridding, bias calculation) as well as a set of user-friendly interfaces for quickly configuring a large-scale regional model evaluation task. Users can interact with the OCW either by including the Python library directly in their code, or by way of the flexible RESTful Application Programmer Interface (API).” That means that this library also could run as web service.

The MITgcm (MIT General Circulation Model) is a numerical model designed for study of the atmosphere, ocean, and climate. Its non-hydrostatic formulation enables it to simulate fluid phenomena over a wide range of scales; its adjoint capability enables it to be applied to parameter and state estimation problems. By employing fluid isomorphisms, one hydrodynamical kernel can be used to simulate flow in both the atmosphere and ocean.

The software is free and available on GitHub. Using it requires advanced modeling skills.

“Isca is framework for the idealized modelling of the global circulation of planetary atmospheres at varying levels of complexity and realism. The framework is an outgrowth of models from GFDL designed for Earth's atmosphere, but it may readily be extended into other planetary regimes.” (about)

The purpose of this framework extends prediction of earth's climate. “Understanding climate is not synonymous with predicting or simulating climate. In order to provide the best possible predictions of Earth's weather and climate we need comprehensive models that provide simulations with the greatest possible degree of verisimilitude.”

The model, also allowing climate modelling of some other planets, has been described in Vallis et al. (2017) [4] and is available on GitHub.

There are many Wikipedia pages on climate change and climate modeling. For example:

The conversation has several interesting articles on climate science, some of which point to open source models and software.