Learning and developing through boundary-crossing activities is an important concept in transformative pedagogy as well as some forms of project-oriented learning instructional design models.

Though ICT opens a wide range of possibilities for the enhancement and support of learning, its effective impact is restricted by narrow conceptualizations of learning, based on three pervasive but problematic dichotomies, between :

Overcoming these dichotomies pointed out by (Virkkunen, 2003), forms part of a research agenda on transformative pedagogies.

2 Crossing boundaries between education and the workplace

Boundaries between informal and formal learning are equated to boundaries between education and the workplace : informal methods of learning are most often found in the work environment as a just-in-time answer to quick and frequent changes. Project-based and outcome-based learning, usually mediated by technology, are seen as techniques that a learner can take quick advantage of, using work-related resources. These methods are more student-driven and job-relevant than any formal options; they are also less time and money consuming than formal ones for which advanced learners have no time nor budget. Post-modern learners want to be considered mature enough to be responsible for their own learning, so that they can drive it in a meaningful, self-directed manner. 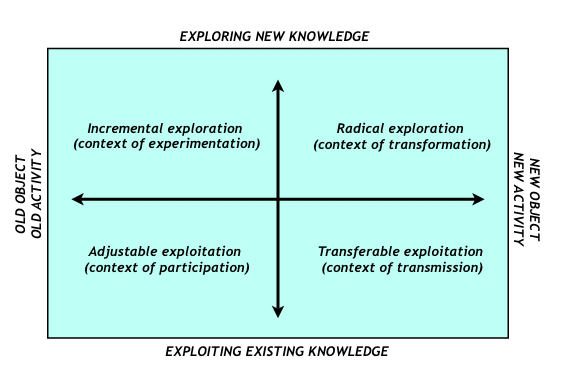 According to (Engeström (2004) quoted by (Ryberg & Dirckinck-Holmfeld, 2006), the emergence of new types of work organisation requires a better understanding of special learning modes. Though these modes of learning were specifically elaborated under the heading of workplaces (and mainly in advanced, developed, wealthy countries), we argue that the evolution of society makes them more and more relevant within educational settings, particularly those of developing countries where educational systems are often engaged in a combined process of development and restructuration while simultaneously operating according to previously defined rules1.

In the figure, the vertical and horizontal dimensions represent different learning modes: on the vertical scale, the approach goes from the exploitation of what is already known to the exploration of newly created knowledge. On the horizontal scale, it goes from the given context of activity to the emerging one. In a context of transformation, the North-East corner of this diagram represents learning as a knowldege creation activity.

The Developmental Work Research (DWR) is a methodology developed in Finland at the Centre for Historical Activity Theory of the University of Helsinki in Finland since the mid 1980s. DWR stands at the crossroad of education, knowledge management and knowledge creation, investigating the links between individual and social dimensions of learning and knowledge creation :

Nearly all authors emphasized that the most important aspect of human activity is its creativity and its ability to exceed and transcend given constraints and instructions [...] There has been very little research on creation of new artifacts, production of novel social patterns, and expansive transformation of activity contents. Vera John-Steiner (1985) work on creativity and the Developmental Work Research (DWR) approach originated in Finland may be mentioned as openings in this direction". (Engeström, 1999b, p.26-27)

Transformative pedagogies advocate developmental intervention methods such as DWR, for crossing boundaries between individual learning, collective learning and development of new organisational practices in educational institutions and systems. When applied in educational settings, DWR can serve as the basis of pedagogical approaches triggering changes requiring educational institutions to operate in a different way, based on concerted and continuous teamwork, according to new benchmarks of individual and collective performance, all paradigmatic changes putting at stakes learning in the knowledge society.

3.1 The role of creativity in development

Smolucha (1992) asserts that creative imagination is a goal-directed, culturally mediated psychological system that emerges from the internalization of children's play and the functional interweaving of fantasy and thinking in concepts. See creativity for more ...

3.2 Crossing boundaries between learning and the development of societal practices

Another important aspect of DWR is its "localism", striving to overcome the gap between the micro and the macro level of analysis cutting across most theoretical and methodological questions raised in the social sciences today :

The behavioral and social sciences have cherished a division of labor that separates the study of socioeconomic structures from the study of individual behavior and human agency. In this traditional framework, the socioeconomic structures look stable, all-powerful, and self-sufficient. The individual maybe seen as an acting subject who learns and develops, but somehow the actions of the individual do not seem to have any impact on the surrounding structures [...] More than ever before, there is a need for an approach that can dialectically link the individual and the social structure. (Engeström, 1999b, p.19)
[...] This approach implies a radical localism. The [...] fundamental societal relations and contradictions [...] are present in each and every local activity of that society. And conversely, the mightiest, most impersonal social structures can be seen as consisting of local activities carried out by concrete human beings with the help of mediating artifacts... (Ibid. p. 36)

Trying to explicit the dialectic link between the individual and the social structure, raises questions about another link, the one between learning and developing (competencies and knowledge but also subjectivities) and authority. As Engeström points out, the mightiest and most impersonal social structures are not desincarnated but rather personified by concrete human beings. Thus, DWR supposes that each individual engaged in knowledge development is implicitly committed to change. No single actor has the sole authority, no single actor is in a position of preventing the others to have an impact on their surrounding structures, which is not the case in most schools, nor in traditional classroom settings.

4 Curriculum as the ultimate limit of boundary-crossing

Far from a conception of the curriculum based on a "mind-as-a-container" vision, strongly criticised by many researchers (Wells, 1995; Bereiter, 2002; Paavola et al., 2004), one would like to see it as an evolving, socially constructed set of values and beliefs reflecting power relations between competing visions of the world and professional cultures.

The weight of the traditional vision of the curriculum conveying whole-class instructional methods, does not come only from abstract educational structures, but often from the teachers themselves. Amongst the numerous reasons explaining their reluctance to abandon traditional methods relying on individual seat-work, one finds the increasing pressure of accountability for delivering a centrally determined curriculum and for increasing the scores of their students on standardized tests of so-called basic skills and memorized items of information (Wells, 2000).

Vygotskyan theory, or social constructivism as we might call its application to education, thus calls for an approach to learning and teaching that is both exploratory and collaborative. It also calls for a reconceptualization of curriculum in terms of the negotiated selection of activities that challenge students to go beyond themselves towards goals that have personal significance for them (Vygotsky, 1978, chap.8). These activities should also be organized in ways that enable participants to draw on multiple sources of assistance in achieving their goals and in mastering the means needed in the process.

The immediate consequence of a reconceptualizing of the curriculum as a set of negotiated activities that have personal significance for the students, is the (re)-introduction in pedagogy of new forms of subjectivity, based on multi-voiced, negotiated visions of knowledge, subject to power relations determining what is to be considered the truth (Foucault, 1977) :

Bringing Foucault into relationship with Vygotsky highlights the way in which discursive regimes might influence the kinds of subjectivities that are constructed within a ZPD. A Foucauldian reading of activity in the ZPD suggests that what is developed in the zone is not only competencies, but also subjectivities, as discursive practices that construct such subjectivities are appropriated. Foucault politicizes Vygotsky without dismembering him. (Parkes, 2000b, p.10)

Power relations between competing educational cultures are not precisely something new. In the 1950s, Freinet was vigorously attacked by intellectuals of the french communist party for promoting a notion of school based on an outmoded rural ideal (localism), downplaying the role of the teacher (critical consciousness), stressing process rather than content (knowledge as a process, curriculum as set of negotiated beliefs and values) and exagerating the importance of children's spontaneous behaviour (creativity). Officially, the communist intellectuals accused him for creating illusions in teachers' minds by encouraging them to believe they could change the realities of school life in a world dominated by capitalism. But as Freinet's exegetes explain today, closer scrutiny shows that this conflict is better understood as a power struggle between the Freinet movement and the communist party for the allegiance the unionized teachers.

A more recent example is found in Taurisson's account of his experimental, activity-theory based, pedagogical organisation of maths and french classes in a secondary school, nowadays in France :

I had to bring myself to accept that an alternative organisation of the work in the classroom had to be done into hiding. When the inspector shows up, one needs to behave accordingly and play the "good teacher", respectful of ministerial instructions and official curriculum [...] There is no choice for one who wants to consider subjectivity as a part of the work of pedagogy, but to consider the subject's consciousness as the stowaway of pedagogy, in the same way Vygotsky had to consider it as the stowaway of psychology." (Taurisson, 2007, our translation)

In a new pedagogical perspective, knowledge can no longer be considered as the neutral content of pedagogy : transformative pedagogies must have on their agenda the process of knowledge creation, its facilitation, and its relation to power, at the periphery of "knowledge-as-a-product" based curricula.

5 The Zone of proximal development as strategic relationship

Parkes' response (2000b) to what he points out as a crisis in pedagogy draws on the work of Vare (1993) who depicts the zone of proximal development (ZPD) as a "strategic relationship", using Foucault's power-knowledge thesis in which all discourses are considered to construct subject positions and relations of power :

Where Vare becomes unique is in his use of the term "strategic" to describe the relationship between zone interlocutors [...] he uses the term "strategic" to convey "the way in which culturally based, tacitly and explicitly known power/knowledge relations constitute the negotiation process and, correlatively, help to constitute the resultant power/knowledge connections that participants construct" [...] He explicitly cites Foucault as the source of his notion of strategy. In "The subject and power", Foucault (1982:232) argues that strategy may be understood as "the totality of the means put into operation to implement power effectively or to maintain it." Further, he suggests that the word "strategy" may be defined in three ways: as "the means employed to attain a certain end;" as "the way in which one seeks to have the advantage over others;" and as "the procedures used in a situation of confrontation to deprive the opponent of his means of combat" (Foucault, 1982:231-232).

The reconceptualised ZPD describes a pedagogical relation that accepts multiple truth, subjectivities and agencies as the substance of pedagogy. By questioning the activity that takes place in the ZPD in terms of strategic encounter with the Other through which the Self is transformed, Parke's definition of the pedagogical relation allows us to re-state the pedagogical role and implication of developing countries knowledge communities (such as VCILT's) in the global context of large scale technology-enhanced educational projects.

The interpretation of Other and Self engaged in a ZPD strategic relationship is not limited to a child interacting with "an adult or more capable peer", it may as well be broadened, as Parkes suggests, to wider conceptual Others and Selves, such as knowledge communities, educational institutions or educational structures. In this respect, his Foucauldian reading of the ZPD provides emerging countries pedagogues with a powerful tool to activate developmental possibilities in fair strategic interaction with more capable countries; it also brings them closer to act as education stakeholders by empowering them to undertake educational transformations at their level, in their daily practice.

Parkes, R. J. (2000a). On the Subject of Pedagogies : Contributions of Vygotskian Theory to Radical Pedagogy as a Postmodern Practice, proceedings of Annual Conference of the Australian Association for Research in Education (AARE), Sydney University, December 4-7, 2000