Moodle 2.2 is out and it includes grading rubrics 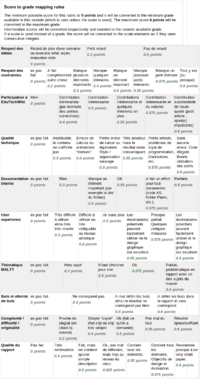 Upgraded to Moodle 2.2 yesterday. The LAMS and Mahara integration still work and the rest too :)

The grading tool is usable, although I find Moodle and other LMSs culturally biased and have to cope with this. Efficient people like the Swiss don't distinguish between grades and scores. I.e. we just define the min and max of the total performance indicators as grade. E.g. a score of 5.75 is the grade of 5.57 on our 0 to 6 grading scheme. Americans and Australians love to go through various stages like scores -> percentages -> grades. In addition they assume that good grading is done with respect to a mean score and standard deviation. I grade with respect to what I expect. E.g. for the very same class across years I could have a grade average of 5.75 out of 6 or 3 out of 6. I usually have a high 5.5 since the weak and lazy ones just give up our degree program before the classes end. Of course, an assignment or exam may turn out to be too hard. In that case I just adjust the rubric, e.g. add a linear coefficient or something. In other words: I really would like future implementations allowing teachers to define how the score is computed, e.g. "their way" or with simple formula like:

Since it's much easier for a student to understand a grade he gets for each performance criterion, one also ought to be able to add a weight to each. Right now you add weight just by choosing different performance indicator values.

Anyhow, this percentage/distribution thing makes using Moodle a pain for people who think simple. I much prefer the simple BlackBoard rubric system and I don't care much for either LMS with respect to anything else since I only use LMSs for assignment management, grading and occasionally running a LAMS sequence. However, I do teach Moodle since, overall, it's one of the better systems around and since in Moodle 2.x even document management somewhat works (that's what most teachers do with an LMS).

Read Grilles d'évaluation dans Moodle if you understand french. It tells how to get grading work done with a minimum of hassle. The bottom line is the following: